A 19-year-old domestic abuse victim from Honduras, profiled two weeks ago on PBS NewsHour Weekend, will receive another opportunity to seek refuge in the United States. 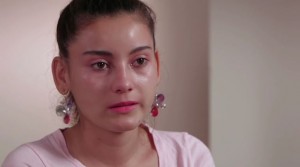 Lilian, who shared her story with the PBS NewsHour, was denied a bid to stay in the U.S. in May.

Three members of the US Board of Immigration Appeals ruled this week that Lilian — we’ve withheld her last name for safety reasons — and her four-year-old son will have their cases reopened based on “ineffective assistance of prior counsel.”

“I’m very happy,” Lilian told PBS NewsHour by phone from a third country where she and her son are now in hiding.

“I’m extremely grateful to all the people who helped us,” she said.

Lilian originally fled Honduras in 2014 to escape her boyfriend who she said began beating and raping her when she was 13 years old. After she and her son crossed the US-Mexico border last fall, US immigration officials detained them for eight months. Her bid to stay in the US was initially denied in May.

Lilian was part of a wave of thousands of Central America women and children fleeing gang and drug related violence in Honduras, Guatemala, and El Salvador last year. In an interview this September in Honduras, Lilian told NewsHour’s John Carlos Frey her boyfriend tracked her down when she tried to escape and threatened to kill her and her family.

“He’d threaten me if I spoke to the police or made charges against him,” she said. “He threatened to set fire to the house. Since I was a little girl, I was really afraid. I was afraid of him for a long time.”

But just being a victim of violence often isn’t adequate to qualify for asylum, the legal mechanism allowing people fleeing persecution to live in the US and eventually seek citizenship.

“If, for example, you were in danger of being killed because someone had a personal grudge against you,” said former US immigration official Stephen Legomsky, “or even because a youth gang is angry at you for refusing to join their ranks, the present case law is that you generally would not qualify for asylum.”

But last year, the Board of Immigration Appeals granted asylum to a domestic abuse victim from Guatemala, saying she was part of a protected social group under US asylum law. Lilian’s current lawyer in the US, Bryan Johnson, says he will use that precedent to re-argue her case.

A court date has not yet been set.

“This has been a very long journey, and I’m just ecstatic,” Lilian said. “This is something that I’ve wanted for a long time.”