AL-OMAR OIL FIELD BASE, Syria — Islamic State militants are preventing more than 1,000 civilians from leaving a tiny area still held by the extremist group in a village in eastern Syria, a spokesman for the U.S.-backed Syrian militia fighting the group said Sunday.

“Regrettably, Daesh have closed all the roads,” Mustafa Bali, a spokesman for the Kurdish-led Syrian Democratic Forces, told The Associated Press, referring to IS by its Arabic acronym.

SDF officials have said the extremists are hiding among civilians in a tented village and using a network of caves and tunnels. IS, which once ruled a proto-state in large parts of Syria and Iraq, is clinging to an area less than a square kilometer (square mile) in the village of Baghouz, in eastern Syria. 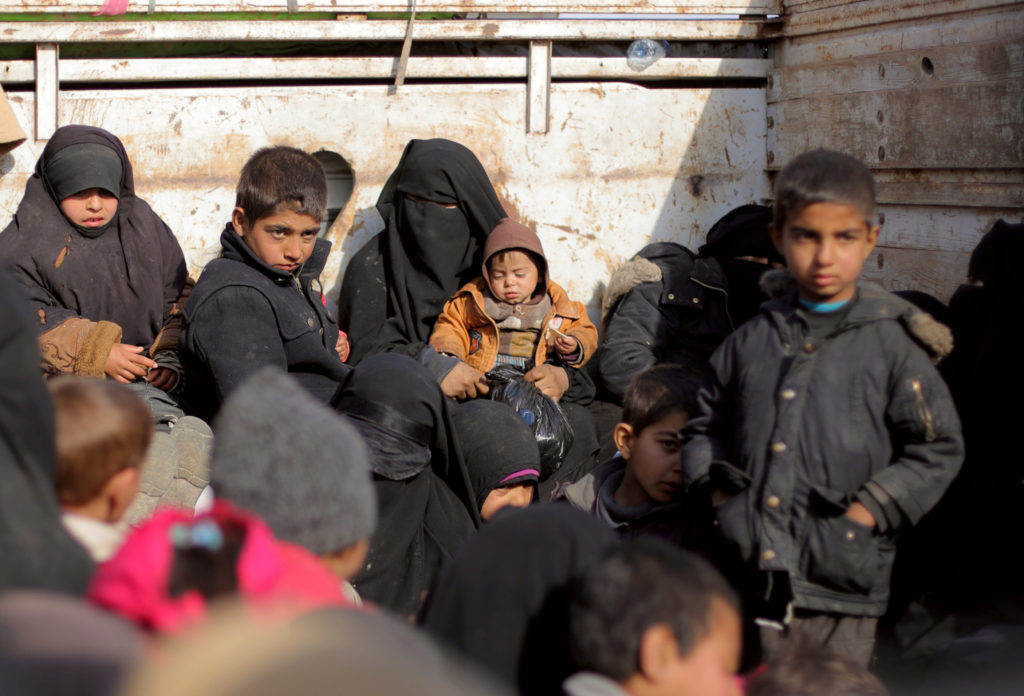 Women and children sit at a back of a bus near Baghouz, Deir Al Zor province, Syria February 11, 2019. Photo By Rodi Said/Reuters

The extremists may include high-level commanders, and could be holding hostages among those trapped inside.

Occasional coalition airstrikes and clashes continue inside the village of Baghouz. Artillery rounds were meant to clear land mines for the SDF fighters to advance. SDF commanders say the end of IS’ self-declared caliphate is near.

“We will very soon bring good news to the whole world,” Ciya Furat, an SDF commander, said Saturday at a news conference at the al-Omar Oil Field Base, miles away from Baghouz in the Deir el-Zour province.

The capture of the last pocket of territory held by IS in either Syria or Iraq would mark the end of a devastating four-year global campaign to end the extremist group’s so-called caliphate. At the height of their power in 2014, the extremists controlled nearly a third of both countries.

But experts and U.S. defense officials warn that the group still poses a major threat and could regroup within six months if pressure is not kept up.

Thousands of IS fighters and their families have emerged from the last bastion held by the group in the past few months. The SDF is holding around 1,000 foreign fighters in lock ups and camps in northern Syria, and their fate is a major concern, particularly as American troops prepare to withdraw from Syria.

The Kurds want their countries to take them back, and the U.S. has called on Europeans to repatriate and put them on trial.

“The United States is asking Britain, France, Germany and other European allies to take back over 800 ISIS fighters that we captured in Syria and put them on trial. The Caliphate is ready to fall,” Trump posted. He suggested the alternative would be that the U.S. would be forced to release them.

“We do so much, and spend so much – Time for others to step up and do the job that they are so capable of doing. We are pulling back after 100% Caliphate victory!” he added.

Bali, the SDF spokesman, declined to comment on Trump’s statement.