U.S. defense chief: Killing of writer is threat to stability

Mattis never mentioned Saudi Arabia directly in connection with the Oct. 2 slaying of Khashoggi at the kingdom’s consulate in Istanbul, Turkey. But he noted that Secretary of State Mike Pompeo revoked visas of Saudis implicated in the killing of the Washington Post writer, and he said additional measures will be taken.

Turkish officials have said that a Saudi team of 15 men tortured, killed and dismembered the writer and in a premeditated act. The kingdom initially said it knew nothing about what happened to Khashoggi, but on Thursday said evidence shows that the killing was premeditated.

Mattis made no move to directly blame Saudi and did not refer to the calls from members of Congress to cut arms sales to Saudi Arabia or impose sanctions on the kingdom. But his broader mention of the matter toward the end of his speech underscores the serious national security ramifications the incident poses for relations with a key U.S. ally.

“With our collective interests in peace and unwavering respect for human rights in mind, the murder of Jamal Khashoggi in a diplomatic facility must concern us all greatly,” Mattis told international officials and experts at the Manama Dialogue. “Failure of any one nation to adhere to international norms and the rule of law undermines regional stability at a time when it is needed most.”

He added that he will continue to consult with President Donald Trump and Pompeo as they consider the broader implications of the matter.

Saudi Foreign Minister Adel Jubeir, who spoke after Mattis at the conference, said hysterical media are rushing to judgment in the Khashoggi case.

“Unfortunately there has been this hysteria in the media about Saudi Arabia’s guilt before the investigation is completed,” he said, in response to questions about the killing. “What we say to people is wait until everything is done” then decide if the investigation was serious or not.

He said that the kingdom will hold those responsible accountable and put mechanisms in place to ensure this doesn’t happen again. “We will overcome” the consequences of the Khashoggi killing, he added.

Still, Mattis’ speech also reflected the difficult dilemma this has caused. In one section deeply critical of Iran, he referred to the ongoing attacks on Saudi by Iranian-backed Houthi militants in Yemen.

“I reiterate U.S. support for our partners’ right to defend themselves against Iranian-supplied Houthi attacks on their sovereign territory, and at the same time call for an urgent end to the fighting,” Mattis said.

Others in the U.S., however, have condemned the Saudis for what has been called indiscriminate bombings that have slaughtered civilians. Mattis and others, meanwhile, have said the U.S. is providing key support to the Saudi-led coalition, and that the assistance is helping the kingdom improve its targeting.

The U.S. he said, wants to continue to build the capacity of the Yemeni security forces who are batting the Houthis in a brutal civil war.

Mattis also later talked about America’s shared interests with its Arab and Israeli partners, adding that “our respect for the Saudi people is undiminished.”

But, he cautioned that respect “must come with transparency and trust.” 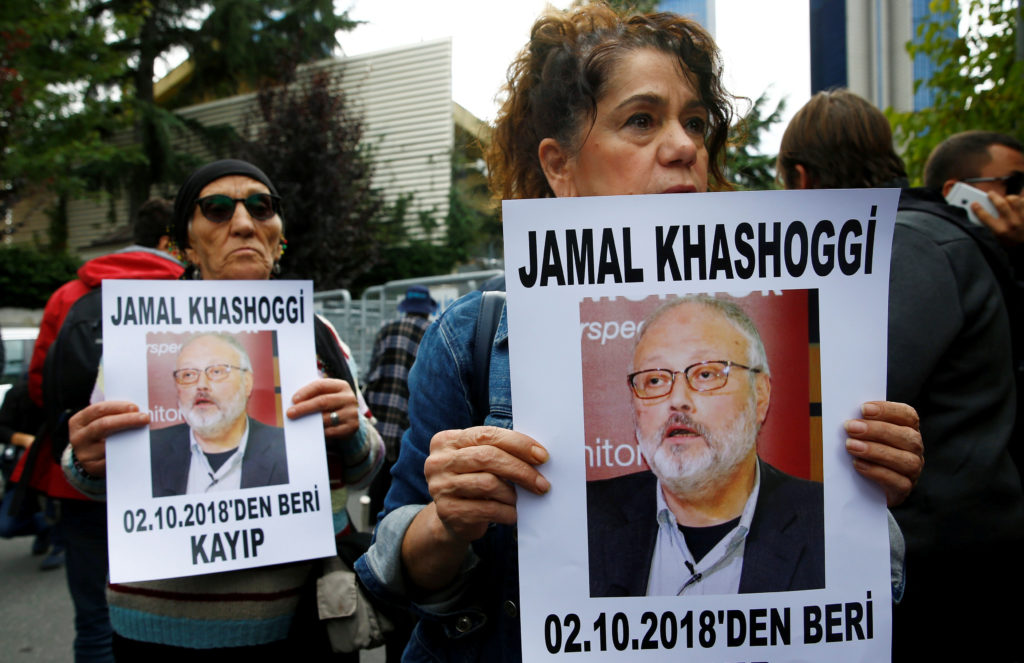 Saudi Arabia’s slow shift to reveal more details about the killing also reflects the kingdom’s acknowledgement that the killing could have a serious diplomatic, and possibly economic impact.

Khashoggi lived in self-imposed exile in the U.S. for the past year and wrote editorial columns for The Washington Post that were critical of Saudi Crown Prince Mohammed bin Salman, the kingdom’s heir apparent. He lived in self-imposed exile in the United States for nearly a year before his death, had written critically of Prince Mohammed’s crackdown on dissent.

He repeated his frequent criticism of Iran’s “outlaw regime,” which has fueled insurgencies in Yemen and Iraq, backed Syrian President Bashar Assad’s brutal government and fostered proxy terrorists across the region.

And he made clear that the U.S. commitment to the region outpaces any presence by Russia, which he said lacks essential moral principles.