The move comes even as Japan’s defense minister, whose country feels threatened by repeated North Korean missile launches, told Esper “no one could be optimistic about” changing the North’s behavior.

The statement by Japan’s defense chief, Taro Kono, was a stark illustration of the difficulties facing the U.S. and its international allies and partners as they struggle to get North Korea back to negotiations to eliminate its nuclear weapons and missiles. Talks launched by President Donald Trump in 2018 have stalled with no resumption in sight.

Although the U.S. military for years as called its joint military exercises with South Korea an important means of keeping troops and commanders ready for combat on short notice, Trump has called them a waste of money and a provocation to the North.

Esper announced the postponement of the military exercise at a joint news conference with his South Korean counterpart, Jeong Kyeong-doo. They were in Bangkok to attend an Asia defense ministers’ conference.

Esper insisted the postponement was not a concession to North Korea but rather an attempt to “keep the door open” to diplomacy to eliminate North Korea’s nuclear weapons. 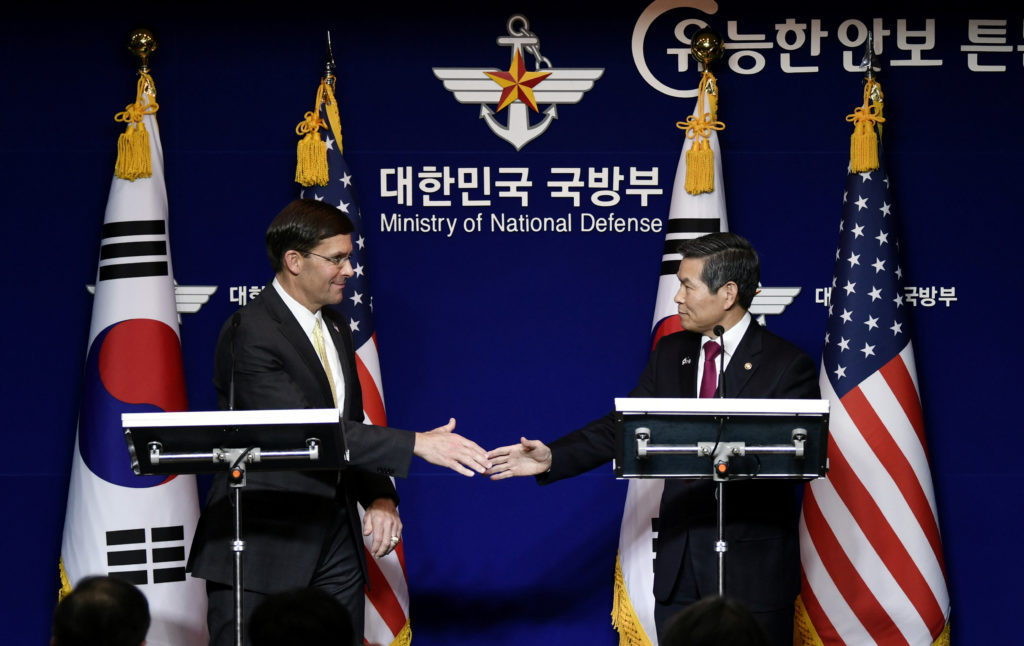 “I see this as a good-faith effort by the United States and the Republic of Korea to enable peace, to shape … to facilitate a political agreement – a deal, if you will – that leads to the denuclearization of the Korean peninsula,” Esper told reporters.

North Korea hardly seemed ready to reciprocate. Shortly after Esper and Jeong spoke, the North Korean foreign ministry issued a written statement of defiance. It said it has no plans to negotiate over its nuclear programs, even if talks were to resume, unless the U.S. offers to first discuss the withdrawal of its “hostile” policies against Pyongyang.

The North also has harshly criticized U.S.-South Korean military drills as provocative and as preparations for an invasion.

Kono, the Japanese defense minister, met with Esper and Jeong after they made their announcement. In remarks with reporters and photographers present, Kono said it was important that the three nations consult closely “under the current situation where no one could be optimistic about North Korea.”

He added that the North Koreans have launched “more than 20 missiles this year including new types of missiles as well as a submarine-launched ballistic missile” in violation of U.N. Security Council resolutions.

Kono called North Korea “a serious threat to peace and stability” in Japan and across the region.

Esper told reporters he did not consider the postponement a concession to North Korea, although it follows earlier cutbacks in the scale and prominence of U.S.-South Korean exercises.

“We have made this decision as an act of goodwill to contribute to an environment conducive to diplomacy and the advancement of peace,” Esper said.

As recently as Friday, when Esper was in Seoul to consult with South Korean officials, there was no word on postponing the military air exercise, which had been called Vigilant Ace.

Seoul and Washington had scaled back the exercise recently and changed the name, but North Korea strongly objected, calling it evidence of a lack of interest in improving relations.

Jeong said the exercise had been put off pending further consultations between Seoul and Washington. No new date has been set.

Esper said Seoul and Washington encourage North Korea “to demonstrate the same goodwill” as it considers decisions on its own military training, exercises and testing.

He also urged the North to return to the negotiating table “without precondition or hesitation.”

Esper said that even without the planned exercise of South Korean and American air forces, both militaries “will remain at a high state of readiness” for potential combat.