ISLAMABAD — A fresh round of talks between the U.S. and the Taliban began in Qatar on Saturday, just days after U.S. Secretary of State Mike Pompeo said Washington is hoping for an Afghan peace agreement before Sept. 1.

Taliban spokesman Zabihullah Mujahid confirmed to The Associated Press that negotiations had begun. Originally scheduled to begin in the morning, the two sides sat down mid-afternoon for the seventh time in a series of direct talks that began last year following the appointment of U.S. peace envoy Zalmay Khalilzad.

As in previous talks between Khalilzad and the Taliban, the focus is on the withdrawal of U.S. troops and Taliban guarantees to prevent Afghanistan from again hosting militants who can stage global attacks. Both sides say they have come to an understanding on the withdrawal and the guarantees but details have yet to be worked out.

The protracted war in Afghanistan began in 2001 to unseat the Taliban and hunt down al-Qaeda leader Osama bin Laden and his followers, who carried out the 9-11 attacks in the United States while operating in Afghan territory. After nearly 18 years and billions of dollars spent, the Taliban control or contest roughly half of Afghan territory.

In the Afghan capital of Kabul last week, Pompeo said “real progress” had been made on a draft agreement with the Taliban to ensure “that Afghan soil never again becomes a safe haven for terrorists.” 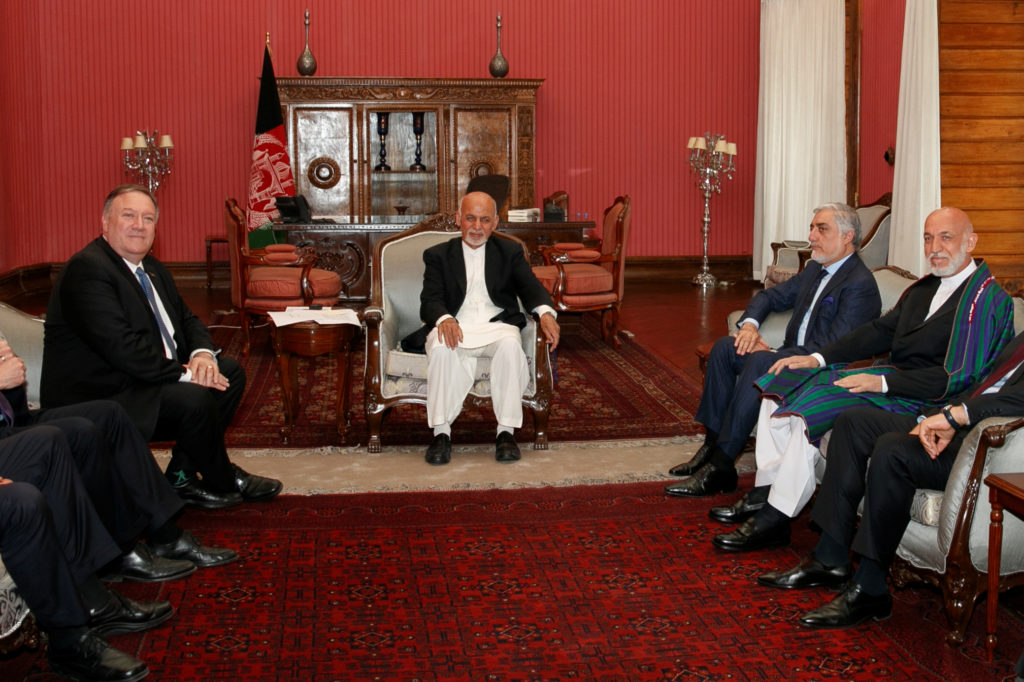 Both Khalilzad and Pompeo have said that agreements with the Taliban will come hand in hand with understandings on an intra-Afghan dialogue and a permanent cease-fire. It was expected that a timetable would be among the discussion points in the Doha talks.

The Taliban’s negotiating team has been led by Mullah Abdul Ghani Baradar, who co-founded the Taliban movement with its leader Mullah Mohammad Omar, who ruled with an iron fist, imposing a strict brand of Islam. Omar died several years ago, while Baradar has been held in a Pakistani jail since 2010 until his release earlier this year.

The Taliban have refused to meet directly with President Ashraf Ghani’s government but have held several rounds of talks with a collection of Afghan personalities from Kabul, including former president Hamid Karzai, several prominent opposition leaders and government peace council members. Both those meetings were held in Moscow earlier this year.

The Taliban say they will meet with Afghan government officials but only as ordinary Afghans and not representatives of the government until an agreement with the U.S. is finalized, saying the U.S. is the final arbiter on the Taliban’s biggest issue of troop withdrawal.

Khalilzad has been in the region for several weeks meeting a legion of regional and Afghan officials, including Ghani. He has been relentless in his pursuit of an intra-Afghan dialogue after an earlier planned meeting between the government and the Taliban in Doha was scuttled when both sides disagreed on who should participate.

The Taliban have also refused a cease-fire. Taliban officials who have spoken to the AP say they won’t agree to a cease-fire until troop withdrawal is in place. That’s because returning Taliban fighters to the battlefield if the U.S. reneges on its promises could be difficult. Taliban officials spoke on condition they not be identified because they are not authorized to speak to the media.

Also on Saturday, Afghan authorities accused the Taliban of killing at least 25 pro-government forces in northern Baghlan province. The Taliban, who have stepped up attacks in recent months against Afghanistan’s beleaguered national security personnel, said the attacks were retaliation for earlier attacks on their fighters.