A mixed crowd of hardcore protesters in black and wearing masks, along with families with children, spilled into the roads of the Causeway Bay shopping belt and marched for over 2 kilometers (1.2 miles) to the central business district. Some waved U.S. and British flags, while others carried posters reiterating their calls for democratic reforms.

Police had turned down a request by the Civil Human Rights Front to hold the march, but the demonstrators were undeterred, as they’ve been all summer.

“I feel this is our duty. The government wants to block us with the ban, but I want to say that the people will not be afraid,” said one protester, Winnie Leung, 50. 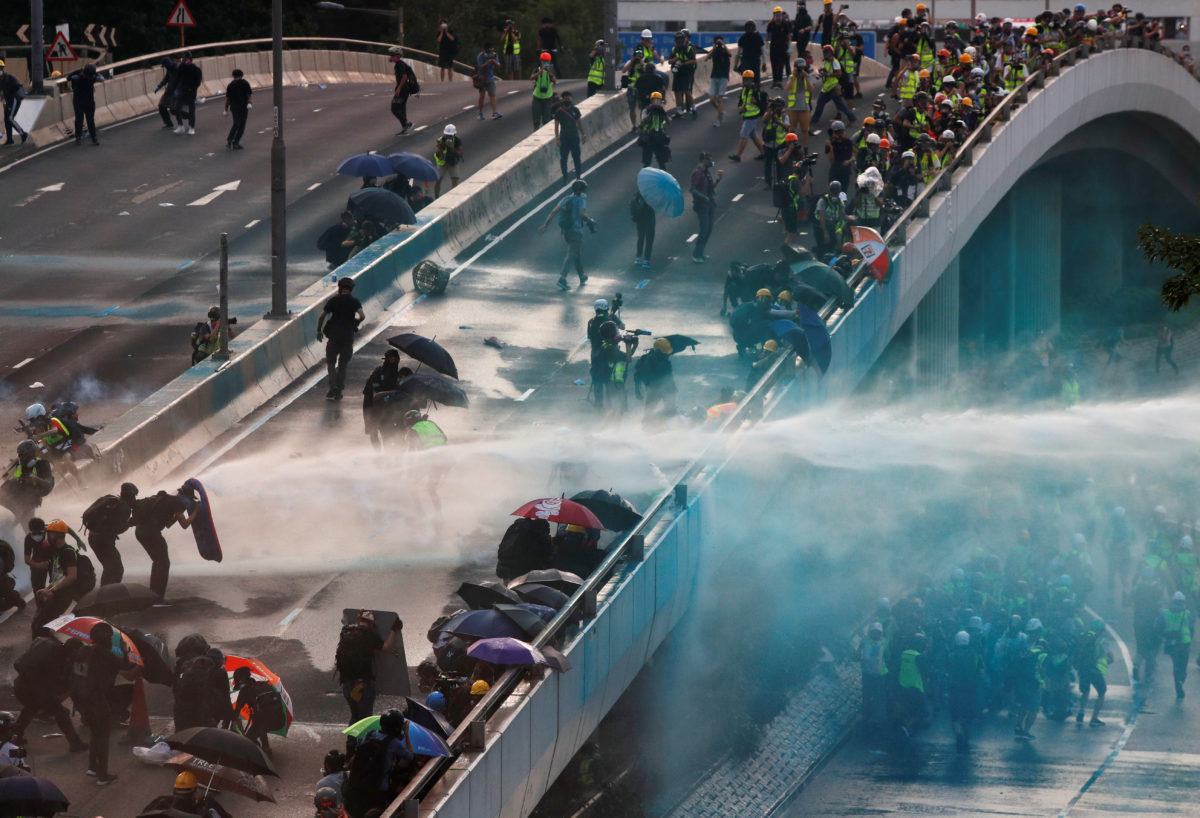 Anti-government protesters are sprayed with water cannon by the riot police during a demonstration near Central Government Complex in Hong Kong, China, September 15, 2019. Photo by Jorge Silva/Reuters.

Protesters burned Chinese flags and tore down banners congratulating China’s ruling Communist Party, which will celebrate its 70th year in power on Oct. 1. In familiar scenes, some protesters smashed glass windows and surveillance cameras at a subway station exit.

Hundreds of protesters later targeted the government office complex, throwing bricks and gasoline bombs through police barriers. Police responded by firing volleys of tear gas and using water cannon trucks to spray chemical-laced water as well as blue liquid that helped them identify offenders, in a repeat of confrontational scenes from the last several weeks of the protests.

Protesters retreated but regrouped in the nearby Wan Chai neighborhood, setting fires outside a subway station exit and on the streets. They fled again after riot police advanced and the cat-and-mouse battles went on for a few hours before calm returned.

Police fired tear gas again later in the nearby North Point area after protesters obstructed traffic after brawling there earlier with pro-government supporters.

Hospital authorities said eight people were injured throughout the day, including three in serious condition. 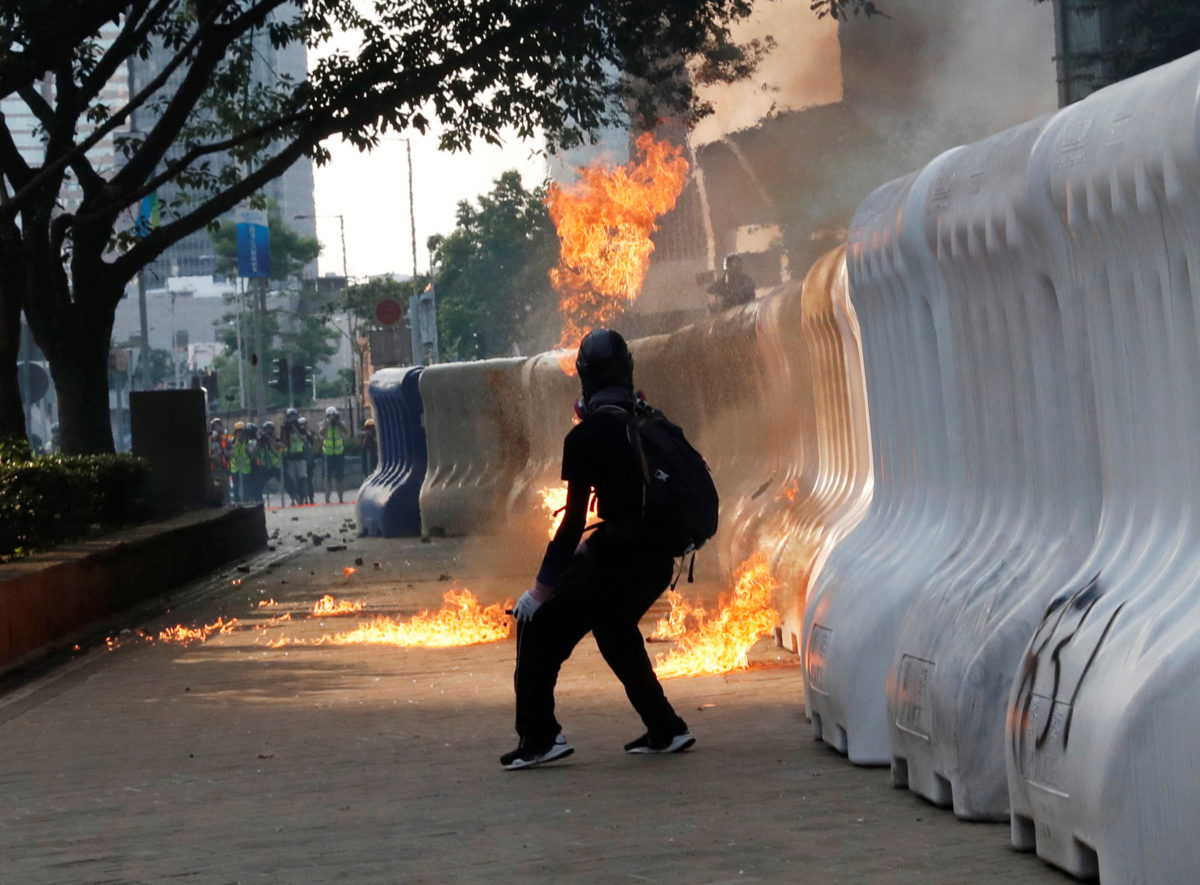 An anti-government protester reacts near a burning fence during a demonstration near Central Government Complex in Hong Kong, China, September 15, 2019. Photo by Tyrone Siu/Reuters.

The protests were triggered in June by an extradition bill that many saw as an example of China’s increasing intrusion and at chipping away at Hong Kong residents’ freedoms and rights, many of which are not accorded to people in mainland China.

Hong Kong’s government promised this month to withdraw the bill, which would have allowed some criminal suspects to be sent to mainland China for trial, but protesters have widened their demands to include direct elections for the city’s leaders and police accountability.

More than 1,300 people have been arrested amid increasing clashes between protesters and police, who demonstrators have accused of abuses.

The unrest has battered Hong Kong’s economy, which was already reeling from the U.S.-China trade war. It is also seen as an embarrassment to Beijing, which has accused foreign powers of fomenting the unrest.

Earlier Sunday, hundreds of protesters waved British flags, sang “God Save the Queen” and chanted “UK save Hong Kong” outside the British Consulate as they stepped up calls for international support for their campaign.

With banners declaring “one country, two systems is dead,” they repeated calls for Hong Kong’s former colonial ruler to ensure the city’s autonomy is upheld under agreements made when Britain ceded power to China in 1997.

Demonstrators held similar rallies Sept. 1 at the British Consulate and last weekend at the U.S. Consulate.

On Saturday, pro-democracy protesters and supporters of the central government in Beijing clashed at a Hong Kong shopping mall and several public places. Police arrested more than a dozen people and hospital authorities said 25 were injured.

The clashes amid the mid-autumn festival holiday came after several nights of peaceful rallies that featured protesters belting out a new protest song in mass singing at shopping malls. Thousands of people also carried lanterns with pro-democracy messages in public areas and formed illuminated human chains on two of the city’s peaks on Friday night to mark the major Chinese festival.

Left: An anti-government protester is sprayed with water cannon by the police during a demonstration near Central Government Complex in Hong Kong, China September 15, 2019. Photo by Tyrone Siu/Reuters.