What are economic sanctions?

For many foreign policymakers, economic sanctions have become the tool of choice to respond to major geopolitical challenges, from counterterrorism to conflict resolution.

Governments and multinational bodies impose economic sanctions to try to alter the strategic decisions of state and nonstate actors that threaten their interests or violate international norms of behavior. Critics say sanctions are often poorly conceived and rarely successful in changing a target’s conduct, while supporters contend they have become more effective in recent years and remain an essential foreign policy tool. Sanctions have become the defining feature of the Western response to several geopolitical challenges, including North Korea’s nuclear program and Russia’s intervention in Ukraine.

What are economic sanctions?

Economic sanctions are defined as the withdrawal of customary trade and financial relations for foreign and security policy purposes. They may be comprehensive, prohibiting commercial activity with regard to an entire country, like the long-standing U.S. embargo of Cuba, or they may be targeted, blocking transactions of and with particular businesses, groups, or individuals.

Since 9/11, there has been a pronounced shift toward targeted or so-called “smart” sanctions, which aim to minimize the suffering of innocent civilians. Sanctions take a variety of forms, including travel bans, asset freezes, arms embargoes, capital restraints, foreign aid reductions, and trade restrictions. (General export controls, which are not punitive, are often excluded from sanctions discussions.)

When are sanctions used?

National governments and international bodies like the United Nations and European Union have imposed economic sanctions to coerce, deter, punish, or shame entities that endanger their interests or violate international norms of behavior. They have been used to advance a range of foreign policy goals, including counterterrorism, counternarcotics, nonproliferation, democracy and human rights promotion, conflict resolution, and cybersecurity.

Sanctions, while a form of intervention, are generally viewed as a lower-cost, lower-risk, middle course of action between diplomacy and war. Policymakers may consider sanctions a response to foreign crises in which the national interest is less than vital or where military action is not feasible. Leaders can on occasion issue sanctions while they evaluate more punitive action. For example, the UN Security Council imposed comprehensive sanctions against Iraq just four days after Saddam Hussein’s invasion of Kuwait in August 1990. The Council did not authorize the use of military force until months later.

What is the sanctions process at the UN?

As the UN’s principal crisis-management body, the Security Council may respond to global threats by cutting economic ties with state and nonstate groups. Sanctions resolutions must pass the 15-member Council by a majority vote and without a veto from any of the five permanent members: the United States, China, France, Russia and the United Kingdom. The most common types of UN sanctions, which are binding on all member states, are asset freezes, travel bans and arms embargoes.

UN sanctions regimes are typically managed by a special committee and a monitoring group. The global police agency Interpol assists some sanctions committees, particularly those concerning al-Qaida and the Taliban, but the UN has no independent means of enforcement and relies on member states, many of which have limited resources and little political incentive. Anecdotal evidence suggests that enforcement is often weak.

Prior to 1990, the Council imposed sanctions against just two states: Southern Rhodesia (1966) and South Africa (1977). However, since the end of the Cold War, the body has used sanctions more than twenty times, most often targeting parties to an intrastate conflict, as in Somalia, Liberia, and Yugoslavia in the 1990s. But despite this cooperation, sanctions are often divisive, reflecting the competing interests of world powers. For instance, since 2011, Russia and China have vetoed several Security Council resolutions concerning the conflict in Syria, some of which could have led to sanctions against President Bashar al-Assad’s regime. 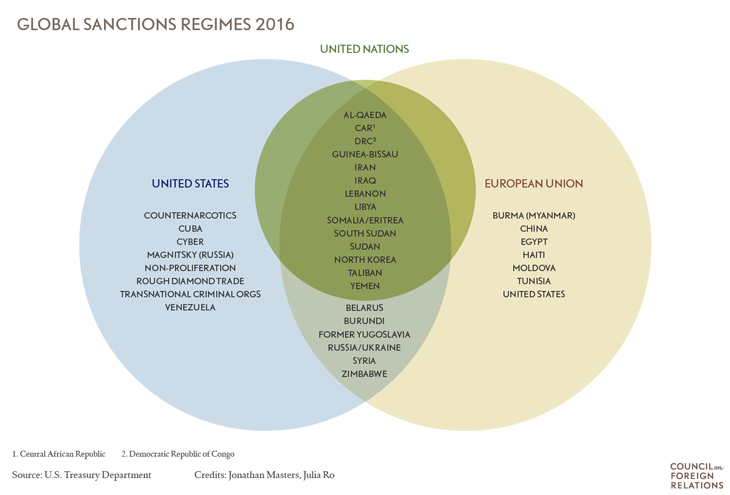 What is the sanctions process in the EU?

The European Union imposes sanctions (known more commonly in the 28-member bloc as restrictive measures) as part of its Common Foreign and Security Policy. Because the EU lacks a joint military force, many European leaders consider sanctions the bloc’s most powerful foreign policy tool. Sanctions policies must receive unanimous consent from member states in the Council of the European Union, the body that represents EU leaders.

Since its inception in 1992, the EU has levied sanctions more than thirty times (in addition to those mandated by the UN). Analysts say the comprehensive sanctions imposed on Iran in 2012 marked a turning point for the bloc, which had previously sought to limit sanctions to specific individuals or companies. Individual states may impose harsher sanctions independently within their national jurisdiction.

What is the sanctions process in the United States?

The United States uses economic and financial sanctions more than any other country. Sanctions policy may originate in either the executive or legislative branches. Presidents typically launch the process by issuing an executive order (EO) that declares a national emergency in response to an “unusual and extraordinary” foreign threat, such as “the proliferation of nuclear, biological, and chemical weapons” (EO 12938) or “the actions and policies of the Government of the Russian Federation with respect to Ukraine” (EO 13661). This affords the president special powers (pursuant to the International Emergency Economic Powers Act) to regulate commerce with regard to that threat for a period of one year, unless extended by him/her or terminated by a joint resolution of Congress. (Executive orders may also modify sanctions.)

Notably, most of the more than fifty states of emergency declared since Congress placed limits on their duration in 1976 remain in effect today, including the first, ordered by President Jimmy Carter in 1979 with respect to Iran.

Congress, for its part, may pass legislation imposing new sanctions or modifying existing ones, which it has done in many cases. In instances where there are multiple legal authorities, as with Cuba and Iran, congressional and executive action may be required to alter or lift the restrictions. In July 2017, Congress passed and President Donald Trump reluctantly signed a bill adding to the list of sanctions on Russia, Iran, and North Korea. The bill is noteworthy in that it requires the president to justify to the legislature any termination of the sanctions.

For the most part, the twenty-six existing U.S. sanctions programs are administered by the Treasury Department’s Office of Foreign Assets Control (OFAC), while other departments, including State, Commerce, Homeland Security, and Justice, may also play an integral role. For instance, the secretary of state can designate a group a Foreign Terrorist Organization, or label a country a State Sponsor of Terrorism, both of which have sanctions implications. (Travel bans are handled by the State Department as well.) State and local authorities, particularly in New York, may also contribute to enforcement efforts.

In 2017, the United States had comprehensive sanctions regimes on Cuba, Iran, Sudan, and Syria, as well as more than a dozen other programs targeting individuals and entities pertaining to certain political crises or suspected of certain types of criminal behavior, such as narcotics trafficking. OFAC routinely adds (or deletes) entries on its blacklist of more than six thousand individuals, businesses, and groups (known as Specially Designated Nationals.) The assets of those listed are blocked, and U.S. persons, including U.S. businesses and their foreign branches, are forbidden from transacting with them. 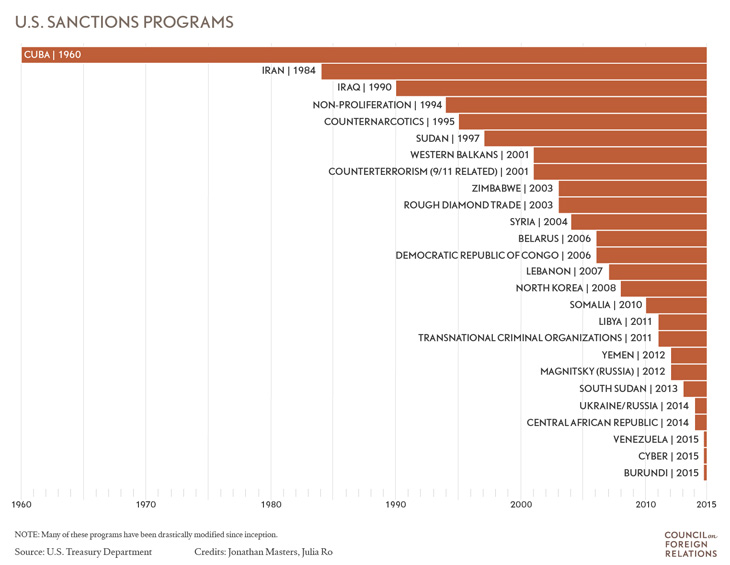 In concert with its allies, the U.S. government launched an all-out effort to disrupt the financial infrastructure supporting terrorists and international criminals. This campaign focused on the gateways of the global financial system—international banks—and relied on a handful of new authorities granted to U.S. agents in the days after the attacks.

On Sept. 23, President George W. Bush signed EO 13224that provided Treasury Department officials with far-reaching authority to freeze the assets and financial transactions of individuals and other entities suspected of supporting terrorism. Weeks later, Bush gave the Treasury broad powers (under Section 311 of the USA Patriot Act) to designate foreign jurisdictions and financial institutions as “primary money laundering concerns.” (Notably, Treasury needs only a reasonable suspicion — not necessarily any evidence — to target entities under these laws.)

Experts say that these measures fundamentally reshaped the financial regulatory environment, greatly raising the risks for banks and other institutions engaged in suspicious activity, even unwittingly. The centrality of New York and the dollar to the global financial system mean these U.S. policies are felt globally.

Penalties for sanctions violations can be huge in terms of fines, loss of business, and reputational damage. Federal and state authorities have been particularly rigorous in prosecuting banks in recent years, settling at least fifteen cases with fines over $100 million since 2009. In a record settlement, France’s largest lender, BNP Paribas, pleaded guilty in 2014 to processing billions of dollars for blacklisted Cuban, Iranian, and Sudanese entities. The bank was fined nearly $9 billion—by far the largest such penalty in history — and lost the right to convert foreign currency into dollars for certain types of transactions for one year. 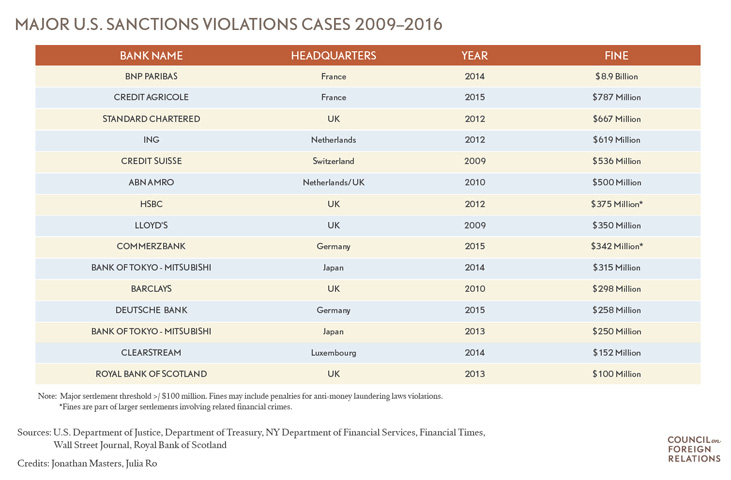 Similarly, those tainted by a U.S. money-laundering designation may suffer crippling losses. In September 2005, Treasury officials labeled Banco Delta Asia a primary money laundering concern, alleging that the Macau-based bank was a “willing pawn for the North Korean government.” Within a week, customers withdrew $133 million, or 34 percent of BDA’s deposits. The financial shock rippled across the globe, inducing other international banks to sever ties with Pyongyang.

“This new approach worked by focusing squarely on the behavior of financial institutions rather than on the classic sanctions framework of the past,” wrote Juan Zarate, a top Bush administration official involved in counterterrorism efforts, in his book Treasury’s War (2013). “In this new approach, the policy decisions of government are not nearly as persuasive as the risk-based compliance calculus of financial institutions.”

What are extraterritorial sanctions?

Traditionally, sanctions prohibit only a home country’s or region’s corporations and citizens from doing business with a blacklisted entity. (Unlike UN sanctions, which are global by nature.) However, extraterritorial sanctions (sometimes called secondary sanctions or a secondary boycott) are designed to restrict the economic activity of governments, businesses, and nationals of third countries. As a result, many governments consider these sanctions a violation of their sovereignty and international law.

In recent years, the reach of U.S. sanctions continued to draw the ire of some close allies. France’s leadership criticized the U.S. prosecution of BNP Paribas as “unfair” and indicated there would be “negative consequences” on bilateral as well as U.S.-EU relations. “The extraterritoriality of American standards, linked to the use of the dollar, should drive Europe to mobilize itself to advance the use of the euro as a currency for international trade,” said French Finance Minister Michel Sapin.

Many scholars and practitioners say that sanctions, particularly targeted sanctions, can be at least partly successful and should remain in the tool kits of foreign policymakers. Evaluations of sanctions should consider the following:

This backgrounder first appeared on Aug. 7 on the Council on Foreign Relations’ website.