What happens when migrant children are deported home

Migrant children fleeing violence and poverty in their home countries are even more vulnerable if they’re deported back once they arrive in the U.S. and Mexico, in part because they return to worse conditions than those that prompted them to leave in the first place, the U.N.’s agency for children said in a report released today.

“I think a lot of people don’t understand how much worse it can actually be for people when they are pushed back” to their home countries, said Christopher Tidey, a communication specialist for the United Nations Children’s Fund (UNICEF) and a lead author on this latest report. “It’s not just as simple as going home,” he added.

The UNICEF report said the children decide to make the journey north to Mexico and the U.S. from northern Central America — specifically, El Salvador, Guatemala and Honduras, where gangs have virtually taken over as the local authority. Their daily lives are marked by poverty and a lack of social services.

“It’s not just as simple as going home.”

These same conditions are intensified and new problems can develop once the U.S. and Mexico decides to deport them, UNICEF said in its report, which includes summaries of interviews it conducted with migrant families.

That migrant children could face worsened conditions upon their forced return isn’t a new idea. But it’s one that could be neglected when it comes to coverage of the region or policy proposals in dealing with the crisis, Tidey told the PBS NewsHour.

Here’s a closer look at the agency’s findings:

Who’s affected, and why do they leave?

Between January and June of this year, UNICEF said more than 96,000 migrants, including more than 24,000 women and children, returned to their home countries after being deported from Mexico and the U.S. And that number appears to be growing, aided in part by the increased cooperation between Mexico and the U.S. under the Southern Border Plan, launched in 2014 to strengthen border security and apprehensions along Mexico’s border with Guatemala.

The majority of migrant children are being pushed back to their home countries from Mexico, in part because of the Southern Border Plan, Tidey said.

What conditions do migrant children face when they’re forced to return to their home countries?

There are emotional scars, too

A Honduran teenager, identified in the UNICEF report as Eric, recounted how he and his mother attempted to reach the U.S. about nine years ago, hoping for better living conditions. Along the way, they were stopped at a police roadblock, where he was held at gunpoint. He and his mother were detained together in a jail for four months before they were finally deported back to Honduras.

They were penniless, said Eric, 18; they sold all of their belongings to help pay for their initial trip. Eric’s mother eventually left Honduras again to look for work, leaving the teen to look after his younger sister.

Eric told UNICEF he’s had psychological problems from the stress of the situation, describing himself as “aloof.” “Those problems made me a lonely boy because I had to think like a grown-up,” he added. 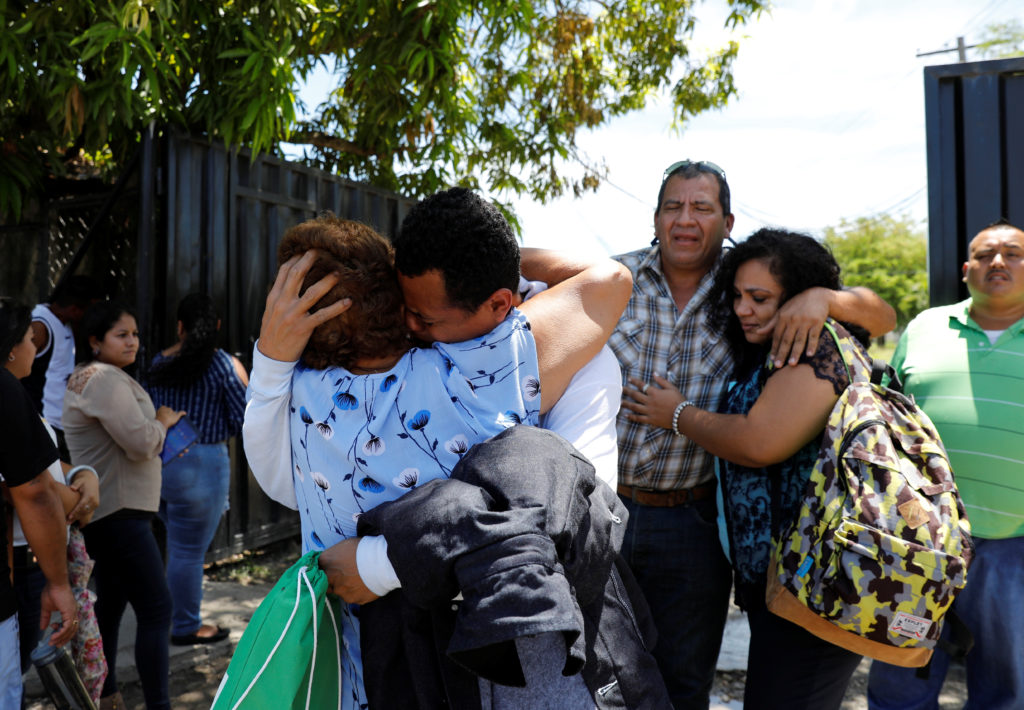 A Honduras deportee from the U.S., embraces a relative as he arrives with others, outside the Migrant Center San Pedro Sula, Honduras, in June. Photo by Carlos Jasso/Reuters

UNICEF’s report said the detention or separation of migrant families by immigration forces are “deeply traumatizing experiences” that can affect a child’s development in the long run.

Dr. Colleen Kraft, president of the American Academy of Pediatrics, said “the relationship with a loving parent or primary caregiver is critical to a child’s sense of self and safety.” The younger the child, the more critical this is, she said.

When a young girl named Sofi and her grandmother came legally to a U.S. immigration checkpoint, they tried to apply for asylum but were separated by U.S. officials. After 47 days, their story took a happier turn last week in California. Amna Nawaz joins William Brangham to share an update.

“Even with older children, separation from parents or primary caregivers is one of the most potent traumatic stressors that a child can experience, especially if this happens under frightening or sudden or chaotic or prolonged circumstances,” Kraft said.

These type of separations, regardless of where they occur along the children’s journey, can increase the child’s risk for developing depression, anxiety, post-traumatic stress symptoms or other traumatic reactions, she added.

What needs to be done?

Among other calls for action in its report, UNICEF said there needs to be investments from Mexico, the U.S. and other governments into the economies of these affected countries. That also includes investing in education and having systems in place so that migrant children are not compelled to uproot and journey north or move elsewhere within the region.

UNICEF also called for alternatives to the detention of migrant families by Mexican and U.S. officials and an end to the practice in both countries.