What’s being done to help the Rohingya?

Updated on Nov. 24: Bangladesh and Myanmar have signed a deal to return hundreds of thousands of Rohingya, who fled Myanmar because of violence, within two months. Officials said they are working out the details, but aid agencies expressed concern about forcibly returning the minority group.

It’s been nearly three months since a fresh outbreak of violence in Myanmar’s Rakhine state caused the Rohingya to begin fleeing to Bangladesh.

Since then, more than 600,000 members of the Rohingya, a majority-Muslim ethnic group who have lived in Myanmar for centuries, have left the country. There has since been growing pressure on Myanmar’s state counsellor Aung Sun Suu Kyi to take concrete actions to address the crisis, including a visit from U.S. Secretary of State Rex Tillerson.

Tillerson said Wednesday that the situation in the northern Rakhine state “constitutes ethnic cleansing against the Rohingya.” In a statement, Tillerson cited the military, security forces and local vigilantes as the main perpetrators causing “tremendous suffering” and forcing hundreds of thousands to seek refuge in Bangladesh. He added that the U.S. will consider taking action through targeted sanctions.

We asked experts take a look at what’s being done to address the situation now, and what’s next.

More than 600,000 Rohingya refugees have fled into neighboring Bangladesh since Aug. 25, when the Myanmar military retaliated against Rohingya insurgent attacks on police stations by attacking Rohingya villages.

The Rohingya are not recognized by the Myanmar government as one of the country’s 135 ethnic groups.

In refugee camps in Bangladesh, the Rohingya face harsh living conditions, living in makeshift shelters or under plastic sheeting with no basic services – including latrines and water pumps to access clean water.

“Despite these traumatic experiences and Burma’s denial of their citizenship, many Rohingya expressed a strong desire to return to their homes in Burma – provided their safety, security, and rights could be guaranteed,” the State Department’s Simon Henshaw told the Newshour. He recently returned from a trip to Myanmar and Bangladesh.

What is Myanmar doing? 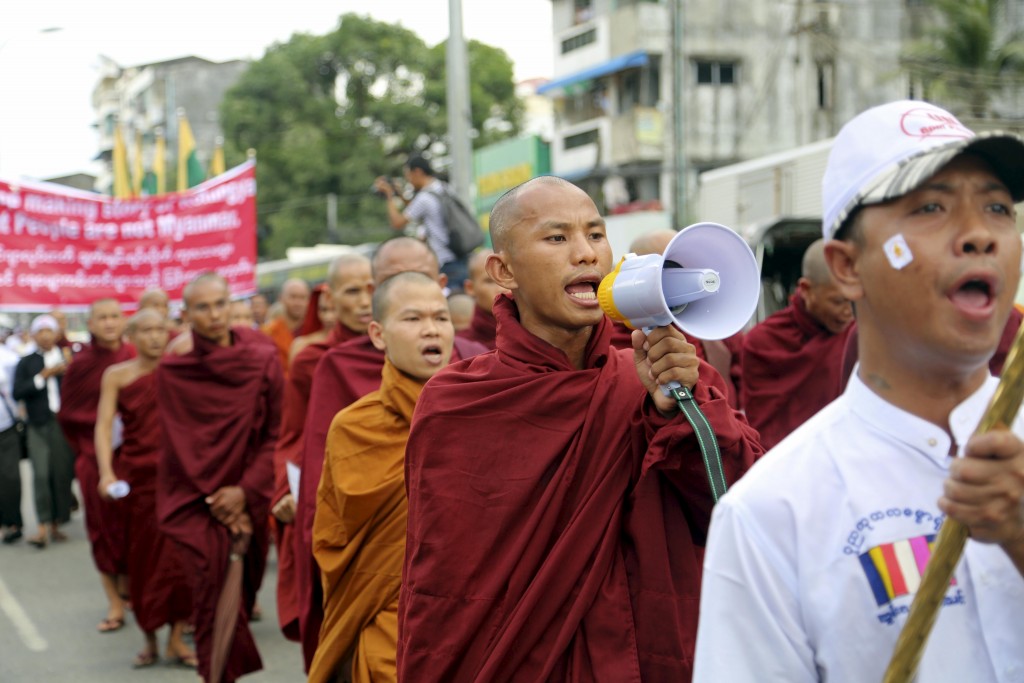 Monks and protesters shout during a march to denounce foreign criticism of the country’s treatment of stateless Rohingya Muslims, in Yangon, Myanmar May 27, 2015. Photo by Aubrey Belford/Reuters

In early October, Aung Sang Suu Kyi formed the Union Enterprise for Humanitarian Assistance, Resettlement, and Development of Rakhine State (UEHRD) with three goals: aid for refugees in Bangladesh, the eventual resettlement of refugees in Bangladesh back to Myanmar, and development of the neglected Rakhine state where Rohingya have historically lived.

“Rather than rebutting criticism and allegations with words, we will show the world by our actions and our deeds,” Aung Sang Suu Kyi said in a national speech on Oct. 13.

Private and public entities fund the organization, and the Myanmar government is appealing to business and civil society for more money to implement its recommendations.

“Rather than rebutting criticism and allegations with words, we will show the world by our actions and our deeds.” – Aung Sang Suu Kyi

“It serves as a vehicle for demonstrating that the country’s population is not dominated by the racist, anti-Muslim nationalists whose voices are often cited by international media to characterize the entire Myanmar Buddhist population,” said Priscilla Clapp, former chief of mission to the U.S. Embassy in Myanmar.

But it has come under criticism from the human rights community for not doing enough to address the root issues of the crisis.

“More than half of the Rohingya population has been ethnically cleansed from the country, so who are they developing Rakhine State for and how will they provide those who return with a path to citizenship or even assure them, in light of zero accountability, that the same military that attacked them will not do so again?” he added.

At the joint press conference with Tillerson on Wednesday, Aung Sang Suu Kyi presented the UEHRD as a national effort to garner public support, stating it is “something that belongs to our people” and it “is the duty of each and every citizen of this country.”

What power does Aung Sang Suu Kyi actually have? 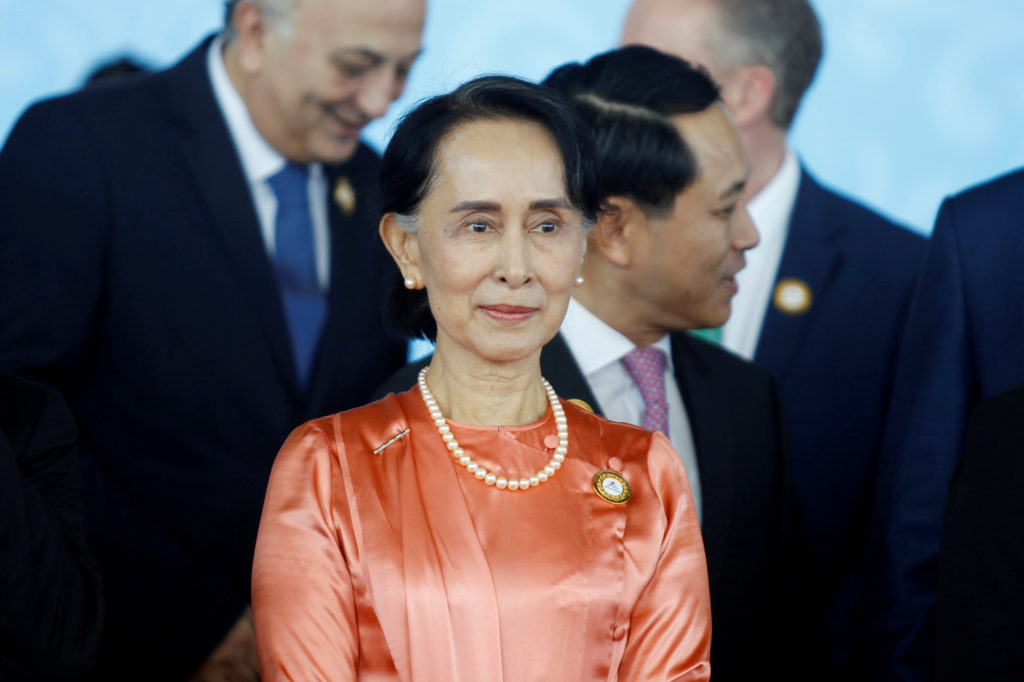 The real problem, according to Russel: Aung Sang Suu Kyi’s National League for Democracy party won 80 percent of parliament votes in a 2015 election to form the country’s first civilian-led government in more than 50 years. But the 2008 constitution does not give Aung Sang Suu Kyi any authority over the military, and there must be international collaboration to insure there is civilian authority over the armed forces, Russel added.

“She is doing her best not to upset the delicate political balance in a country where the military has almost full reign,” Russel said.

Security forces in Myanmar will present the greatest obstacle to the repatriation and resettlement, Clapp added. Their focus on the “terrorist” threat within the Rohingya population will complicate the repatriation process and make it difficult to provide security for refugees to return.

“Most importantly, the military, through its control of the ministries of defense, border affairs, and home affairs, continues to dominate government administration at the local level,” Clapp said.

What the international community says

Aung Sang Suu Kyi has faced widespread criticism for her handling of the Rohingya crisis.

Mark Farmaner, director of Burma Campaign UK said in a testimony to a UK parliamentary committee that while “on several issues she’s part of the problem … a lot of the international community would also say she’s the best hope and part of the possible solution.”

“The biggest tragedy here is she is the one person in the country who really could change attitudes towards the Rohingya. She’s chosen not to do that,” he added during the committee hearing, which also included testimony from other human rights groups.

“She has kept political prisoners in jail. Although she hasn’t the power to stop their arrests, she has the power to release them … It is something we are going to have to come to terms with, as well as the fact that we have the military controlling part of the government.

Aung Sang Suu Kyi has rejected a U.N. Fact-Finding Mission, launched last year by the U.N. Human Rights Council, saying in May that she did not agree with it. Her deputy minister of foreign affairs has also instructed Myanmar embassies not to grant visas to members of the fact-finding mission. The United Nations has gained access to Bangladesh, where they interviewed newly arrived Rohingya crossing the border from Myanmar. They plan to release a report, whether or not they gain entry to Myanmar, in early 2018.

“If Suu Kyi is committed to safe returns and development as she claims, why is she not doing all that she can to allow unfettered access for international humanitarian aid and the U.N. fact-finding mission?” Sullivan said.

What the U.S. says 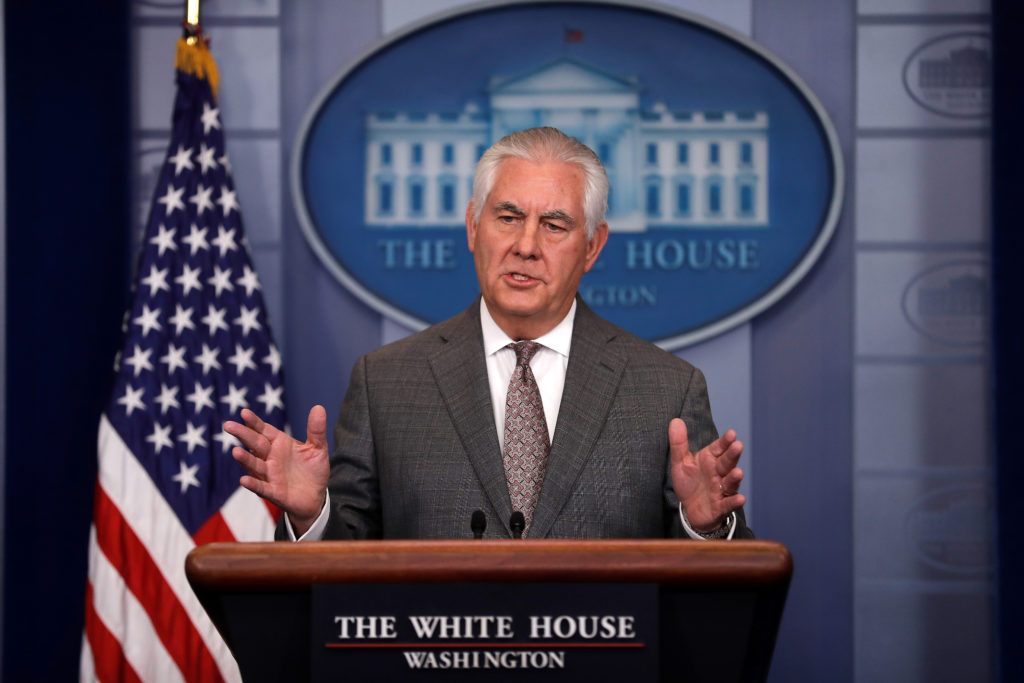 Secretary of State Rex Tillerson answers questions during the daily briefing at the White House on Nov. 20. Photo by Carlos Barria/Reuters

Since August, the United States has given a total of $87 million dollars in humanitarian assistance in response to the crisis in Myanmar and Bangladesh.

Speaking at a joint press conference with Aung Sun Suu Kyi last Wednesday, Tillerson added that broad-based economic sanctions against the country are not a solution but that he would consider more sanctions against individuals found to be responsible for the violence.

Total U.S. humanitarian assistance for displaced people in and from Burma has reached $151 million since October 2016.

At the joint press conference, Tillerson did not mention the UEHRD program by name, but did say he welcomes the government’s efforts to create the conditions necessary for refugees to return to their homes and uphold the recommendations of the Advisory Commission on Rakhine State.

The State Department is not providing monetary assistance to the UEHRD, Henshaw said. 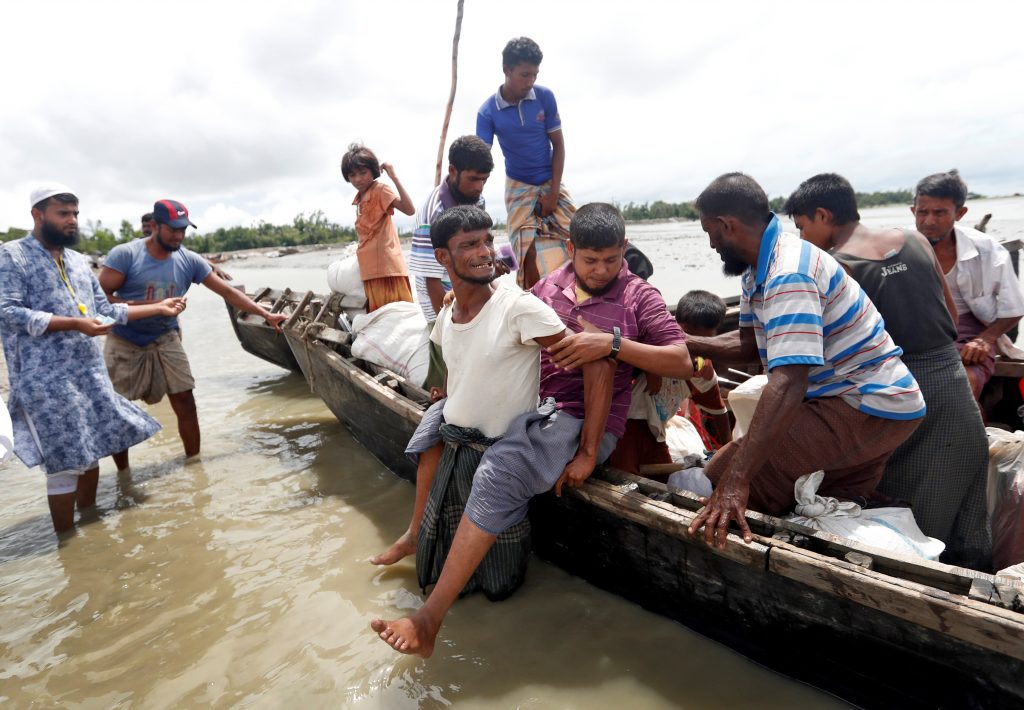 Rohingya refugees are seen in a boat after their arrival at Cox’s Bazar, Bangladesh on Sept. 18. Photo by Cathal McNaughton/Reuters

Sullivan said there are a range of actions Tillerson can take to back up his words, including targeted sanctions against senior military leaders responsible for atrocities and the appointment of a high-level U.S. special representative to coordinate a strong U.S. policy response.

Some believe that senior U.N. officials involved in humanitarian aid are hesitant to criticize Aung Sang Suu Kyii, fearing that it would risk efforts to guide the country through a political transition from military rule to democracy and destabilize the U.N.’s relief efforts in the country.

Clapp said she thinks Aung Sang Suu Kyi needs more support from the international community in the face of a military and security force which does not support her efforts.

“I think we’ve lost sight of the plight of the Rohingya, and we need to think of a long-term solution and that’s what [ Aung Sang Suu Kyi] is offering. The international community should be supporting her and not trying to undercut her,” Clapp said.

Left: A steady stream of Rohingya refugees cross into Bangladesh. The United Nations estimates 600,000 have entered since August. Photo by Mohammad Ponir Hossain/Reuters