What’s the difference between genocide and ethnic cleansing?

World leaders have chosen their words carefully when describing the mass exodus of Rohingya fleeing violence in Myanmar, so far largely avoiding the legally specific and politically charged term “genocide.”

The actions the Myanmar military is taking against the Muslim minority group have been called  a  “complicated situation,” a “brutal crackdown,” and a “textbook case of ethnic cleansing.”

On Tuesday, a U.S. state department official said the U.S. is considering new targeted sanctions against Myanmar but declined to label the violence ethnic cleaning.

Spokeswoman Heather Nauret said in a statement that the U.S. is restricting all assistance programs for those involved in the violence, halting travel waivers for senior Myanmar military leaders, and may use a human rights law to target specific groups or officials.

The Associated Press reports that U.S. officials are preparing a recommendation for Secretary of State Rex Tillerson to declare that ethnic cleansing is taking place in Myanmar, but the State Department declined to comment.

What does ‘genocide’ technically mean?

The United Nations first defined genocide in 1948 in the Convention on the Prevention and Punishment of the Crime of Genocide. The treaty outlines five acts that can constitute genocide if they are done “with the intent to destroy an ethnic, national, racial or religious group”:

1. Killing members of the group

3. Deliberately inflicting conditions of life calculated to bring about the group’s physical destruction in whole or in part

To qualify as genocide, the actions must be done with intent to eliminate an entire group of people. Without provable intent, a group or individual can still be guilty of “crimes against humanity” or “ethnic cleansing” but not genocide.

Tribunals have historically struggled to establish a legal standard for genocidal intent. Few perpetrators, with the notable exception of the Nazi regime, have left explicit plans detailing their intentions to eradicate groups. 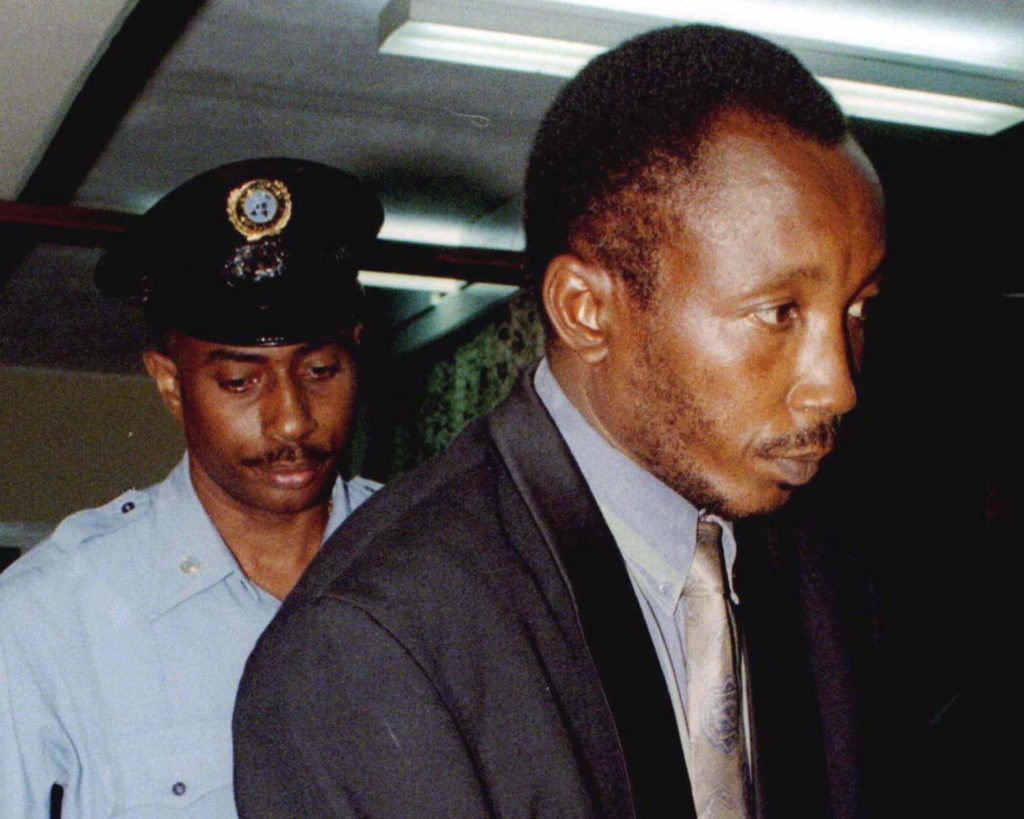 The first person found guilty of genocide was the former mayor of Rwanda’s Taba commune in 1998. The International Genocide Tribunal on Rwanda found Jean-Paul Akayesu guilty because “he knew or should have known that the act committed would destroy, in whole or in part, a group.”

What is ethnic cleansing?

Ethnic cleansing, on the other hand, only refers to the expulsion of a group from a certain area.

Ethnic cleansing has not been defined and is not recognized as a crime under international law, according to the U.N. And in reality, the lines between ethnic cleansing and genocide are often blurred.

“Your motivation may be that you want the people out, but if in doing that you intend to destroy the group, then it’s also genocide,” said James Silk, a human rights professor at Yale Law School.

“International law lacks enforcement mechanisms, it demands buy in from an international community. Clearly it hasn’t been effective.”

More than 500,000 Rohingya refugees, escaping violence and persecution in Myanmar, have fled their homes in the last two months.

Rohingya refugees made their way across the border to Bangladesh in earlier spouts of violence in the 1970s and 1990s and again in October 2016. The latest wave of refugees occurred after Aug. 25, when Rohingya insurgents staged an attack on several police posts and an army base in the Rakhine state.

The Myanmar military retaliated against Rohingya villages in the Rakhine state, with accounts documenting villages burned, women and girls raped, and hundreds of Rohingya killed.

A U.N. report from September details the Myanmar government forces conducting a “well-coordinated, organized and systematic campaign of human rights violations” against the Rohingya ethnic minority, and the “forced displacement of large sections of the Rohingya population” from their villages.

What is the punishment for genocide?

The U.N. treaty addressing genocide states that any person or group committing the crime “shall be punished, whether they are constitutionally responsible rulers, public officials or private individuals.”

But the treaty does not dictate the outcome of a genocide conviction. Past sentences have ranged from 10 months to life in prison, depending on the person’s role in the crime.

If national courts in countries that have signed the treaty fail to prosecute individuals, the International Criminal Court in The Hague is supposed to step in.

But the International Criminal Court has no authority to arrest on its own and must rely on the cooperation of individual nations to enforce punishment.

Using the term genocide also has political implications. On April 28, 1994, a reporter asked U.S. State Department spokeswoman Christine Shelley whether the events in Rwanda could be considered a genocide.

Earlier that month, the Rwandan Armed Forces and Hutu militia had begun a violent and deliberate campaign to kill Tutsi and moderate Hutu politicians. Thousands of people were killed on the first day.

But Shelley stopped short of calling the situation in Rwanda a genocide. She responded by saying the United States needed more evidence to determine whether the situation met the U.N. definition.

At the time, Molly Williamson, the deputy assistant secretary of defense for Middle East/Africa, also warned against using the term genocide to describe the events in Rwanda, because, according to a Defense Department discussion paper, a “genocide finding could commit [the U.S.] to actually ‘do something.'”

When it comes to Myanmar, many of the same concerns apply.

In October 2016, former President Barack Obama issued an executive order to lift economic sanctions on Myanmar after what his administration said were positive steps in addressing human rights abuses in the country following the election of activist and Nobel Prize winner Aung San Suu Kyi’s party.

“I have determined that the situation that gave rise to the national emergency with respect to Burma has been significantly altered by Burma’s substantial advances to promote democracy, including historic elections in November 2015,” Obama wrote in an October 2016 letter to Congress.

Silk said the Obama administration avoided using the word genocide in part because that would undermine a “hopeful democracy and its leader, and there is general hesitation on the part of powerful states to use the word genocide and trigger legal and moral obligations.”

Joshua Kurlantzick, a senior fellow for Southeast Asia at the Council on Foreign Relations, said the United States is unlikely to call the situation in Myanmar a genocide before other experts or the U.N. says it first. 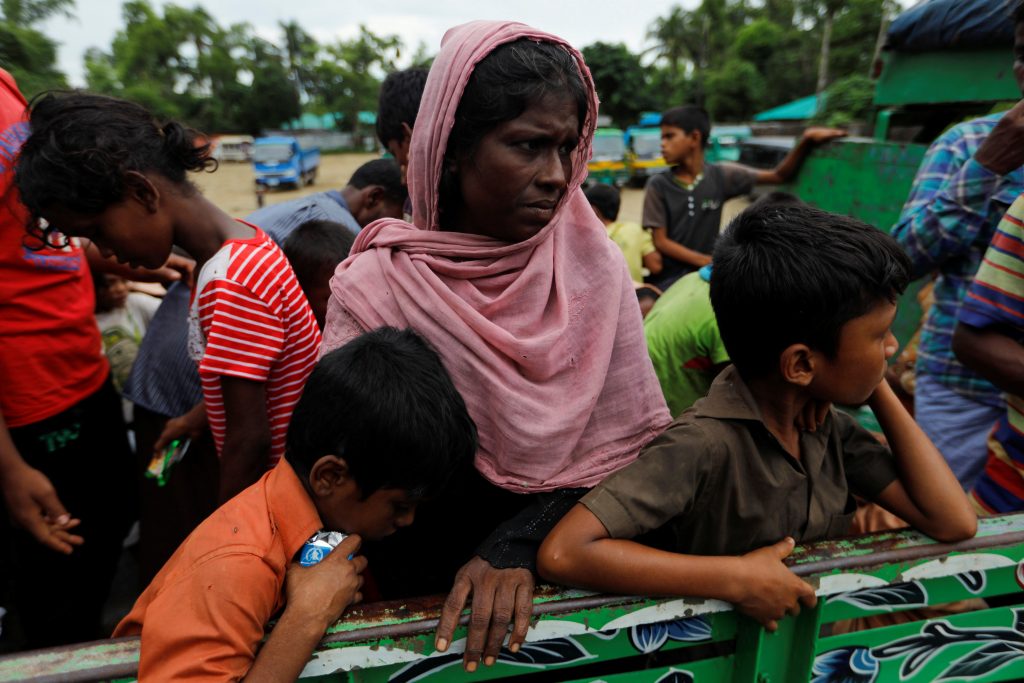 Rohingya refugees ride on the back of the truck to a camp near Teknaf , Bangladesh, on Oct. 12. Photo by Jorge Silva/Reuters

Senior U.N. officials appear to be hesitant to criticize Suu Kyi, fearing that it would risk efforts to guide the country through a political transition from military rule to democracy and destabilize the U.N.’s relief efforts in the country.

In the case of the Rwandan genocide, more than 20 years later, many of the perpetrators have been brought to justice in Rwandan courts or domestic courts in Europe and North America. But this is the result of an intentional effort by the Rwandan government.

Unilaterally, Kurlantzick said there is limited opportunity for the United States to change the situation in Myanmar.

“They could push for more aid or for the United Nations to have access to the Rakhine state, but they can’t impose U.N. Security Council sanctions because there are countries within the council that don’t support that,” he said.

Declaring the violence a genocide would force the international community’s hand, Silk said. Once a genocide is declared, he added, doing nothing is no longer an option.

The international community’s responsibility under international law does not change based on whether a situation is determined a crime against humanity or a genocide, said Tasnim Motala, a lawyer and co-author of a paper by the Lowenstein International Human Rights Clinic at Yale Law School, which found a “strong foundation from which to infer genocidal intent by security forces, government officials, local Rakhine, and others.”

The Responsibility to Protect doctrine says that if a state is unable to protect its own populations from “genocide, war crimes, ethnic cleansing and crimes against humanity” then the international community must do something.