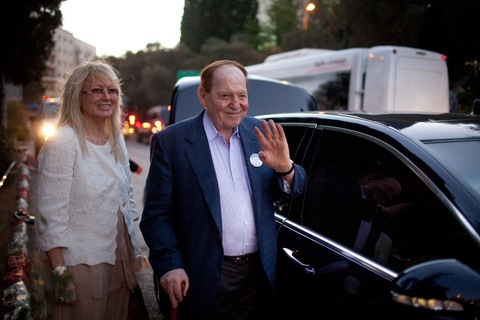 Saying he wanted to bring a “fair and balanced” approach to Israel, in 2007 he launched Israel HaYom (Israel Today), a free daily tabloid that initially only published on weekdays. But soon it was publishing seven days a week and challenging every paper in the Israeli market for readership and ad dollars.

In January, a bi-annual media survey announced that Israel HaYom is the most widely read daily, for the third year running.

The paper, which is run at a loss, has been criticized for aligning itself too closely with Prime Minister Benjamin Netanyahu and his policies. It was reported last year that one of its columnists was actually on the prime minister’s payroll as a speechwriter and consultant.

It also serves as a platform from which Adelson can project his rejection of the two-state solution. A Jan. 2 opinion piece in the paper calls the idea of a peace process “fantasy” and goes on to say that “No one is buying this used up, worn out merchandise, for which many in Israel have already paid a very high price.”

Whatever your opinion of Adelson, it’s unmistakable that Israel HaYom has pushed some of the competition to be as opinionated in their reporting and writing as Israel’s largest daily.

For decades, the liberal daily Yedioth Ahronot held a monopoly on Israeli readership.

According to Oren Persico, a journalist for the non-profit Israeli media watchdog The Seventh Eye, Yedioth Ahronot would muscle kiosk owners who sold the paper to give it prominent placement, among other things.

They were caught flatfooted by Adelson’s paper which, unlike other free metro daily tabloids, had a bit of muscle itself: a large politics section, opinion writing and national news. Israel YaHom also started hiring away top editorial talent from Yedioth Ahronot.

“It wasn’t your usual crime, sex-scandal and sports kind of newspaper,” said Persico.

Israel YaHom is also ubiquitous. It’s available for free on bus benches and newsstands, while hawkers thrust the paper into your arms on train-station platforms. For a time, you could even get the paper delivered right to your door at no cost.

But the paper has a definite point of view, defending Netanyahu not only from the political opposition, but from critics within his own Likud-Beitenu coalition.

It also started undercutting the competition’s ad rates, selling space on its pages for far less than Yedioth Ahronot, radically altering the market.

As a result, Maariv, another formerly powerful paper, is on the verge of collapse and has scrapped its print edition. Late last year Haaretz, the favorite daily read of Israel’s cognoscenti, also had layoffs, which sparked a round of strikes last year. 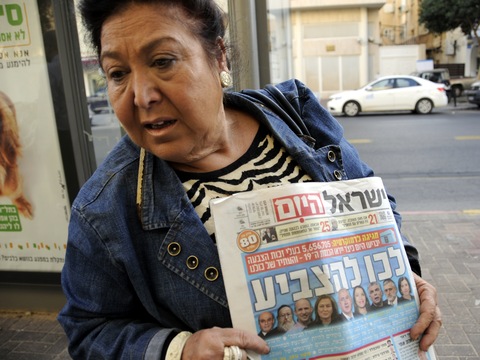 A woman holds a copy of Israel Today on election day. Photo by P.J. Tobia/NewsHour.

Another profound effect Israel HaYom had was to spark an ideological war that had nothing to do with out-scooping each other.

“Israel Today became an extreme supporter of Netanyahu” said Teig. “Yedioth Ahronot became extreme against Netanyahu and in supporting anyone that was against him.”

Readers of both papers can now look forward to less-than-substantive reports and opinion pieces, like this one in Yedioth Ahronot about Benjamin Netanyahu’s wife underpaying the family maid while making her work on Shabbos. Those perusing Israel YaHom can hear all about how Yedioth Ahronot is full of “Stalinist hypocrisy.”

Persico claimed that the actual journalism in Israel HaYom is far worse than the competition.

“It’s really become ludicrous,” he said. “Many times the main headline of the newspaper is just the official Netanyahu daily memo.”

An illustrated example of the paper’s persuasion ran in November of 2011 when it hosted a survey, asking, “In your opinion, would steps implemented by the Western countries prevent Iran from creating a nuclear weapon?” According to the text in the article itself, a majority of survey respondents said “no,” but the chart that accompanied the article clearly made it appear — by way of a long blue bar — that a majority had answered “yes.” A photo of a giant mushroom cloud that accompanied the charticle likely added editorial context, giving readers a front-and-center visual of what nuclear capable Iran might mean. See the post for yourself here.

The day after a video was released with Romney’s campaign blundering “47 percent” comments, the paper’s front page opinion piece accused U.S. President Barack Obama of “voluntarily lowering the profile” of the United States and causing instability in the Arab world. The story about the hidden camera video that led news websites and cable news shows in the U.S. was on page 23 of that day’s paper.

A spokesman for Israel YaHom declined our request to be interviewed for this story, but Teig thinks that the paper adds an important diversity of notes to an industry that had become monotone.

And the paper does have many defenders.

Last year, Ronn Torossian, a successful U.S.-based entrepreneur, wrote in the Jerusalem Post that “Adelson is encouraging more competition, and liberals can complain, but Israel HaYom will continue succeeding.”

Torossian argued that “In free markets, readers are free to choose, and business people are free to invest as they see fit.”

All true. And by that measure, Sheldon Adelson and Israel HaYom are winning big.

View all of the NewsHour team’s reports from Israel, West Bank and Gaza, and follow us on Twitter: