Who is ‘the opposition’ in Syria after 8 years of war?

The Assad regime agreed to a cease-fire in Syria’s rebel-held Idlib province on Thursday, following a violent week of regime-aligned airstrikes carried out by Russia that killed more than 103 Syrian civilians there, including 26 children. The uptick in carnage was part of a longer regime campaign against the province, which is the last opposition stronghold in Syria’s northwest. Idlib, hosting a bulk of Syria’s internally displaced citizens, has come to represent the Syrian struggle writ large among opposition forces and the government alike.

But life in an “opposition stronghold” can mean many different things. The northeast, also under the control of opposition factions, has largely avoided the regime’s bombardment due in part to the presence of a Kurdish and U.S. coalition force that remain after fighting the Islamic State.

Disparities in how the regime treats the two regions is just one symptom of a complex, factioned web of opposition forces in Syria. Eight years since anti-regime protests erupted in the streets of Daraa, Syria’s many “oppositions” continue to grapple with distinct internal rifts and the effects of an increasingly tense global landscape.

Here’s a guide to the most prominent of those many factions, and the unique battles they are facing.

Who is in Idlib province?

Idlib is the last-standing insurgent opposition stronghold in western Syria. The Free Syrian Army (FSA), a loose conglomeration of armed brigades formed by Syrian army defectors and anti-regime civilians back in 2011, is a particularly important regional coalition.

But today’s FSA bears relatively little resemblance to the FSA of 2011, due in part to Turkish entrenchment in the northwest. Turkey has invested in the training of groups incorporated into the FSA, as well as providing weapons, which has been critical for the coalition.

“Idlib represents all of Syria. The Assad regime cannot declare victory without it.”

Steven Heydemann, a nonresident senior fellow at the Brookings Institution’s Center for Middle East Policy, argues that Turkish force in the region has helped to establish an operational coherence to historically competing FSA factions.

“Many of the deficiencies that plagued the armed opposition are less visible,” he said. “We no longer see unit commanders making impetuous decisions about targets that will become the focus of opposition operations, and a greater degree of planning and identifying how to deploy forces.”

Mona Yacoubian, senior advisor for Syria, Middle East and North Africa at the United States Institute for Peace, says a growing Kurdish insurgency in the FSA-held city of Afrin is evidence against that analysis. “The FSA elements still suffer from a lack of discipline, [it is] particularly evident in their conduct in Afrin. I’m not sure there’s much of strategy at this point.”

And despite that enduring Turkish support, the FSA faces challenges from other groups in that region. 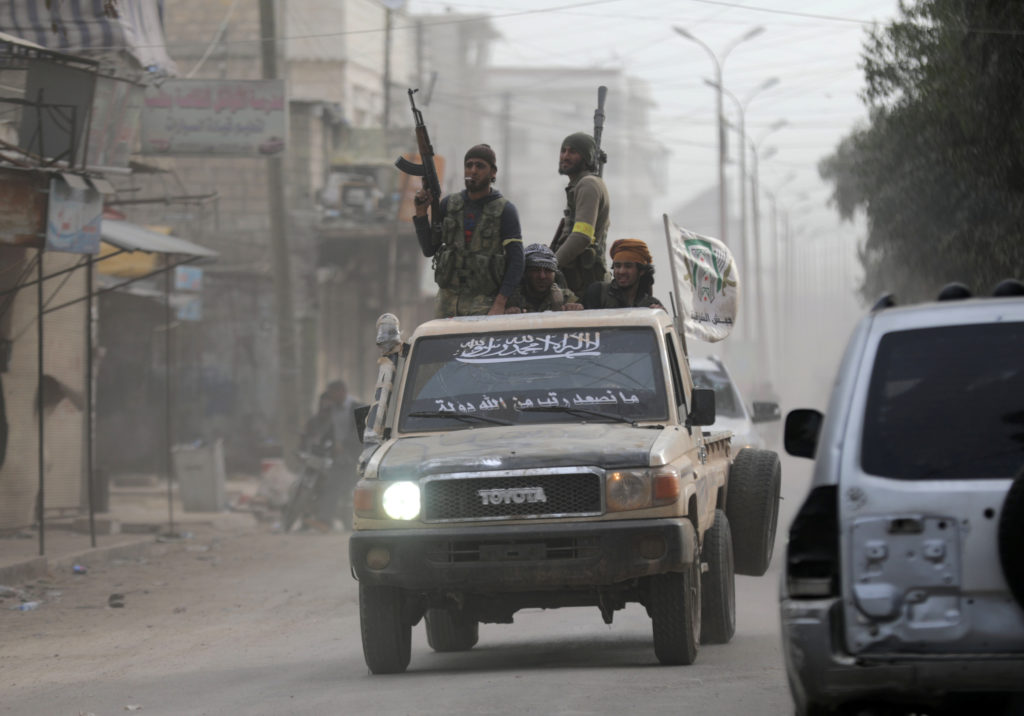 Turkish-backed Free Syrian Army fighters hold their weapons as they stand on the back of a truck in Afrin, Syria, on March 18, 2018. Photo by REUTERS/Khalil Ashawi

The group Hyatt Tahrir al-Sham (HTS), a Salafi jihadist off-shoot of Jabhat al-Nusra and al-Qaida, increasingly dominates major portions of the province. According to a Center for Strategic & International Studies report, HTS maintains a fighting force of between 12,000 and 15,000 militants as of October 2018, after shifts in Syria’s broader jihadist networks factioned their forces.

Sara Kayyali, a Syria researcher for Human Rights Watch, says regime bombardment has played a part in the group’s expansion.

“HTS plays a key role in the northwest,” she said. “Since the start of the [Idlib] offensive a majority of [rebel] groups have joined HTS in its fight against the Syrian government. ”

Mouas Moustafa, executive director of the Syrian Emergency Task Force, which primarily works in Idlib, says despite the group’s expanding influence, it does not enjoy public support.

“They are barely tolerated and not liked at all by local populations,” he said. “HTS is seen as extreme and authoritarian. The fact that the regime continues to target civilians is one reason HTS is tolerated, but as soon as there is a lull in violence, populations go back to protesting HTS.”

Looming over all of this is the fact that the northwest is bearing the brunt of the Assad regime’s aggression. The government began this recent offensive against the rebel enclave in April, saying it was responding to violations of a “de-escalation” truce negotiated last year between regime-allied Russia and opposition-allied Turkey. It’s a campaign that has driven scores of Idlib residents out of the city and toward the Turkish border. This week’s truce aims to create a Turkish-Russian buffer zone in that area.

“The best (the FSA) can hope for now, is the effective defense of the territory it currently holds. Working to hold that ground even as conditions …continue to deteriorate in this relentless assault by the regime and Russia,” added Heydemann. “And that’s a very difficult thing to do.”

Yacoubian says the violence over the last few months is part of a broader regime strategy. This includes re-establishing control over an important north-south highway that passes through the territory, and facilitating regional trade and commerce.

“The violence we’re seeing now is designed to begin to soften those areas on the periphery,” she said. “It would serve as a strategic victory that would allow [the regime] to trumpet its march toward retaking every square inch of the country.”

Moustafa adds that the battle for Idlib is more than economic or military strategy.

“Idlib represents all of Syria. The Assad regime cannot declare victory without it,” he said. “Millions of people there are from Homs, Daraa, Aleppo. The some 12 million displaced Syrians are either outside of Syria or they are in Idlib, so [the province] became all of Syria. Every city, every countryside, every farm is there.”

Who is in the Kurdish east?

Northeastern Syria is widely controlled by the Syrian Democratic Forces (SDF), an umbrella alliance of local militias with a diverse makeup, largely commanded and controlled by Syrian Kurds. Major cities under Kurdish control are Raqqa, Qamishli and Hasakah.

At the center of regional tensions in the northeast is the SDF’s largest militia, the People’s Protection Unit, known as the YPG. The group was founded in 2004 as the armed wing of the Kurdish Democratic Union Party (PKK).

The U.S. began supporting the YPG against the Islamic State group’s emergence from Kobane in 2014. About a thousand U.S. special operations forces remain in Syria’s northeast. President Donald Trump reversed his decision to withdraw troops from Syria once ISIS’s last territorial stronghold in eastern Baghouz was toppled.

At a press briefing Thursday, Ambassador Jim Jeffrey, the U.S.’s special representative for Syria, reiterated the American commitment to its coalition partners, but called for more burden-sharing.

“What we’re looking [into] is to get coalition partners to make more of a contribution of on-the-ground forces to continue the training, equipping and accompanying of local forces,” said Jeffrey. “We are committed to those who have fought with us not being attacked.”

That enduring alliance between the U.S. and the YPG is escalating already growing tensions between Washington and Ankara, which considers the PKK a terrorist group. Just last week, the Turkish government rejected the latest U.S. proposals to establish a safe zone in Syria.

“Our patience is wearing thin and we have the impression that the U.S. is stalling,” Turkish Foreign Minister Mevlut Cavusoglu said in a televised address. “Otherwise, we are committed to taking some steps alone.”.

Responding Thursday, Jeffrey maintained that the U.S. was committed to reaching a deal with Turkey.

“We’re trying to balance both of these very important concerns with one very important NATO ally and one important partner in the fight against ISIS,” Jeffrey said. “[Cavusoglu] took a pretty tough position but we’ve continued talking at various levels.”

This week, CNN Turkey reported that Turkish President Recep Tayyip Erdogan met with his National Security Council to weigh a potential military operation in the region.

“I wouldn’t be surprised if they did something. But that ‘something’ could just be cross border shelling, or it could be a quick and rapid move into the northeast in a very small number,” added Charles Lister, senior fellow and director of the Countering Terrorism and Extremism Program at the Middle East Institute. “I’d be amazed if the Turks put themselves in a situation where the U.S. might retaliate.”

All of this is threatening to fracture a Kurdish coalition, now also grappling with an increasingly restless Arab population within its borders.

“There are several pressures growing [in the northeast],” said Yacoubian. “Arab disaffection, mounting pressure and the threat of an incursion by Turkey, the risk of a precipitous U.S. withdrawal — [it] could open significant fractures in the SDF coalition.”

Lister agrees that a hasty U.S. departure there could crumble a cracked Kurdish foundation.

“The differences between these factions particularly have started to become a lot clearer in eastern Syria. For the SDF, the primary hope is that the U.S. will stay in Syria and continue to guarantee their territories,” said Lister. “The key dynamic everyone is watching right now is whether the SDF can hold together as a united coalition.”

The Assad regime’s swift and brutal crackdown on dissent, the emergence of the Islamic State, and opposition violence have all helped to erode Syrian civil society.

Heydemann argues that was a targeted goal for the Assad regime.

“Villages that were widely known as kind of [democratic] exemplars of what an alternative to Assad might look like— are [the] areas that have been most heavily subjected to bombing artillery. Many of those villages don’t have many people in them anymore,” he said.

“Even now, pockets of peaceful dissent have found creative ways of pushing back against this regime.”

“The start of the Syrian conflict began as an alternative to an oppressive regime, and in many ways the opposition has failed to live up to that expectation,” she said. “Many [opposition] forces have generated the same oppressive tendencies that Syrians have been trying to escape. That’s a sad reality and a failure we need to contend with.”

Throughout Syria, though, civilian advocates are helping communities cope with the trauma of years of brutality, and pushing back on the regime.

“Civil society organizations have become the spinal cord of Syrian society,” said Mustapha. “They train media activists and independent journalists. They are key in emotional support and psychosocial therapy. They also help provide education and vocational training. It’s hard to overstate the influence of civil society on Syrian lives.”

“Despite being nearly in the ninth year of one of the most brutal conflicts of the 21st century… even now, pockets of peaceful dissent have found creative ways of pushing back against this regime,” said Yacoubian.

It’s a faction of “the opposition” in Syria that Mustapha says is often overlooked.

“Most of the time when people look at Syria they think ISIS, or the Kurds, or the Assad regime and Turkey,” added Mustapha. “They miss the fact that the Syrian people have been the ones struggling against all of these forces, and they’re still there, fighting for their freedom… It’s the biggest testament to the Syrian people.”

Left: Displaced Syrians hold Free Syrian Army flags during a protest calling for an end to the strikes and for Ankara to open the frontier at the Atmeh crossing on the Syrian-Turkish border, in Idlib governorate, Syria, on May 31, 2019. Photo by REUTERS/Khalil Ashawi