Why is Turkey attacking northwest Syria?

A new front is opening in the Syrian civil war, and a turning point, it seems, is coming for U.S.-Turkey relations.

Long-simmering tensions between the two NATO allies have boiled over in recent weeks over the U.S. arming and supporting Kurdish militia in the fight against ISIS in Syria.

It follows the U.S. announcement of its plans to create a Kurdish-led “border force” of 30,000 fighters inside Syria, who are linked to Kurdish insurgents known as the PKK in Turkey.

Turkey called that a “grave threat,” and threatened to attack U.S.-backed Syrian Kurdish militia, called the People’s Protection Units, or YPG, across its border in northwest Syria.

Days later, Secretary of State Rex Tillerson called for an “indefinite” U.S. military presence in Syria, as part of a long-term strategy to oust President Bashar al-Assad and defeat ISIS.

Turkey then launched its planned military campaign, called “Operation Olive Branch.” Air and ground attacks first focused on the city of Afrin — a Kurdish enclave of about 200,000 people — and have since spread to the surrounding region. 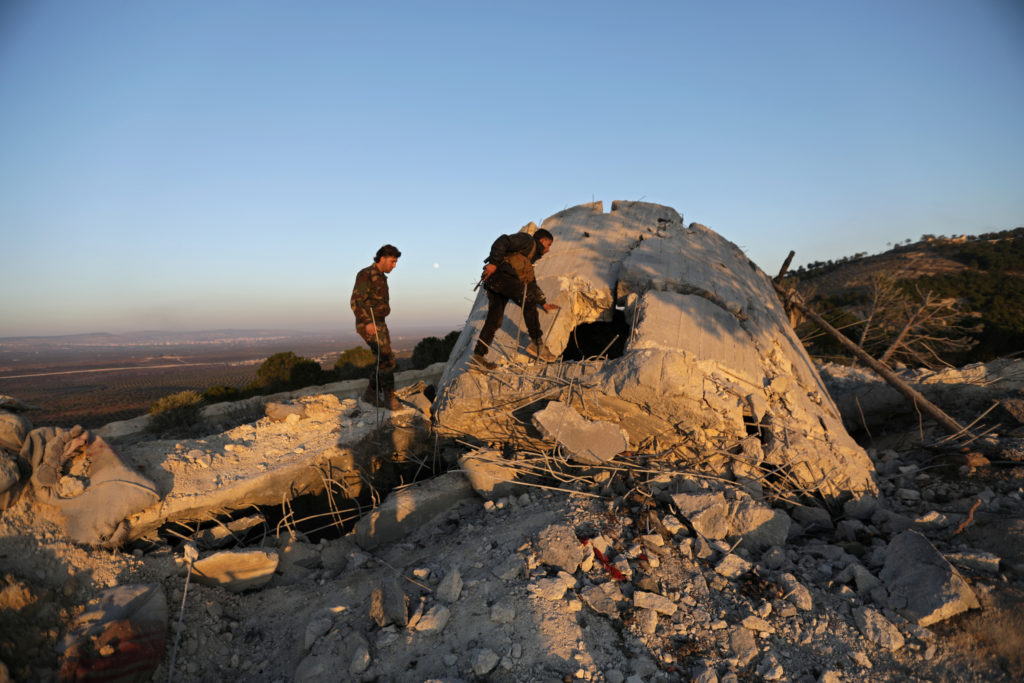 Turkish officials say at least five of their soldiers and 24 allied Syrian fighters have been killed. Rockets fired recently from the Afrin region into Turkey have killed at least four Turks, and injured another 37. The Britain-based Syrian Observatory for Human Rights says at least 68 civilians in the Afrin region have been killed in the fighting, as Turkish warplanes continue to bombard area villages, including at least 21 children. The death toll among YPG and allied Arab fighters is roughly 91.

The fighting is reigniting questions about the future of the fight against ISIS in Syria, as well as whether Turkey and the U.S. can trust each other as allies.

Here’s what we know, and what’s next.

HOW DID WE GET HERE?

As the fight against ISIS ramped up, the U.S. partnered with the YPG, which comprises mainly Syrian Kurds.

Turkey views the YPG as an extension of another group called the Kurdistan Workers’ Party (PKK), which routinely conducts insurgent attacks inside Turkey. Turkey and the United States both consider the PKK a terrorist organization. Turkey has voiced its opposition to the U.S. arming and training YPG fighters since it began doing so in 2014, but has mainly focused it’s military efforts in Syria on defeating ISIS.

Then, last month, the U.S. military announced the creation of a 30,000 fighter-strong border force inside Syria. The majority of that force would be YPG fighters. The rest would likely be Arab fighters that — along with YPG fighters — make up the diverse Syrian Democratic Forces alliance, (SDF) currently fighting ISIS, officials said.

The Turks took this as a provocation. President Recep Tayyip Erdogan condemned the U.S. plan as the U.S. building a “terror army” along the Turkish border, and threatened to retaliate to protect its national security. Within days Turkish forces began attacking Afrin. Fighting alongside the Turks are Syrian Arab forces called the Free Syrian Army (FSA). The FSA was also largely U.S.-backed, putting two U.S.-trained militias on opposite sides of the battlefield.

Since the operation began, Erdogan has pledged to “clean our entire border” of the Kurdish militia. 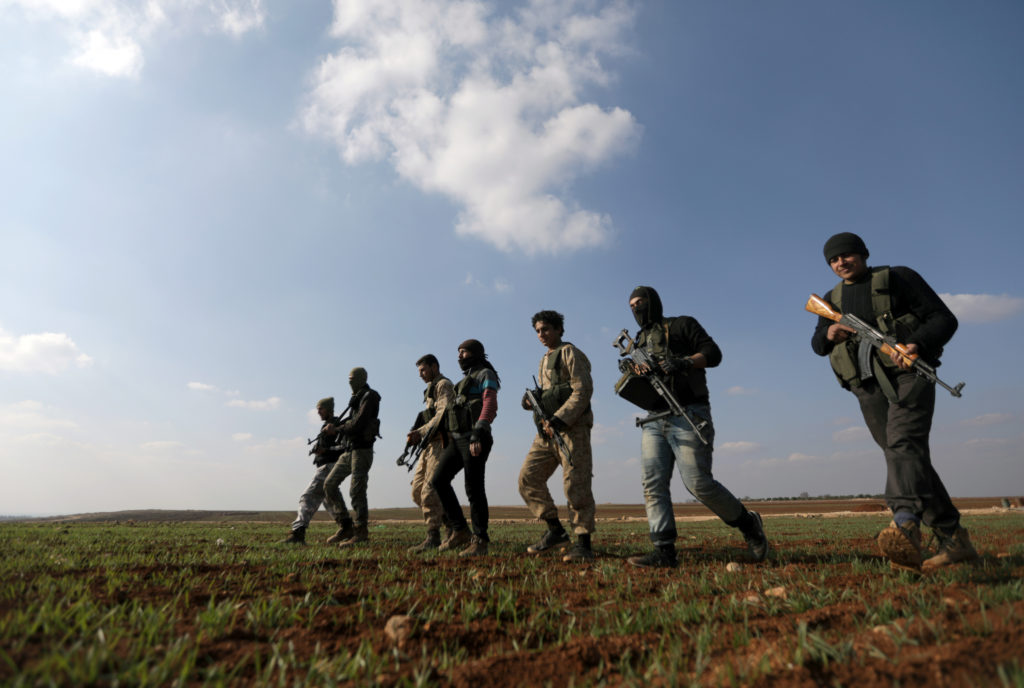 Kurdish fighters, fighting alongside the Free Syrian Army, hold their weapons as they walk together in northern Aleppo countryside, Syria February 1, 2018. Photo by Khalil Ashawi/Reuters

Various U.S. officials, including Secretary of State Rex Tillerson, have since clarified that the term “border force” was misleading. Dana White, assistant to the Secretary of Defense for public affairs, said the U.S. is simply continuing its policy to train and equip local forces to fight ISIS, by maintaining a “force that is focused solely on internal security.” But she reiterated Defense Secretary Jim Mattis’ comments earlier last month that Turkey has “legitimate security concerns” regarding the proximity of Kurdish fighters to its border.

Though the State Department and White House also publicly acknowledge Turkey’s security concerns, the U.S. so far has continued to support the YPG.

Adding to that tension is disagreement between Washington and Ankara about what was said in a phone call between President Trump and Erdogan last week. The White House readout of the Jan. 24 call says Trump urged Turkey to “to de-escalate, limit its military actions and avoid civilian casualties” in Syria, while Turkey says Trump agreed to stop arming the Kurds. That would be a major shift in U.S. policy and its fight in Syria. However, Trump has reportedly floated that offer before without following through.

Erdogan has also threatened to send Turkish troops into Manbij, a Syrian city slightly west of the Euphrates. Manbij is currently under the control of mainly local Arab forces aligned with the SDF. U.S. special forces are positioned outside the city and patrol the region. If Erdogan were to push into Manbij, it would put Turkey in direct military confrontation with the U.S., a NATO ally.

Gen. Joseph Votel, Commander of U.S. forces in the Middle East, told CNN this week that the U.S. is not considering withdrawing troops from Manbij, saying it was “not something we are looking into.”

HOW DOES THIS THREATEN THE TURKEY-U.S. ALLIANCE?

In an interview with PBS NewsHour this week, Serdar Kilic, Turkey’s ambassador to the U.S., said that Turkey does not intend to put U.S. troops in harm’s way. That was in stark contrast to Erdogan’s threats last week that he would attack American troops that try to intervene.

Judy Woodruff talks with Serdar Kilic, Turkey’s ambassador to the U.S., for the Turkish perspective on the conflict in Syria.

“We are long-term allies and I am confident that we are not going to come to that,” Kilic said. But he also urged U.S. officials to “take actions… to terminate their support” of the YPG — something that he says Turkey has asked of the U.S. “time and again.”

Meanwhile, House Armed Services Chairman Mac Thornberry, R-Texas, told the NewsHour’s Lisa Desjardins that while the U.S. has numerous concerns with Turkey, “we need to find ways to work with them closer. But they also need to make efforts not to impair that relationship.”

“We’re not in a crisis. Turkey is an ally, and we’re going to work with them. But this current issue, offensive, is a distraction. And we have to focus as allies and keep on the mission at hand, and that’s defeating ISIS,” White said in the Jan. 25 Defense Department briefing.

“Turkey is a NATO ally and we don’t always see everything the same,” White added this week. “We’ve asked them to restrain themselves and to limit this offensive.”

Ambassador Frederic C. Hof, Director of the Atlantic Council’s Rafik Hariri Center for the Middle East, said diplomacy is still a viable option. “Somehow trying to get Turkey more directly involved in the stabilization of non-Kurdish parts of eastern Syria may be the way forward to getting us to getting us back on the same page,” said Hof, who has said he left the Obama administration over its lack of forceful Syria policy.

If U.S. and Turkish troops end up exchanging fire, that would be a “crisis,” Hof said.

WHAT IS TURKEY’S MOTIVATION?

All of this comes while Erdogan is gearing up for Turkey’s 2019 presidential election. If re-elected, he would stay in power to implement his long-touted “2023 vision” at the centennial of the Turkish Republic’s 1923 founding by the nationalist revolutionary Mustafa Kernal Ataturk. That would ultimately position Erdogan as the new father of modern Turkey.

But at the same time, Erdogan is trying to manage the long-running security risk from attacks by PKK insurgents in Turkey, which continue despite his promise to quash them.

Bulent Aliriza, Director of the Turkey Project at the Center for Strategic and International Studies, says Erdogan is “playing to the mood of the Turkish population” and his nationalist base by exploiting Turks’ fears of terrorism at home. Aliriza says Erdogan is able to use this decision to attack Afrin as campaign fodder, while railing against the Kurds in carefully staged rallies in Ankara. 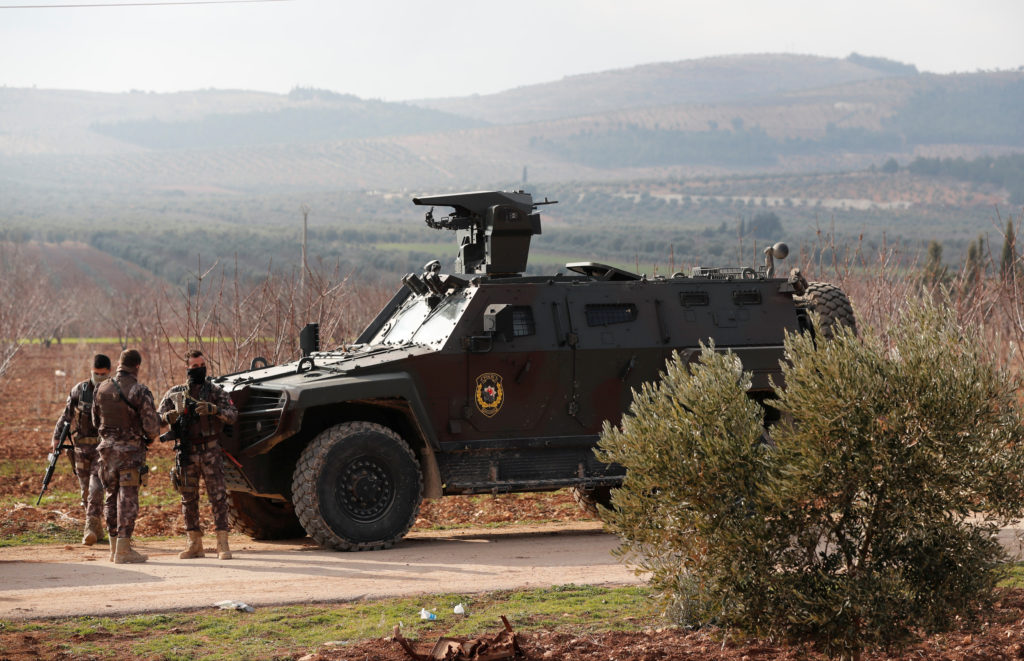 IS RUSSIA INVOLVED IN THIS?

Russian President Vladimir Putin is involved tangentially, but significantly. A strong supporter of Assad’s regime, Russia has taken a backseat role in Operation Olive Branch. Hof says it’s not a coincidence that Russia cleared its airspace to allow the Turks to conduct air attacks when they could have refused.

“What [Putin] really wants is for this thing to spin out of control and for two NATO allies to end up face to face with one another, exchanging fire and absorbing casualties,” Hof said. “If he can drive a spike right into the middle of NATO’s heart, that’s a good day for the president of Russia.” In another sign of strengthening ties between Moscow and Ankara, Russia recently agreed to supply Turkey with about $2.5 billion worth of missile systems, which are incompatible with NATO’s military structure, despite warnings from NATO officials.

Last month, White House Homeland Security adviser Tom Bossert told reporters at the World Economic Forum in Davos, Switzerland, that the U.S. expects Erdogan to end operations in Afrin before further escalation. “I think that he’ll make that decision here with the full support of the United States,” Bossert added.

Steven Cook, a senior fellow for Middle East and Africa Studies at the Council on Foreign Relations, says Bossert’s assumption is likely correct. He added he’s “deeply skeptical” the Turks would head to Manbij risk direct conflict with U.S. forces.

Cook dismissed what he calls “Turkish bluster” threatening to advance on Manbij, and says that Erdogan has been threatening to push East for some time.

Hof also agrees. He said Erdogan is “trying to make a political point,” but would not endanger American forces. “The real danger here is that things could spin out of control,” Hof said.

Even if the Kurds are beaten in Afrin, said Hof, it’s possible that they could retaliate elsewhere in Syria, prompting further action by Turkey. The end result, he said, could be U.S. troops unintentionally caught in the crossfire.

Aliriza though warns Erdogan is unlikely to abandon the offensive any time soon, saying “Erdogan has made no indication that he’s going to stop.” But until Erdogan advances on Manbij, he said, “for now, it’s a limited operation with limited damage to U.S.-Turkish relations.”