Syria and Turkey: A Complex Relationship

Despite being geographic neighbors, Syria and Turkey’s political relationship historically hasn’t been very close, but things were on the mend — that is, until the Arab Spring hit.

Starting on Friday, the PBS NewsHour will present a series of reports on how the violent conflict in Syria is impacting neighboring Turkey.

We asked Joshua Landis, director of the Center for Middle East Studies and an associate professor of Middle Eastern studies at the University of Oklahoma, for some insight into the complicated relationship between the two countries.

For most of the last century, Turkey and Syria’s relationship was “extremely bad,” he said. Turkey was an imperial power starting in 1517 — known as the Ottoman Empire — and by the time nationalism began to take root in Syria at the turn of the 20th century, the Turks began to be seen as oppressors.

By the end of World War I, the Ottomans were defeated, but they had killed a lot of Syrians who had joined the Arab revolt against them. “This left a very bitter taste,” Landis said. 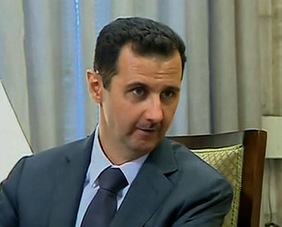 The relationship remained tense under Syrian leader Hafez al-Assad, the father of current President Bashar al-Assad (pictured at right). During the elder Assad’s leadership, Turkey took a peninsula-looking piece of land — Hatay province — from Syria, and still has it to this day, though some Syrian maps still show it as part of their country, Landis said.

The other major problem involved water resources. In the 1970s, Turkey began damming the Tigris and Euphrates rivers, which both start in Turkey.

“This was a major blow to Syria and Iraq, which are now drought-ridden water-impoverished countries,” said Landis. “Much of that is because they’ve overpopulated and managed their water badly. But a lot of it is because Turkey used its position of superior strength and at the top of the headwaters to great advantage.”

After increasing pressure from Turkey, Syria turned over Kurdish separatist leader Abdullah Ocalan in the late 1990s who remains imprisoned in Turkey. The Kurdistan Workers Party, or PKK, is still allied with Syria against Turkey — contributing to the complex ethnic dynamic there.

The handover of Ocalan helped relations, which improved still further in 2003 when the United States invaded Iraq. Assad was worried about an invasion of his own country, and he began looking to shore up his local alliances, including Turkey. And Turkey, which was unhappy with the U.S. action in Iraq, was glad to pursue better ties with Syria, said Landis.

In 2004, Bashar al-Assad was the first Syrian president to go to Turkey since World War I, said Landis, and the two nations began to talk about how to settle their disputes. They opened their borders to trade. Syrians and Turks began visiting each other’s countries for shopping and vacations, and in the process discovered a common cultural bond.

“Turks said ‘[Syria] looks like us. This is our history, this is some of the best Ottoman architecture and great souks (street markets)’,” Landis said.

But that love affair took a beating once the Arab Spring began, he explained. It showed how different the two countries really were. 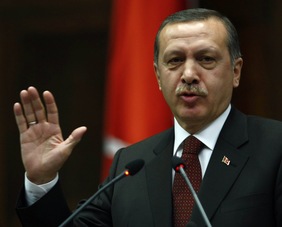 Turkish Prime Minister Recep Tayyip Erdogan (pictured at right) jumped to the defense of the Syrian opposition in the name of democracy and to help cultivate a favorable relationship with whatever government would take the place of Assad.

Erdogan tried for a few months to talk Assad into relinquishing power, but when that failed he turned against Assad, saying he had to go.

Turkey’s role in helping the opposition, however, has made things more difficult within the country, said Landis. Uncontrollable militias and other hardline fighters are among those battling Assad, and Turkish citizens — particularly Shiite Turks — don’t want to be involved.

“Even if they don’t all sympathize with the Alawites (an offshoot of Shiite Islam of which Assad is a member), they don’t like the muscular Sunni militant aspect of this insurgency,” Landis said.

Also, the brutal battle between the Syrian opposition and government forces is causing many Syrians to cross the border into Turkey to escape the violence, creating a humanitarian crisis that is straining Turkish resources.

“Turkey has a 530-mile border with Syria, and Syria is melting down along ethnic lines, sectarian lines, economically — in every way,” said Landis.

Henri Barkey of Lehigh University and Hisham Melhem of al-Arabiya News delved into the tensions between Turkey and Syria on the Oct. 4 NewsHour:

Left: Residents from the northern Syrian town of Ras al-Ain cross a border fence into the Turkish town of Ceylanpinar to escape the Syrian bombing of their rebel-held town on Nov. 12. Photo by Murad Sezer/Reuters