BEIJING — China’s intensified tariff war with the Trump administration is threatening Beijing’s ambition to transform itself into the dominant player in global technology.

The United States is a vital customer and source of technology for Chinese makers of electronics, medical equipment and other high-tech exports — industries that the ruling Communist Party sees as the heart of its economic future.

Yet to the Trump administration, they’re a threat to America’s industrial leadership.

Beijing managed to keep Chinese economic growth steady in the most recent quarter despite a drop in exports to the United States. It did so by boosting government spending and bank lending. But China’s technology exporters suffered huge sales drops of up to 40 percent, which ate into profits that pay for technology research.

The tariff war is compounding the pain felt by many Chinese companies. They are already enduring stiffened resistance in the United States and Europe to Chinese acquisitions of technology through joint ventures with foreign companies or, with financing by state-run banks, outright purchases.

China might now have to take the “tougher route” of developing more of its own technology, with less access to foreign partners and know-how, said Rajiv Biswas, chief Asia economist for IHS Markit.

“It may be a slower path,” Biswas said.

All of this has helped make China an emerging heavyweight in telecoms, artificial intelligence and other fields. Yet the United States, Europe, Japan and other governments complain that Beijing has done so in part by stealing technology or pressuring foreign companies to hand over trade secrets.

Washington is pushing Beijing to roll back plans for a government-led creation of global competitors in robotics, electric cars, artificial intelligence and an array of emerging technologies. Beijing’s trading partners argue that such plans violate its commitments to further open its vast consumer and business markets.

The struggle compounds the challenges for President Xi Jinping’s government by threatening to delay or disrupt its economic plans. China’s leaders are reluctant to yield; they need higher-tech industries to keep incomes rising. Many producers of textiles, shoes and toys have already migrated to Vietnam, Cambodia and other lower-cost economies.

China’s ruling Communist Party responded to an economic downturn last year by stepping up spending and lending. That effort reversed a campaign to curb reliance on debt, which had soared so high that rating agencies had downgraded China’s credit rating for government borrowing.

Abroad, Xi has been forced to overhaul his multibillion-dollar “Belt and Road” initiative to build railways and other infrastructure. In response to complaints that Beijing is saddling some countries with too much debt, the government has written off some loans and renegotiated contracts.

The tariff war was sparked by years of yawning U.S. trade deficits with China and by complaints — by the Trump administration and many independent trade experts — that Beijing was engaging in predatory and illicit practices, including the theft of technology. The first U.S. penalties targeted high-tech Chinese goods that American officials said benefited from improper support from Beijing. 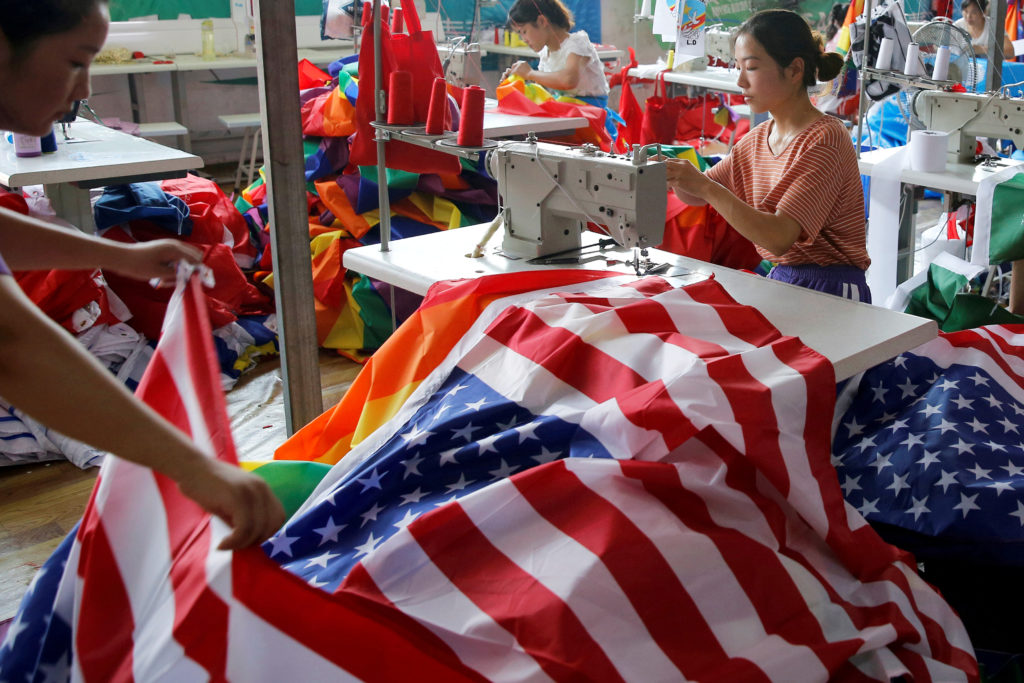 Its impact spread as President Donald Trump extended tariff increases to Chinese exporters of handbags, furniture and other goods. Those higher import taxes heightened the threat of job losses — a political risk for an unelected party that derives its claim to power in no small part from having managed three decades of explosive economic growth.

On the surface at least, the impact of Friday’s U.S. tariff hike “is relatively modest,” Brian Coulton, chief economist for Fitch Ratings, said in a report. But if Trump proceeds with his threat to extend 25% tariffs to all imports from China, that “would be a much more material threat to China’s growth outlook,” Coulton said.

Xi’s personal standing has been hurt by slowing growth and by last year’s decision to eliminate term limits for his office as president, said Zhang Lifang, an independent political commentator in Beijing.

“I think these two things are very stressful for him, both economically and politically,” Zhang said.

In the United States, Trump vetoed the 2017 purchase of a chipmaker, Lattice Semiconductor, that was financed by a Chinese government fund.

Foreign manufacturers of consumer electronics and other goods already are shifting investments to Southeast Asia to cut costs, thereby hurting demand for Chinese parts suppliers and sapping revenue they would use to develop technology.

“Boardrooms of multinationals, including possibly Chinese companies, might decide they need to have more manufacturing capability outside China to reduce this risk,” Biswas said .

That shift, accelerated by the pressure from U.S. tariffs, promises a potential windfall for other Asian economies.

Taiwanese President Tsai Ing-wen has suggested that the U.S.-China tariff war might help her government woo back manufacturers who had moved to the mainland in search of lower costs.

“Our goal is to speed up Taiwanese business people’s coming back to rebuild a high added-value supply chain and encourage industries to transform and upgrade themselves,” Tsai said.

AP videojournalists Fu Ting in Beijing and Taijing Wu in Taipei contributed to this report.