NAIROBI, Kenya (AP) — Even as Ethiopia’s warring sides attend their first formal peace talks in a devastating two-year conflict, witnesses in the country’s embattled Tigray region tell The Associated Press that forces from neighboring Eritrea are killing some civilians and looting as they and allied Ethiopian forces head for the regional capital.

With internet and telephone access to the region cut off, and independent journalists barred from Tigray, observers say it is increasingly hard to reach people for accounts of the fighting that erupted again in August after a monthslong lull.

The United States now estimates hundreds of thousands of people could have been killed in the war marked by abuses on all sides as fears grow the conflict has reached its deadliest phase.

The AP spoke with witnesses from the towns of Shire, Axum and Adwa, where Ethiopian and allied forces are present as they battle Tigray forces. All spoke on condition of anonymity for fear of retaliation. It is not clear how many civilians have been killed in recent weeks.

An aid worker from Axum who relocated to Shire this week fearing for his life said civilians were being killed by Eritrean forces there since at least Sunday.

“I witnessed four dead bodies in a village some 4 kilometers away from Axum” while fleeing Tuesday, he said, and described the bodies as being in civilian clothing. “People are living under nights of terror.”

The Eritreans also were burning crops, he said — an echo of their first occupation in the early weeks of the war.

In Shire, a staffer with an international humanitarian organization said Eritrean forces were looting vehicles and household items, in some cases loading stolen goods onto camels they brought with them. The Eritreans also entered a camp for displaced people, he said, and earlier controlled the local airport. It was not clear whether they still did.

Ethiopian forces occasionally tried to stop Eritrean forces, the two witnesses said. “But they simply watch them most of the time,” the man from Axum said. “Sometimes they try to stop them, but it is beyond their capacity.”

An Ethiopian government spokesman, Legesse Tulu, did not respond to questions about the allegation and whether Ethiopian forces have any control over Eritrean ones. 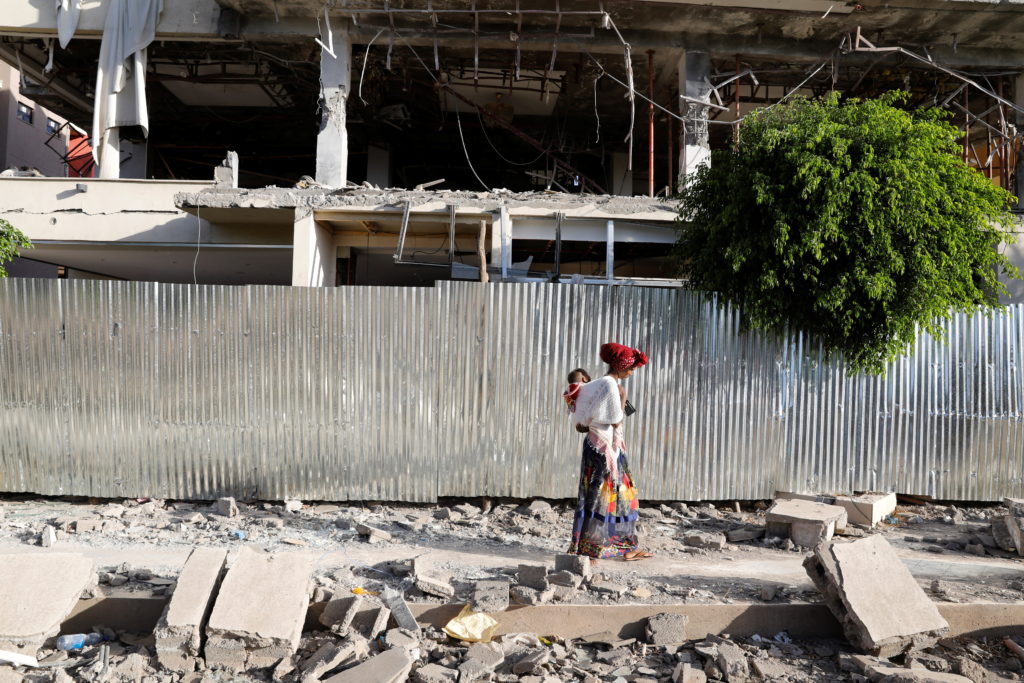 A woman walks past the rubble of a building damaged by fighting in the town of Shire, Tigray region, Ethiopia, March 17, 2021. Photo by Baz Ratner/REUTERS

The African Union-led peace talks between the Ethiopian government and Tigray regional authorities are being held in South Africa, whose government has said the discussions will end Sunday. But Eritrea isn’t part of talks, and it’s not clear whether the deeply repressive country bordering the Tigray region will heed any agreement.

Tigray authorities want the Eritreans out of the region, in addition to the restoration of basic services such as electricity, banking and unrestricted access to humanitarian aid. The United Nations says aid delivery to Tigray ended Aug. 23, a day before fighting resumed, because of “lack of federal clearances,” and it warns of widespread malnutrition and a lack of medicines.

A leader of the Tigray forces, Tadesse Werede, said Thursday the Ethiopian government should ensure that Eritrean forces leave Tigray for any peace effort to be sustainable.

In the earliest weeks of the war, witnesses told the AP of widespread looting and violence including killings and rapes by forces from Eritrea, whose government under the only president the country has ever had, Isaias Afwerki, has long been hostile to Tigray leaders. For months, Ethiopian Prime Minister Abiy Ahmed denied the Eritreans’ presence in Tigray.

Since fighting resumed, the Eritreans have returned. People inside Eritrea have described new military mobilization, and satellite imagery has shown a military buildup near the border with the Tigray region.

Now, as the war with abuses documented on all sides marks two years next week, international expressions of alarm over atrocities in Tigray have soared. The U.S. Holocaust Memorial Museum warned this week of a “heightened risk of genocide,” noting “the situation has deteriorated exponentially as Ethiopian security forces, supported by Eritrean forces and Amhara special forces, have seized key towns and cities.”

Ethiopia’s government on Friday issued an angry statement alleging “extreme slander” and said it may be “forced to weigh its options and consider its relations with some states and entities.”

And Eritrea’s government in an open letter to the museum accused it of recycling defamatory accusations but acknowledged a “huge loss of life and destruction of property” in the conflict.

The letter did not address the presence of Eritrean forces in Tigray.

But witnesses confirmed it in towns including Adwa, where a humanitarian source said Eritrean and Ethiopian soldiers engaged in heavy fighting this week with tanks and long-range weapons on its outskirts. Terrified civilians are fleeing for safety, they said.

Long trapped in Tigray, tens of thousands of civilians are again on the move, some on foot as the U.N. says little fuel has been allowed into the region.

Shire was like a dead city, the humanitarian staffer there said. One of the humanitarian workers who fled to the regional capital, Mekele, told the AP the sometimes deadly bombardment of Shire had intensified in recent weeks. Now Ethiopian and Eritrean forces control the town, the worker said, their identities made clear by their uniforms and vehicles.

On Friday, a health worker in Mekele said fighting had not reached the regional capital. Tigray forces spokesman Getachew Reda, one of the representatives at the peace talks, asserted in a tweet that fighting was 160 kilometers (100 miles) away.

The war continues to be deadly for all involved. On Friday, the Ethiopian Red Cross Society said one of its ambulance drivers was killed by “armed forces” and injured passengers were shot and killed. The driver had been transporting the injured from Adwa to the neighboring Amhara region.

Left: A damaged Eritrean military tank is seen near the town of Wikro, Ethiopia, March 14, 2021. Photo by Baz Ratner/REUTERS