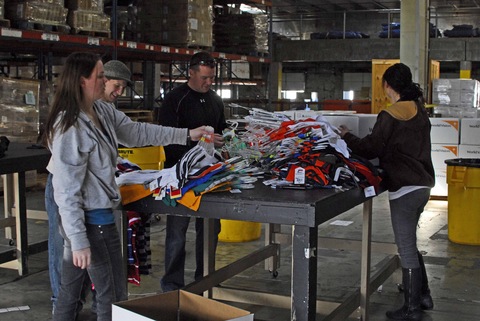 Any parent can testify to the fact that teenagers can sometimes resemble a plague of locusts — they can eat you out of house and home.

So it may be something of a surprise that 300,000 American teens volunteered to go completely without food for more than a day last weekend as part of World Vision’s 30 Hour Famine Project.

Here in Denver, some 78 youth groups — about 2,000 young people — stopped eating on Friday afternoon and consumed only fruit juice and water until Saturday night. The idea was to give them a feeling for what it’s like to live in poverty.

The “Famine” is designed to raise money for World Vision, a Christian humanitarian organization serving 100 million people in nearly 100 countries. The organization has been staging this event since 1992, and has collected some $140 million worldwide. Each year has a different theme; this time the focus was on earthquake-ravaged Haiti.

Twenty-five young members of the Crossroads Church of Denver spent a chilly night in World Vision’s distribution warehouse in east Denver. Youth Pastor Erik Miller, who also fasted, said, “[w]e try to make them as uncomfortable as possible. Not only not getting food, we build cardboard shanties for them to sleep in.” 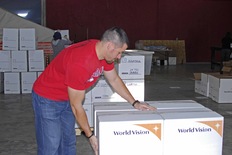 Miller, pictured at right, said they would have slept outdoors but for the fact that the surrounding industrial district wasn’t as safe as they would have liked. Even so, high school senior Lindsey Wulf said it wasn’t easy trying to sleep on concrete. “I typically sleep on my side, so my hips were killing me all night long. You don’t really sleep because you haven’t eaten in a while,” she said.

They spent long hours on Saturday sorting through hundreds of heavy cartons of donated clothing, assembling shipments for distribution around the world. “They’re groggy, it’s the first time many of them have been without food this long ever, so I think it’s allowing them to feel what a lot of the world feels all of the time,” Miller said. “We’re very privileged in our country, we’re blessed to have what we have, this is a side of the planet that they don’t experience very often, that the majority of the world does not have it as good as we have it here.”

Miller has supervised six “30 Hour Famines” during his tenure at the church. He said students almost always experience an “aha” moment, when they actually “get it.” Miller said, “Take away the cell phone and the ear bud and you almost automatically engage a student on a different level because you’re taking away all of the things that would distract them from reality.”

High school sophomore Dylan Roby knows what he’s going through is just a pale shadow of what people in Haiti are experiencing. “We didn’t sleep outside where it was cold, and we had sleeping bags. They sleep in the dirt,” he said. “There are people over there that have only one meal a week. Over here we’re eating three or four meals a day.”

These students also didn’t have to drink water contaminated by raw sewage and risk contracting cholera, a daily challenge for people still living in the ruins of Haiti’s capital Port-au-Prince. Even so, Miller said this experience tends to increase the students’ empathy a hundredfold.