WWII allies and Germany mark 75th Battle of the Bulge

BASTOGNE, Belgium (AP) — Side by side, the Allies and former enemy Germany together marked the 75th anniversary of one of the most important battles in World War II — the Battle of the Bulge, which stopped Adolf Hitler’s last-ditch offensive to turn the tide of the war.

At dawn on Dec. 16, 1944, over 200,000 German soldiers started the most unexpected breakthrough through the dense woods of Belgium and Luxembourg’s hilly Ardennes. Making the most of the surprise move, the cold, freezing weather and wearied U.S. troops, the Germans pierced the front line so deeply it came to be known as the Battle of the Bulge.

Initially outnumbered, U.S. troops delayed the attack enough in fierce fighting to allow reinforcements to stream in and turn the tide of the battle by Christmas. After a month of fighting, the move into Germany was unstoppable.

U.S. Secretary of Defense Mark Esper paid tribute to over 19,000 U.S. troops who died in one of the bloodiest battles in the nation’s history.

“Their efforts not only defended America but also ensured that the peoples of Europe would be free again,” Esper said, calling the Battle of the Bulge “one of the greatest in American history.” 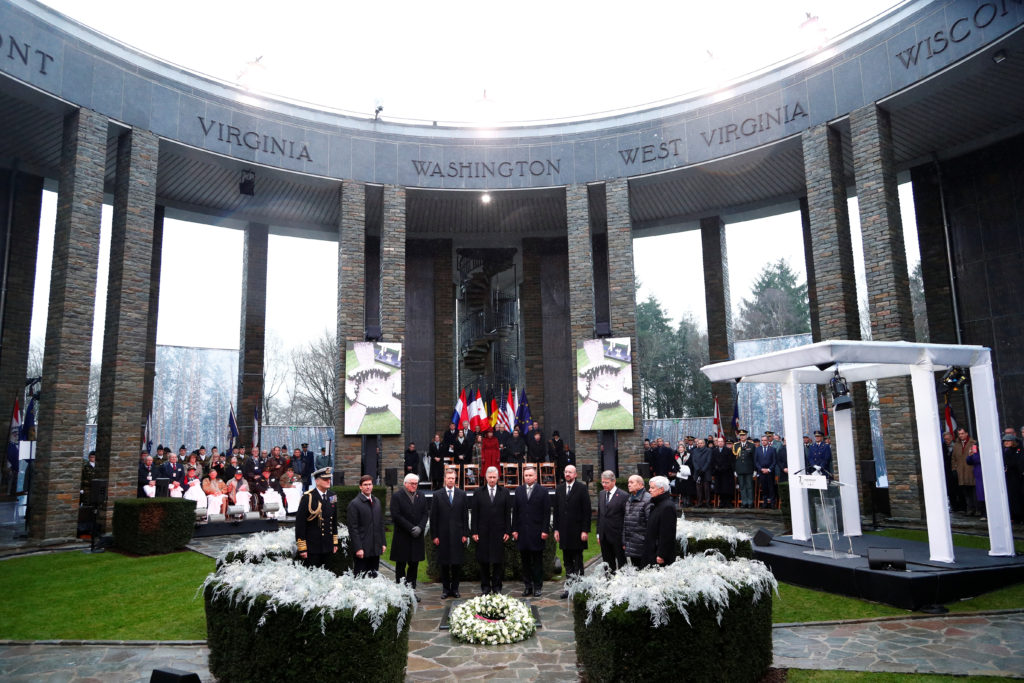 General view of the commemoration ceremony for the 75th anniversary of the Battle of the Bulge at the Mardasson World War II memorial monument in Bastogne, Belgium December 16, 2019. Photo by Francois Lenoir/Reuters

Even though German deaths also exceeded well over 10,000 in the battle that stretched deep into January, German President Frank-Walter Steinmeier took special time to thank the U.S. troops.

“On this day, we Germans would like to thank the United States of America. The American armed forces, together with their allies, liberated Europe and they also liberated Germany. We thank you,” Steinmeier said.

“Those who died were victims of hatred, delusion, and a destructive fury that originated from my country,” he said.

“Those who died were victims of hatred, delusion, and a destructive fury that originated from my country.”

Germany is now an ally of the United States and its wartime partners, united in the NATO alliance. During the poignant ceremonies under leaden skies and rain at the star-shaped Mardasson memorial in Bastogne, the current discord between the United States and several European allies over trade and security were never mentioned.

Even if it was relatively warm 6 degrees Centigrade (43 degrees Fahrenheit) compared to the shivering conditions 75 years ago, there was also a fog hanging low.

Hitler had hoped the advance would change the course of World War II by forcing U.S. and British troops to sue for peace, thus freeing Germany to focus on the rapidly advancing Soviet armies in the east.

Out of the blue at dawn, over 200,000 German troops counter-attacked across the front line in Belgium and Luxembourg, smashing into battle-weary U.S. soldiers positioned in terrain as foreign to them as it was familiar to the Germans. 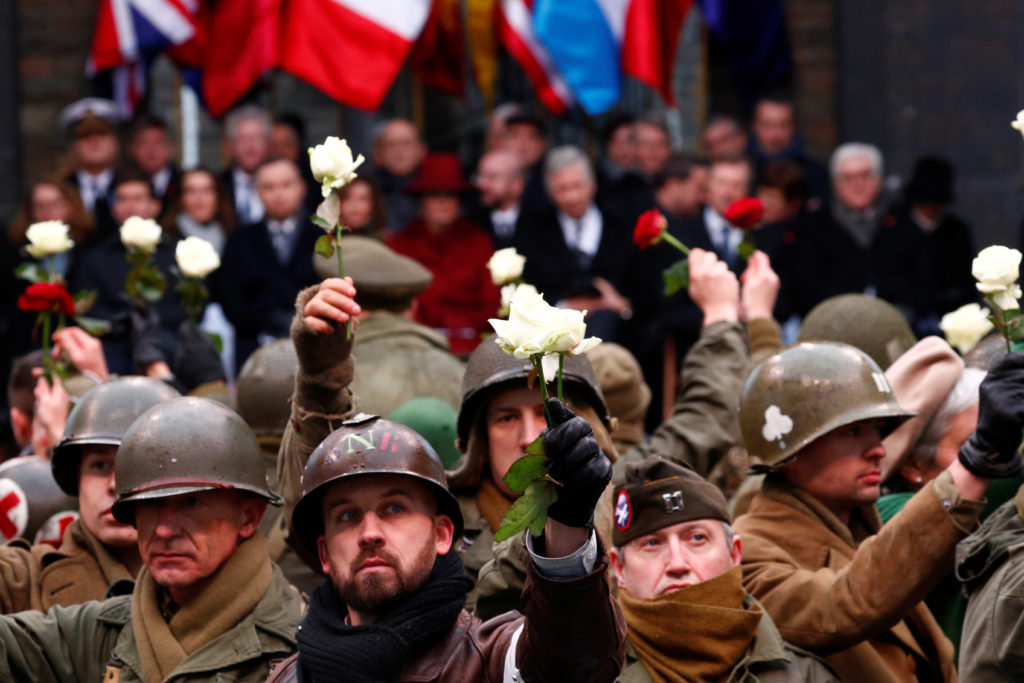 The commemoration ceremony for the 75th anniversary of the Battle of the Bulge at the Mardasson World War II memorial monument in Bastogne, Belgium December 16, 2019. Photo by Francois Lenoir/Reuters

Yet somehow, the Americans blunted the advance and started turning back the enemy for good, setting Allied troops on a roll that would end the war in Europe less than five months later.

This battle gained fame not so much for the commanders’ tactics but for the resilience of small units hampered by poor communications that stood shoulder to shoulder to deny Hitler the quick breakthrough he so desperately needed. Even though the Americans were often pushed back, they were able to delay the German advance in its crucial initial stages.

“It was ultimately the intrepid, indomitable spirit of the American soldier that brought victory.”

“It was ultimately the intrepid, indomitable spirit of the American soldier that brought victory,” Esper said.

When the fortunes of war turned, it was most visible in the southern Ardennes town of Bastogne, where surrounded U.S. troops were cut off for days with little ammunition or food.

When Brig. Gen. Anthony C. McAuliffe of the 101st Airborne received a Dec. 22 ultimatum to surrender or face total destruction, he offered one of the most famous — and brief — replies in military history: “”Nuts.” Four days later, U.S. troops broke the Nazi encirclement.

“News of their fierce defense quickly spread, boosting the morale of allied forces all along the Western Front,” Esper said.

After the fighting in the Battle of the Bulge ended on Jan. 28, 1945, Allied forces invaded Germany, eventually leading to the Nazi surrender and the end of the war in Europe.

Left: U.S. veterans attend a commemoration ceremony for the 75th anniversary of the Battle of the Bulge at the Mardasson World War II memorial monument in Bastogne, Belgium December 16, 2019. Photo by Francois Lenoir/Reuters

Taliban seeks to share power in Afghanistan’s government, but will ethnic groups approve?