A 360° View Inside the Brutal Battle for Mosul

For more than two years, Mosul, Iraq’s second-largest city, has been under ISIS control. The Iraqi army, backed by Kurdish forces and U.S. air strikes, is trying to retake it — but the battle has been grueling and deadly.

Go inside the ongoing fight in Battle for Mosul, an immersive short documentary from FRONTLINE and The Guardian. Filmed on 360° cameras, it follows Iraqi-born reporter Ghaith Abdul-Ahad as he makes a dangerous trip inside Mosul to witness the fight firsthand. From a panoramic view of vast oil fields that were set on fire by ISIS, to a journey inside a network of tunnels built by ISIS to hide from airstrikes, to a camp that’s become home to thousands of displaced civilians, Battle for Mosul is a haunting look inside a once-thriving city that’s now a key battleground in the fight against ISIS.

Battle for Mosul was produced in association with the documentary Battle for Iraq, which airs Tuesday, Jan. 31 on PBS. 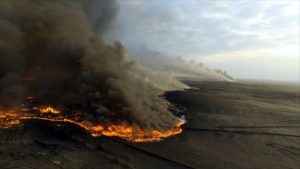