A Boy Talks To His Deported Father

For much of his childhood, Pelé Perez’s contact with his father has been through a computer screen. They’ve spent holidays apart — one Christmas, Pelé begged a statue of baby Jesus, “Please, please bring daddy home now.” But Marcos Perez, who once lived with his family in Ohio, couldn’t return. He was deported to Mexico in 2010, when Pelé was still a baby.

In Marcos Doesn’t Live Here Anymore, acclaimed filmmaker David Sutherland depicts a complex U.S. immigration system and the toll that deportation can take on a family — Pelé’s family. In the above excerpt from the film, Pelé talks to his father on a video call as he licks an ice cream sandwich.

Moments later, Pelé — who began the call cheerfully — says, “Other kids have their dad. But I don’t have my dad.” As if reality has suddenly set in, he bursts into tears, calling for his mother and crying, “I want daddy!”

In the film, Sutherland shares the story of the Perez family, split between Ohio and Mexico. Audiences watch Pelé’s mother, Elizabeth, a U.S. Marine veteran, repeatedly petition the U.S. government for her husband’s return. They follow Marcos as he deals with the frustration and sorrow of missing his children growing up, and tries to find his place in a country he left many years ago.

Marcos Doesn’t Live Here Anymore — a special presentation from FRONTLINE, Independent Lens and VOCES — offers a window into an issue that makes headlines, but whose reality is often hidden. The documentary traces the physical, mental and emotional effects of deportation on a young family. 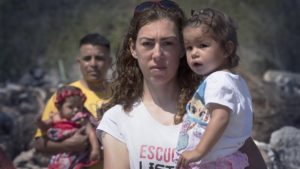