[Update: On March 20, 2018, in response to a lawsuit brought by the Jackson Women’s Health Center, a federal judge granted a restraining order that blocks Mississippi’s new law banning most abortions after 15 weeks from taking effect for 10 days. The center argued that because the new law bans abortions before a fetus is able to live outside the womb, it is unconstitutional. “The Supreme Court says every woman has a constitutional right to ‘personal privacy’ regarding her body,” U.S. District Judge Carlton Reeves said in his decision. “That right protects her choice ‘to have an abortion before viability.’ States cannot ‘prohibit any woman from making the ultimate decision’ to do so.” When the 10-day restraining order ends, “the court will decide whether to enter a preliminary injunction on the law, which would bar it from taking effect until the court has determined its constitutionality,” according to Mississippi Today.]

Mississippi Governor Phil Bryant on Monday signed into law a bill banning abortions after 15 weeks from the first day of the woman’s last menstrual period, with few exceptions.

It’s the most restrictive abortion law in the United States in terms of the number of weeks of pregnancy after which the procedure is prohibited. Its passage comes in a state that has long been a battleground in the raging culture war over abortion, and that already has some of the most limited abortion access in the country.

Mississippi has a “legal, important and legitimate interest in protecting unborn children,” Bryant, a Republican, said of signing House Bill 1510 into law. Bryant has previously stated that he wants Mississippi “to be the safest place in America for an unborn child.” The state currently ranks last in the U.S. for women’s and children’s health, according to rankings by the nonprofit United Health Foundation.

Passed 45 years after Roe v. Wade determined that women have a right to an abortion, the new law limits abortions after 15 weeks, even in cases of rape or incest. The only exceptions: If a doctor determines an abortion is necessary to preserve the life or “major bodily function” of the mother, or when a fetus is found to have a severe abnormality that means it would not survive outside the womb, “regardless of the provision of life-saving medical treatment.”

Physicians found to have knowingly violated the law could lose their license to practice medicine in the state.

Mississippi’s last remaining abortion clinic, Jackson Women’s Health Organization, has vowed to fight back in court — a battle that some anti-abortion activists say they would welcome.

The Mississippi law is just the latest state-level victory for abortion opponents, who for years have been spearheading campaigns in states throughout the country to pass laws that regulate and limit access to abortion. FRONTLINE went inside the success and strategy of that effort in the 2005 documentary, The Last Abortion Clinic — which focused in large part on Mississippi.

“My personal goal is to be instrumental in the overturn of Roe v. Wade and to be instrumental in ending abortion in my lifetime,” Terri Herring, then the president of Pro-Life Mississippi, told FRONTLINE in the film. Herring has continued to work as an anti-abortion activist and in February was pictured talking to lawmakers at the state capitol after the bill passed the Mississippi House.

As The Last Abortion Clinic explores, the anti-abortion movement has found incremental ways to chip away at abortion access that don’t hinge on reversing Roe v. Wade itself. “The assault on abortion rights is very clever. It’s very smart. And we are losing,” an anonymous abortion provider in the South told FRONTLINE in the film.

The documentary — which is available above — found that the anti-abortion movement’s success can be traced back to how it has seized on a critical 1992 Supreme Court ruling, Planned Parenthood v. Casey. While the Court upheld Roe v. Wade, it changed the standard by which abortion laws would be judged, allowing states to restrict access to abortion so long as they did not place an “undue burden” on women seeking the procedure.

“People got the impression that abortion was safe, Roe v. Wade was safe. All the pro-choice people went home,” William Saletan, author of Bearing Right: How Conservatives Won the Abortion War, told FRONTLINE.

But abortion opponents swung into action — lobbying state legislatures to pass bill after bill, looking to see where courts drew the line for what constitutes an undue burden, and then incrementally restricting abortion access within those evolving parameters.

“Their tactics changed,” Betty Thompson, the former director of the Jackson Women’s Health Organization, told FRONTLINE of the movement’s response to Casey. “They began to see, ‘We have political clout now. And so while we have this power, we’re going to chip away at Roe v. Wade until the law is going to be on the books, but nobody will be able to access the service.'”

The approach has been successful — both in Mississippi and in states across the nation, where hundreds of abortion regulations have been passed since the Casey decision.

“Sometimes I fantasize about Roe being overturned, because then I think that there would be this real threat, this real enemy,” the anonymous abortion clinic owner told FRONTLINE in the documentary. “As long as everything flies below the radar, never an all-out attack, I think that most women and men are asleep. I don’t think they realize what’s going on.”

Watch The Last Abortion Clinic — which was written, produced and directed by Raney Aronson-Rath, now FRONTLINE’s executive producer — above, and explore an in-depth case study on the documentary from the Columbia Journalism School and the Knight Foundation. 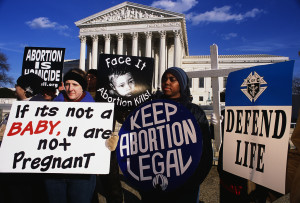