Colin Powell, pictured in a screengrab from a 2016 interview with FRONTLINE's Jim Gilmore.

Colin Powell — a former U.S. military general who became America’s first Black secretary of state — died Oct. 18 at age 84 of complications related to COVID-19, according to a statement released by his family the same day. Powell had reportedly undergone treatment for a blood cancer called multiple myeloma, leaving his immune system weakened.

Powell’s legacy on the national stage is long and complex, from a distinguished career in the U.S. Army, to serving as a national security advisor to President Ronald Reagan, to chairing the Joint Chiefs of Staff under President George H.W. Bush, to serving as secretary of state under George W. Bush.

Under the first President Bush, Powell played a key role in shaping the 1990-91 Gulf War in response to Iraqi President Saddam Hussein’s invasion of Kuwait.

“For those of us who were Vietnam veterans, we all have a view that says, ‘If you’re going to put us into something, then you owe the armed forces, you owe the American people, a clear statement of what political objective you’re trying to achieve,’” Powell told FRONTLINE in the 1996 documentary The Gulf War.

Bernard Trainor, co-author of the 1995 book The Generals’ War, said in The Gulf War that “The war, as it unfolded, was in keeping with [Powell’s] concept of what warfare should be, and the so-called ‘Powell Doctrine,’ with an objective in getting in very quickly with overwhelming force, if you have to use that force, but reluctant to use it. … but if you use it, use it in a big way and then pack your bags and come home. That’s exactly the way the war was fought because he was the major influence on the decision-making process… .”

“What we came to do, and what the U.N. authorized us to do, and what the American Congress authorized us to do, was to kick the Iraqi army out of Kuwait, restore the legitimate government of Kuwait, bring about a new relationship in the region and please try to do it with minimum loss of life,” Powell told FRONTLINE in an interview for The Gulf War. “All of that was accomplished.”

In the same interview, Powell told FRONTLINE, “Saddam Hussein is an anachronism, he will pass in due course, and then we will see what will rise in Mesopotamia to replace him.”

Hussein remained in power. Powell went on to serve as secretary of state during the George W. Bush administration, which became focused on what Bush termed the “war on terror,” following the worst terror attack on the U.S. in the country’s history. Amid Vice President Dick Cheney and Secretary of Defense Donald Rumsfeld’s push to go to war in Iraq after the Sept. 11, 2001, attacks, Powell, the country’s top diplomat, had expressed caution, later telling FRONTLINE he warned President Bush in 2002 that “if you break it, you own it” and urged him to seek a diplomatic solution.

“I just laid it out for him,” Powell told FRONTLINE in a 2016 interview. “I said: ‘Mr. President, it isn’t just a simple matter of going to Baghdad. I know how to do that. What happens after? You need to understand, if you take out a government, take out a regime, guess who becomes the government and regime and is responsible for the country? You are. So if you break it, you own it.’”

What happened in the subsequent months was detailed in the September 2021 FRONTLINE documentary America After 9/11: President George W. Bush chose Powell to make the administration’s case for war before the United Nations in a February 2003 speech, relying on Powell’s formidable reputation.

“He had ratings like Mother Teresa,” Lawrence Wilkerson, then Powell’s chief of staff, said of Powell in America After 9/11. “We used to talk about that: ‘Who’s going to be top tomorrow, Mother Teresa or you?’ And he’d laugh. But he did. The American people trusted him.”

When FRONTLINE asked Powell in 2016 why Bush chose him to make the case for military action to the United Nations, Powell said: “I’m the secretary of state. Who else would you send? You can’t send the secretary of defense to the U.N. The U.N. ambassador, this is a little above that pay grade. And so he selected me, and I think he thought I had credibility to deliver a speech and it would be believable.”

On Feb. 5, 2003, before the U.N. Security Council, Powell presented intelligence that Iraq’s government possessed ties to Al Qaeda and weapons of mass destruction, including evidence that was later revealed to be “a complete fabrication,” Wilkerson told FRONTLINE.

“I was a salesman that day to present a product,” Powell told FRONTLINE in 2016. “But the product was something that came out of the intelligence community.”

As America After 9/11 went on to explore, weapons of mass destruction were never found in Iraq following the U.S.-led invasion of the country in March 2003. The Bush administration’s most trusted figure had been wrong.

“Suddenly, the CIA started to let us know that the case was falling apart — parts of the case were falling apart,” Powell told FRONTLINE in 2016. “And it was deeply disturbing to me and to the president. To all of us.”

Powell ultimately would describe his speech before the U.N. as an enduring “blot” on his record. The war in Iraq ousted Saddam Hussein, but would ultimately have devastating consequences inside the country and across multiple U.S. presidencies.

Powell figured prominently in other FRONTLINE documentaries, including 2006’s The Dark Side, a 4.5-hour telling of Cheney’s determination to bring the war on terror to Iraq, Cheney’s battle with Director of Central Intelligence George Tenet, and Powell’s role within the administration and in the runup to the invasion of Iraq.

“Colin Powell was the most powerful voice within the administration cautioning against the dangers of going to war and the costs­ — human, political, diplomatic,” Robin Wright, then of The Washington Post, said in the film. “At the end of the day, however, Colin Powell is a team player. He wasn’t going to walk away from the administration on the eve of going to war, which was not only abandoning his commander-in-chief, but also the troops, many of which he still knew.”

And the two-part 2008 documentary Bush’s War detailed how Powell’s focus in the wake of 9/11 — building international coalitions in support of targeting Al Qaeda and its leader Osama bin Laden — differed from the approaches of Cheney, Rumsfeld and others in the administration, who were intent on expanding the “war on terror” to Iraq. The film also recounted Powell’s opposition to the Bush administration’s decision to categorize terror detainees as not subject to the Geneva Convention.

“Secretary Powell’s view was that if we were to depart from the Geneva Conventions, we would be exposing our troops, perhaps in this conflict but perhaps in future conflicts, to the possibility that they would be deprived of the benefits of the convention if they were captured by the enemy, and we had never done that,” William Howard Taft IV, legal advisor to the secretary of state from 2001 to 2005, said in the film.

The Gulf War, among other documentaries involving Powell, is no longer streaming, but you can read transcripts of the two-part film here and here, as well as Powell’s interview for the film, and explore 2006’s The Dark Side and 2008’s Bush’s War. For more context, read a 2002 interview in which Powell described the process of putting together an international coalition to fight terrorism after Sept. 11, and a 2016 interview in which he discussed his U.N. speech. And stream America After 9/11 and other FRONTLINE documentaries illuminating Powell’s legacy below.

From Michael Kirk, Mike Wiser, Philip Bennett, Jim Gilmore and Gabrielle Schonder, an examination of how the U.S. response to Sept. 11 — including Powell’s role — changed the country and the world over the next two decades.

In Powell’s 2003 speech before the U.N., he repeatedly mentioned Abu Musab al-Zarqawi, purporting the then-relatively unknown radical jihadist to be a key connection between Osama bin Laden and Saddam Hussein. As this documentary from Kirk, Gilmore and Wiser recounts, Powell’s U.N. speech helped elevate Zarqawi’s status, and within months, Zarqawi was rapidly gaining followers in Iraq, fomenting sectarian warfare and laying the groundwork for the organization that would become ISIS.

Martin Smith and Marcela Gaviria traced the roots of the 2003 U.S.-led invasion of Iraq back to the days immediately following 9/11, probing the fierce internal debate between the Pentagon and the State Department over intelligence purportedly justifying the war and over what a post-Saddam Iraq would look like. The film also detailed Powell’s presentation of the administration’s case to the U.N. 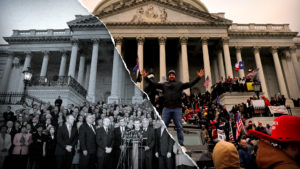