EXCLUSIVE: Before Flint’s Water Crisis, One Man Warned That “People Are Gonna Die”

After the state of Michigan switched Flint’s water supply in April 2014, thousands of children were poisoned by lead and at least a dozen adults died from one of the largest outbreaks of Legionnaires’ disease in U.S. history.

It was exactly the sort of outcome that Matt McFarland, the operations supervisor at the water treatment plant, had tried to sound the alarm about, a new FRONTLINE documentary exclusively reveals.

“I remember specifically, the day before they actually flipped the switch, he called me and he said, ‘Tonja, contact everyone that you know in Flint, anybody you care about, and tell them, do not drink the water,’” Tonja Petrella, his sister, told FRONTLINE.

McFarland passed away in 2016. But in an exclusive interview for the upcoming FRONTLINE investigation Flint’s Deadly Water, Petrella spoke publicly for the first time about the concerns her brother shared in the run-up to the water switch.

“He would call me and he would just be so upset … I mean, he knew that they weren’t ready for this,” Petrella says in the above excerpt from the FRONTLINE film, which premieres Tuesday, Sept. 10.

Her account sheds new light on what was happening inside the treatment plant just before the Flint water crisis began. Flint, one of the poorest cities in America, had been buying its drinking water from Detroit for decades. In 2013, the state, which was overseeing Flint’s finances because of its severe budget deficit, approved a plan to join a new water pipeline, an option projected to be cheaper than continuing to purchase water from Detroit.

But the pipeline had to be built first. The state decided that while the pipeline was being built, Flint would temporarily get its water from the Flint River. That meant the city would need to quickly reactivate its old water treatment plant, which had barely been used for nearly half a century.

McFarland was concerned. As the state’s deadline approached, he regularly confided in Petrella about his fears — that the plant wasn’t ready to put out water from the Flint River, that it wasn’t fully staffed, and that the consequences could be dire.

So, with the plant’s opening just hours away, at her brother’s behest, Petrella began texting friends that the water wasn’t safe. She shared those messages with FRONTLINE: 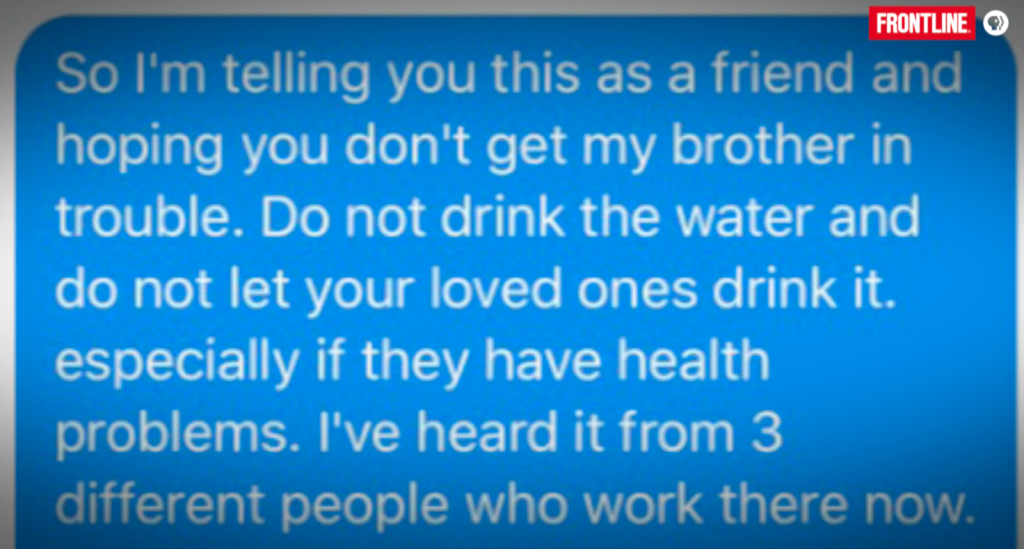 McFarland had also expressed his concerns to his supervisors. One of them, Mike Glasgow, had concerns too. In an email, Glasgow told state regulators that if the plant were to open on schedule, “It will be against my direction.” Glasgow later told investigators he never received a response.

McFarland’s warning is just one of the new revelations in Flint’s Deadly Water, which uncovers the roots and extent of a deadly Legionnaires’ disease outbreak during the Flint water crisis — and reveals how officials failed to stop it.

From director Abby Ellis, reporters Kayla Ruble and Jacob Carah, and FRONTLINE senior editor Sarah Childress — all Michigan natives — the documentary has been two years in the making. Through exclusive interviews, a sweeping analysis of county death records, and thousands of pages of court documents, they found that government officials knew about the outbreak for over a year before alerting the public.

FRONTLINE’s team also found that the death toll from the outbreak of Legionnaires’ disease, a severe form of pneumonia that is treatable if properly identified, likely rose to numbers far higher than the 12 officially recorded fatalities. By obtaining and analyzing seven years of county death records, FRONTLINE identified a spike in deaths attributed to standard pneumonia during the water crisis — deaths that may have actually been caused by Legionnaires’. Additionally, at least 20 confirmed Legionnaires’ patients later died of causes commonly linked to Legionnaires’ disease, FRONTLINE has found.

For the full story, watch Flint’s Deadly Water on FRONTLINE. It’s a comprehensive, richly detailed investigation that expands public understanding of the Flint water crisis, and asks whether anyone will ever be held accountable.