Winnie Madikizela-Mandela, the South African anti-apartheid activist who was married to Nelson Mandela for nearly four decades, died in Johannesburg at age 81 on Monday after what her spokesman called a long illness.

A complicated figure who was hailed for opposing the apartheid system and supporting her husband in pushing for a free and democratic South Africa during his 27-year imprisonment, Madikizela-Mandela herself was imprisoned during the apartheid, held in solitary confinement, beaten and put under house arrest.

But she was also criticized for making comments that were seen as sparking violence, and in 1991 — the year after Mandela’s release from prison — she was found guilty on assault and kidnapping charges in connection to the murder of a 14-year-old boy named Stompie Seipei by one of her bodyguards. She and Mandela separated before he was inaugurated as the first black president of South Africa in 1994, and they divorced in 1996. She would go on to serve on South Africa’s parliament, and was still in office at the time of her death.

FRONTLINE’s classic 1999 documentary on Nelson Mandela’s life, The Long Walk of Nelson Mandela, traces Madikizela-Mandela’s relationship with her husband and her role in bolstering the anti-apartheid cause.

“Winnie always wanted to be understood … She wanted to be accepted for herself,” the late anti-apartheid activist Fatima Meer told FRONTLINE about her friend. “She was a very strong personality all along.”

When Mandela was imprisoned on Robben Island, Madikizela-Mandela was left alone with their two children. She made 1,000-mile journeys to visit her husband for just 30 minutes, the maximum prison officials would allow. He documented those visits in poetic letters, as he sharpened an approach to politics and social change that would one day transform South Africa’s government. The above excerpt from The Long Walk of Nelson Mandela recounts those visits. It also traces how Madikizela-Mandela emerged as a leader in her own right — and how, years into his imprisonment, she reignited her husband’s international image.

In 1977, Madikizela-Mandela was banished with her younger daughter to a remote country town, Brandfort — and found herself at the center of a media firestorm that she would use to spotlight Mandela’s cause, reminding the international community about both his ongoing imprisonment and his enduring dream for the country he loved.

“For one thing, the security police and the dirty tricks operators kept attacking her, and they burnt her clinic and all sorts of things,” the late journalist Allister Sparks told FRONTLINE. “It suddenly became a very attractive story. Everybody started flocking to Brandfort, and Winnie then got on TV, foreign TV, and she was a celebrity in no time at all.”

Foreign dignitaries visited her, including then Democratic Senator Ted Kennedy, who said she was “a source of inspiration for people all over the world.” It all added up to a media event, Sparks said, that “did as much as anything” to rekindle international interest in Mandela.

“She reawakened dramatically the name of Mandela, and she spoke in his name,” Sparks said.

That’s evident in a TV interview from the period that appears in the above clip.

“Led by?” the reporter asks.

For more on the complex life of Winnie Madikizela-Mandela, watch The Long Walk of Nelson Mandela in full. 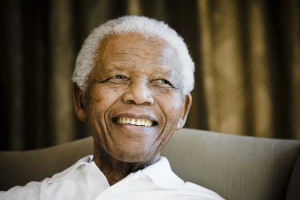 The Long Walk of Nelson Mandela