As World Health Organization officials publicly praised China in the critical early weeks of the outbreak of what would come to be known as COVID-19, they privately expressed concern about the government’s lack of transparency and worried that the WHO would be accused of failing to warn the world.

The revelation comes in leaked recordings obtained by the Associated Press and shared with FRONTLINE that are heard in the upcoming FRONTLINE documentary China’s COVID Secrets, a coproduction with the BBC.

“We’ve all been, or some of us, we’ve been here before, in 2003 [during the SARS outbreak],” Dr. Michael Ryan, who was overseeing the WHO’s response to the emerging outbreak, says in a leaked recording from early January 2020. “This is exactly the same scenario. Endlessly trying to get updates from China. … The danger now, despite our good intent … especially if something happens … there will be a lot of finger-pointing.”

“Those concerns are not something they ever aired publicly,” Dake Kang, an AP reporter, says in the film. “Instead, they basically deferred to China.”

At the time of the recorded meetings, the WHO was receiving some crucial information from the media rather than from the Chinese government, which initially said the new disease was viral pneumonia. Kang says a pivotal moment came when the WHO heard The Wall Street Journal was going to report that Chinese authorities believed they had identified a novel coronavirus. In one of the recordings, Ryan expresses frustration around China’s claim that there was no clear evidence of human-to-human transmission.

“‘There’s been no evidence of human-to-human transmission’ is not good enough,” Ryan said in the recordings. “We need to see the data; we need to be able to determine for ourselves the geographic distribution, the timeline of the epi curve, and all of that. It’s absolutely important, at this point.”

Soon after, as the film reports, a WHO representative appeared on Chinese state television and praised “the sheer speed of the response in China,” saying, “we can see that there is no clear evidence of sustained human-to-human transmission.”

“Ultimately, the impression that the rest of the world got was just what the Chinese authorities wanted,” AP reporter Dake Kang says in the film. “Which is that everything was under control, which of course it wasn’t.”

China’s government didn’t confirm human-to-human transmission of COVID-19 until Jan. 20, 2020. By then, the virus had already begun to spread beyond China’s borders. To this day, the Chinese government says it has acted “in a timely manner” and with “openness, transparency and responsibility” in the fight against COVID-19.

China’s COVID Secrets is available to stream in FRONTLINE’s online collection of documentaries, on our YouTube channel, in the PBS Video App and below. 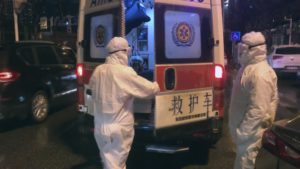