Inside the Making of “Terror in Little Saigon”

Thirty years ago, a former naval officer for the South Vietnamese Navy tried to restart the Vietnam War with a guerrilla army based in a Thailand jungle. He rallied support and raised money for those efforts in America. Eventually, his group would be linked to an alleged death squad on U.S. soil that silenced journalists who either were critical of its mission, or voiced pro-communist views.

It might sound like the stuff of Cold War fiction. But when A.C. Thompson and Richard Rowley began looking into the unsolved 1981-1990 murders of five Vietnamese-American journalists in cities across the U.S., it’s exactly the scenario that began to emerge.

All of the murdered journalists had worked for small-circulation Vietnamese-language publications serving the refugee population that sought shelter in the U.S. after the fall of Saigon in 1975 — and many of those publications had criticized an anti-Communist paramilitary organization called the National United Front for the Liberation of Vietnam, or, “The Front,” whose ultimate goal was to reconquer Vietnam.

Thompson and Rowley’s search for answers about the murders and the Front took them from American cities like Houston and San Francisco, to the jungles of Southeast Asia, to the corridors of power in Washington — and it’s all laid out in Terror in Little Saigon, FRONTLINE and ProPublica’s newest multiplatform collaboration.

FRONTLINE sat down with Thompson and Rowley to talk about why they felt a responsibility to explore this untold story and what surprised them most along the way.

As Terror in Little Saigon makes clear, there was very little mainstream media coverage of these murders and attacks when they first happened. How did the two of you come across this story in the first place?

Thompson: A few years ago, when I was doing a series of stories about the murder of an Oakland journalist named Chauncey Bailey, I met a Vietnamese-American filmmaker named Tony Nguyen. He told me, ‘Hey, this actually happened in the Vietnamese community, over and over and over again, and nobody really noticed outside of that community.’

I couldn’t get that out of my head. I started digging into these cases and building on Tony’s reporting — he had made a film about one of these attacks earlier, and he came on board as an associate producer. And then, in a huge stroke of luck, I somehow corralled Rick into getting involved. I had wanted to work with him for many years.

Rowley: I remember A.C.’s first email to me — it was along the lines of, “This might sound a little bit far-fetched, but I want to talk to you about a story about a death squad operating in America in the 1980s.” I was immediately intrigued by what an amazing story this was, and shocked by just how untold it was.

I mean, this was a death squad operating with near-impunity on American soil that may have killed five journalists and committed dozens of other acts of violence over the course of a decade, and we know nothing about it?

Thompson: That was exactly the appeal of it. There had been very little reporting done on these attacks, and only a few journalists had really pieced together the fact that they were interconnected. We wanted to try to understand what happened and to hold people accountable, and one of the groups we’re holding accountable is ourselves — the English-language, mainstream media.

What surprised you the most as your investigation got under way?

Thompson: This project was one surprise after another. But one thing that was definitely surprising was the fact that the local police departments we approached really didn’t want to talk. It’s the opposite of what you usually see in a cold case — they didn’t want attention.

Rowley: Almost every interview we filmed held surprises for me. It’s not like there was a pre-existing print piece, and we were going back and illustrating it with a few key interviews. There were real stakes here. Revelations were unfolding in real time and happening on camera — people who had never sat down in front of a camera before were talking about these events for the first time. I think you feel that, throughout the film — that you’re experiencing these revelations at the same time we are.

Your Freedom of Information Act requests yielded thousands of pages of new documents on the group known as the Front. How did what those documents revealed about the group’s relationship with the U.S. government change the scope of your investigation?

Rowley: Every level we explored opened up bigger and bigger worlds.

Thompson: When we started looking at this paramilitary group suspected of killing its critics here in the U.S. and found that it was connected to a group that actually tried to start a war and invade Vietnam on multiple occasions — yet no one had ever been apprehended or held accountable — the obvious question that we had to ask, and that any viewer would ask, was, “Hey, is the U.S. government somewhere in the background here?” We found that the more we looked, the murkier it got.

Rowley: Yes, it’s incredibly difficult to pin everything down. But what’s absolutely clear is that this was not just a “normal” criminal syndicate that’s killing people. Here’s a group formed by former officers in the U.S.-backed army of South Vietnam, running a militia that’s based on the border of Thailand and Laos and trying to retake Vietnam. This was a political organization — a guerrilla army that’s part of a constellation of groups on America’s side of the cold war.

Thompson: And the U.S. government was aware of their existence, at multiple levels. The documents we found showed a connection between [Front commander] Hoang Co Minh in Thailand and Richard Armitage, the former assistant secretary of defense. We know that the Pentagon asked for Hoang Co Minh’s naturalization to be expedited. We know that the CIA and the National Security Council were aware of these folks, and that the State Department and FBI were aware that they were on the ground in Southeast Asia. Yet no one ever seems to have said, “Hey, you know, this isn’t really a great look for us to have a militia led by a U.S. citizen trying to start a war with a country that we’re no longer at war with.”

Speaking of which, as the investigation progressed, did you ever worry for your own safety?

Rowley: In making this investigation, A.C. and I weren’t really the ones who took the risks.

Thompson: Yeah, I think the bigger concern we had was that people would jeopardize themselves by talking to us. We had lot of support from Vietnamese-American community members and journalists who wanted the story told, but were fearful of putting their name out there and being associated with it. It was remarkable — they would say, “Look, I’m an old man, and I want to die a peaceful death, so I don’t want to talk about what I know publicly.”

Did you encounter any pushback along the lines of, “This was 30 years ago — why focus on this negative chapter of the Vietnamese-American community’s history now?”

Thompson: We did — and you know, at a certain level, I can understand that sentiment. There was a whole wave of stories about the Vietnamese-American populace in the 1980s that was like, “Look at these crazy folks! There’s all these gang problems and organized crime and so forth.” In a lot of ways, the community felt really bruised by all these sensational newspaper headlines and TV clips at the time. So I can understand, to a certain extent, when people say, “This is really a grim moment in our community’s history, and now you’re going back and shining a spotlight on it, rather than all the successes of the community.”

Ultimately, the feeling we got from a lot of folks we talked to was, “Look, people came to the U.S. because they were terrified — and then the terror got worse when they got here.” That chapter shouldn’t have happened. It was never actually resolved. And it was a story worth telling.

When your investigation is fully out there in the world, how do you hope the public will respond?

Thompson: I hope the general public will feel the passion of these murdered journalists, and the deep and inspiring intensity that they brought to their work.

I hope that people in the Vietnamese-American community with information on what happened in these incidents will come forward to share it — whether with us, with other reporters, with law enforcement, or with the families of the victims. I hope people who were terrorized in those days in Little Saigons across America come forward to say, “What happened to me was wrong. It shouldn’t have happened, and it shouldn’t happen again.”

Rowley: You know, Dam Phong knew the Front was coming. He had been getting threats for months, but he continued on. Because to him, what he was reporting was worth risking his life for. He thought that if the Front killed him because of what he’d been writing about their activities and their base in Thailand, other journalists would flock to the story, and his work and his life would not have been wasted.

But that isn’t what happened. No one came to pick up the thread of his reporting. He was basically forgotten, while former members of the Front remained prominent members of the community.

It’s 30 years late, but I hope that, with this investigation, we’ve continued and built on the dropped thread of reporting that brave journalists like Dam Phong started. Because we all hope that when we take risks in our work, they will be made worth it by the people who pick up our threads when we’re gone. 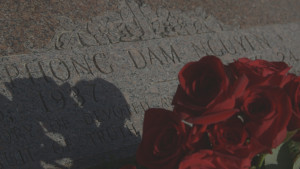