A screengrab from the FRONTLINE documentary 'Trump's American Carnage,' which examined the road to the Jan. 6, 2021, attack on the U.S. Capitol.

How and why did the insurrection happen, and how have American politics been impacted in the two years since?

Explore the FRONTLINE documentaries collected below for context.

From Michael Kirk and his team, this two-hour documentary from September 2022 investigated how American political leaders fed the public lies about the 2020 presidential election and embraced rhetoric that led to political violence — and how decisions made in the aftermath of the Capitol attack contributed to the threat to U.S. democracy.

An investigation of how the myth about widespread election fraud made its way to the center of American politics. From FRONTLINE and ProPublica, this March 2022 documentary by Samuel Black and A.C. Thompson traced how a handful of people had an outsized impact on the American crisis of democratic legitimacy.

An October 2022 collaborative documentary with the Associated Press, this investigation revealed how the retired three-star general emerged as a leader in a far-right movement that seeks to put its brand of Christianity at the center of American civic life and institutions and has attracted election deniers, conspiracists and extremists from around the country. From a team led by filmmaker Rick Rowley and AP reporter Michelle R. Smith.

An investigation of how the threat of far-right extremist groups evolved from the deadly 2017 white supremacist Charlottesville rally, to the assault on the U.S. Capitol, to 2022. From a team led by Rick Rowley and A.C. Thompson, the documentary, updated in January 2022, is a collaboration with ProPublica and Berkeley Journalism’s Investigative Reporting Program, with support from the WNET Group’s Exploring Hate initiative.

How trafficking in conspiracy theories went from the fringes of U.S. politics into the White House — aided by an alliance among former President Trump, his longtime advisor Roger Stone and conspiracy theorist Alex Jones. From Michael Kirk and his team, the documentary was updated in January 2022.

Made in the weeks following the attack on the Capitol, this documentary from Michael Kirk and his team examined the road to Jan. 6, how Trump stoked division, violence and insurrection, and how the leaders of his own party ignored the warning signs of what was to come.

A 90-minute examination of how the first woman speaker of the U.S. House of Representatives wielded power across three decades — and how she became a polarizing figure and a target of rioters on Jan. 6, 2021. This March 2022 documentary is from filmmaker Michael Kirk and his team.

Premiering in November 2020, this post-election special from a team led by Mike Shum and Blair Woodbury explored the lives, fears and hopes of Americans in the chaotic months leading up to the historic 2020 presidential contest — following people around the country as they dealt with COVID-19 in their communities, responded to George Floyd’s killing and experienced a polarizing election and its aftermath.

With Columbia Journalism Investigations and reporters from the USA Today Network, this October 2020 documentary from Jelani Cobb, June Cross and Tom Jennings traced how unfounded claims of extensive voter fraud entered the political mainstream in the U.S.

This four-hour January 2020 documentary series from Michael Kirk and his team investigated how the country’s increasingly bitter, divided and toxic politics came to be and examined what America’s polarization could mean for its future.

These and hundreds of additional FRONTLINE documentaries on domestic and international issues are available to stream on our website, in the PBS Video App and on FRONTLINE’s YouTube channel. 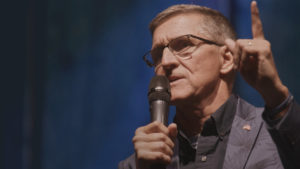 Laurent Richard and Sandrine Rigaud of Forbidden Stories spoke with FRONTLINE about investigating Pegasus, the powerful spyware sold to governments around the world by the Israeli company NSO Group, and measures they took to protect themselves.
January 3, 2023

She Investigated Government Corruption. She Became a Pegasus Spyware Target.