On a hot, dusty day this past fall, producer Bianca Giaever and reporter Roopa Gogineni arrived at Dadaab Refugee Camp in Kenya, home to some 220,000 displaced people. They would spend over a week in the area, reporting and recording for a special episode of The FRONTLINE Dispatch that explores what life is like for refugee kids — and that’s meant to be listened to by both adults and the children in their lives.

Like most reporters would, Giaever and Gogineni arrived with questions in hand. But their questions were from a unique source: American schoolkids in Giaever’s New York City borough, who had shared with her what they wanted to know about their counterparts in Dadaab — everything from, “Are there dentists?” to “What would a typical day be like for you?” to “What do you want to do when you grow up?”

In “Muzamil’s Day,” an episode of The FRONTLINE Dispatch that was produced in collaboration with Firelight Media, listeners can learn about the answers through the lives of kids living in Dadaab — kids like 12-year-old Muzamil, who is nicknamed “Big Ears,” loves soccer and studying, and dreams of one day being a teacher in his native Somalia.

In the below photos, taken and captioned by Gogineni (a FRONTLINE/Firelight Fellow), meet Muzamil and other kids and families, and see scenes from the camp they call home.

12-year-old Muzamil drinks tea in the morning while sitting in his kitchen.

Muzamil poses with his soccer team, “The New Stars.”

A herd of goats passes in front of Muzamil’s soccer match. The communities surrounding the camp are largely pastoral and keep herds of goats, sheep and camels.

When it’s too hot to play soccer outside, Muzamil and his friends head to the market to play virtual soccer at the PlayStation center. There’s limited electricity within the camp, but some businesses are powered by generators.

The outer wall of the Midnimo Ice Plant restaurant in Dadaab, so-called because it’s located next to an ice plant. In Dadaab, restaurants are called hotels. Many businesses advertise their products, services or menus by painting what’s on offer.

17-year-old Nimco was born in the refugee camp. Here, she prepares for a recording session with The FRONTLINE Dispatch. She’s about to start high school, where she’ll work towards getting a scholarship to attend college outside of the camp. She hopes to become a journalist one day.

Five-year-old Mohamed and 4-year-old Siyam were born in the camp and are about to repatriate to Somalia. Their mother bought them new clothes for the occasion.

Bags of a grain, cooking oil and salt are separated into piles during a food distribution for pregnant women and new mothers.

A fence made from repurposed vegetable oil tins, donated by the U.S. government, surrounds a house in the refugee camp.

Over the years, the presence of hundreds of thousands of refugees in Dadaab has drastically altered the surrounding environment. Refugees rely on wood and charcoal to cook meals, leading to widespread deforestation.

Many refugees living in the camp buy food on credit. This family, about to repatriate to Somalia, counts cash to slip through the barbed wire fence to pay a debt collector.

The Kenyan government has repeatedly threatened to close Dadaab, and refugee resettlement from the camp has slowed to a trickle. Facing this reality, many refugees have decided to return to Somalia through a repatriation program. These two girls head to the plane that will take them to Somalia. For most, it’s their first time flying.

Having relinquished their refugee status, a group of Somalis waits to board a plane bound for Kismayo, Somalia.

Nearly 80,000 refugees have left the camp and returned to Somalia since 2014. Those who choose to leave are given $200 and assisted with food and shelter upon arrival. This family waits to collect their money before boarding a flight to Kismayo, Somalia.

Marabou storks on the outskirts of the refugee camp.

Maryama Muhumed said she and her family had been conditionally approved for resettlement in the United States when President Trump took office. Her disabled son, Abdifatah, was referred for treatment in the U.S., but their resettlement process stalled, and he died waiting, she said. Maryama carefully stores all of their documents in a bag, hoping the U.S. resettlement program will recommence.

Gabrielle Berbey contributed to this story. 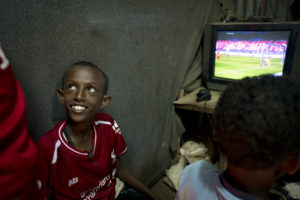 FRONTLINE and ProPublica investigate a neo-Nazi group that has actively recruited inside the U.S. military.