What Happened to Poverty in America in 2021

Volunteers fill boxes at the Food Bank for the Heartland distribution warehouse in Omaha, Nebraska, on Dec. 8, 2021. FRONTLINE has tracked how poverty affects American families with children across several years and films. (Dan Brouillette/Bloomberg via Getty Images)

When it comes to tracking how poverty impacts American families, and especially children, estimates for 2021 reveal something noteworthy.

Pandemic-era benefits may have helped drive poverty in 2021 lower than in 2020, according to researchers at Columbia University’s Center on Poverty & Social Policy and at the nonprofit Urban Institute. By one measure, last year was already a notable low, with the U.S. Census Bureau’s 2020 supplemental poverty rate — which factors in families’ expenses, as well as government assistance like stimulus checks — falling to its lowest since the estimate was first published, in 2009.

FRONTLINE has been documenting how poverty impacts families — and especially children — for several years, including in the documentaries Poor Kids (2017) and Growing Up Poor in America (2020).

The Census Bureau’s annual poverty figures for 2021 won’t be available until well into next year. While researchers estimated that poverty declined in 2021, they cautioned that the trend could be temporary, with many pandemic-era benefits ending. So where does that leave American families now?

Did Pandemic-Era Policies Affect Poverty in 2021?

Zachary Parolin has been leading the Columbia researchers’ monthly estimates of U.S. poverty since the start of the pandemic. According to the team’s data, the poverty rate in December 2020 — when many pandemic-related benefits had expired — was 16.1%. But when some benefits were renewed or extended in January 2021, the monthly poverty estimate declined to 13.2%.

“In fact, throughout the entire year of 2021, the poverty rate has been lower than that 16.1% that we saw in December 2020,” Parolin said. The Columbia team estimated that poverty in 2021 rose to a high of 14.3% in February and declined to 9.3% — its lowest level of the year — in March, when families received economic impact payments, as well as income tax and child tax credits.

“The last two years taken together have probably shown us more clearly than any time in recent history how much policy matters,” Megan Curran, a Columbia researcher said. The team’s research found that without the early pandemic aid provided by the March 2020 CARES Act, poverty rates could potentially have rivaled those during the Great Recession. She cited federal actions — economic impact payments (also known as stimulus checks), expanded unemployment insurance, increased food assistance and other measures — in averting a worst-case scenario.

The researchers also looked closely at the expanded child tax credit, put in place by Congress’ March 2021 American Rescue Plan. When the expanded credit went into effect in July, it raised benefits from $2,000 to $3,600 for children under 6 and to $3,000 for children ages 6 to 17. It reached families that didn’t earn enough income to owe taxes, and it was paid in monthly installments from July to December 2021, instead of all at once in 2022.

The Columbia researchers found that measure alone kept roughly 3.5 million children out of poverty in each month for which data is available.

“We haven’t seen these types of reductions in a long time,” Parolin said of the credit’s effect on childhood poverty, noting the persistently low poverty rates among children during the months the credit was available. (December 2021 is the last month eligible families will receive the payment, unless a version of the credit is renewed in the Build Back Better legislation currently facing hurdles in the Senate. With no Republican support, the legislation’s passage would rely on Sen. Joe Manchin, D-W.Va., who in the past has expressed reservations that the expanded child tax credit has no work requirement.)

Read more: How COVID Has Impacted Poverty in America

Researchers at the Urban Institute also examined the impacts of pandemic-era benefits and stimulus measures. Looking at 2021 as a whole, they projected government-assistance programs — both those that existed pre-COVID and those created in response to the pandemic — would reduce the 2021 poverty rate by 67%, compared to what it would have been with no government assistance, and would keep nearly 50 million Americans out of poverty over the course of the year.

“What we observed were some of the largest short-term reductions in poverty that we’ve seen,” said Ilham Dehry, a co-author of the Urban Institute report. Their projections showed stimulus checks having the largest antipoverty impact, keeping 12.4 million people from falling into poverty in 2021. That echoes the Census Bureau’s findings for 2020, when stimulus checks kept 11.7 million people out of poverty.

The Urban Institute projected that benefits — both pre-COVID and pandemic-era — would reduce poverty among children by 81% in 2021, compared to without benefits. Their projections showed a lower poverty rate for children than for all adults and those over 65 — a seeming reversal of a trend over the last decade, when the poverty rate for children has been higher than for other age groups. Dehry said the 2021 reductions in child poverty “might reflect the targeted nature of some of the aid,” such as the expanded child tax credit and per-child stimulus payments for families.

Some economists have argued that extending the expanded child tax credit “will serve as a disincentive to work” and, with parents leaving the workforce, that it would blunt the poverty-reduction effects of the credit.

Gregory Acs, vice president for income and benefits policy at the Urban Institute, said extending the expanded child tax credit would allow researchers to learn more about how it shapes people’s behavior, including whether it leads adults to work less or to spend more time with their children.

“Reducing child poverty has the potential to have profound intergenerational benefits,” Acs said. “If kids are not poor, if households are not stressed by poverty, then they’re more likely to … do better in school, get more education and be on a better path forward as adults.”

What Happened to Food Hardship?

In December 2020, Joseph Llobrera, director of research on food assistance at the Center on Budget and Policy Priorities, described food hardship — or families not getting enough to eat — as “off the charts”: 18.3% among households with children, according to data he analyzed from the Census Bureau’s Household Pulse Survey.

The U.S. Department of Agriculture also showed food hardship increasing in 2020 for families with children, and for Black and Hispanic families, although the percent of food insecure households in 2020 remained the same as in 2019: 10.5%. Data from a survey sponsored by the USDA also showed that 2.3% more households reported using food pantries in 2020 as compared to a year earlier.

Read more: “I Don’t Want to Live Like This Forever”: A 14-Year-Old’s Story of “Hidden Homelessness” Amid the Coronavirus Pandemic

To counteract the pandemic’s impact, the federal government expanded food assistance in several ways. Families eligible for Supplemental Nutrition Assistance Program (SNAP) could receive supplemental emergency allotments. An EBT program launched in March 2020 allowed the families of kids who usually would get free or reduced-price lunches at school to receive temporary benefits to purchase food. SNAP benefits increased 15% from January through September 2021. Then a long-planned modernization of SNAP benefits kicked in in October, raising benefits 27% compared to without pandemic-era increases.

Llobrera found that overall food hardship, as measured by the Household Pulse Survey, dropped between December 2020 and January 2021 then dropped again in mid-March 2021 and once again in mid-July — the latter coinciding with the rollout of the expanded child tax credit. At the same time, Llobrera said food hardship among households without children stayed flat or worsened.

After dropping to a low of 9.5% during the summer of 2021, the percent of households with children who didn’t get enough to eat crept back up to 11.8% by October, the most recent month for which data was available.

While Llobrera is still trying to understand the full impact of these programs, he said, “Even with the data that we have, it’s shown … overall poverty rates, food insecurity rates, those would be so much higher, and hardship would have been so much worse, had those resources not been made available to households that were impacted by the pandemic.”

What’s Happening Now — and What’s Next?

In recent months, the U.S. has seen rising inflation, as well as consumer prices in November reaching their largest 12-month increase since 1982.

Unless the benefits people receive are adjusted for inflation, their “antipoverty effects are going to be eroded,” said Acs of the Urban Institute.

Diane Whitmore Schanzenbach, director of Northwestern University’s Institute for Policy Research, has observed food-hardship rates creeping back up and said it could be partially attributed to rising food prices.

“Of course, low-income families have less slack in their budget. They spend a higher share of their total income on necessities,” she said. “So then, of course, when there are increases in prices of necessities, that harms them disproportionately.”

Read more: Catching Up With 2 of the Kids From ‘Poor Kids’

In addition, several of the pandemic-era measures that helped keep people out of poverty over the last two years were either finite (like the stimulus checks), have since expired (like expanded unemployment benefits and the 15% increase in SNAP benefits) or have no guarantee they will continue (like the expanded child tax credit).

“We basically see the fortunes of families sort of rise and fall with the timeline of when policies are in place and when they expire,” Columbia’s Curran said. “All of these income supports have just been so critical to keeping families afloat.”

The Columbia researchers predicted that, unless the expanded child tax credit is renewed, signs of increasing child poverty could start to show up in January 2022.

Acs said several factors could impact poverty overall in 2022. If employment goes up, poverty could go down. Or the end of pandemic-era programs could mean higher poverty, and if inflation continues to rise, poverty could be higher still.

“The crisis made us put all these things in place that many people have been calling for for a long time,” Curran said. “But I think it also showed us that when they were in place, they really worked. And so, I think the lesson that policymakers can take away from this is that we have the tools to keep poverty much lower than it has been for the past half a century,” she said.

“It’s just actually a question of: Are we willing to make this commitment on a more permanent basis?” 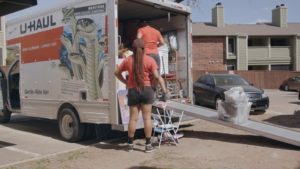