“The Toughest Battle I’ve Ever Covered”: A Q&A With “Mosul” Director Olivier Sarbil

When French journalist Olivier Sarbil was in the city of Sirte covering the Libyan revolution in 2011, he was seriously wounded by a rocket-propelled grenade, lost part of his right hand, and spent eight months in the hospital.

Even still, what he experienced while filming the battle to retake the Iraqi city of Mosul from ISIS, with thousands of civilians caught in the crossfire, was like nothing he’d ever encountered.

“You have to face snipers, drone attacks, suicide bombers — every day and every night,” says Sarbil, who embedded with an Iraqi special forces unit on the front lines of the street-by-street fight for six months during the nine-month offensive.

“Physically and mentally,” he says, “it was definitely the toughest battle I’ve ever covered.”

Mosul, the resulting documentary from Sarbil and producers James Jones and Dan Edge, premieres Wednesday, Oct. 18 on FRONTLINE. A qualifier for this year’s Documentary Short Subject Academy Awards following its theatrical release in Los Angeles this past summer, this vivid, haunting, and exquisitely shot film follows four young soldiers — Anmar, Hussein, Jamal and Amjad — as they face the reality of fighting an elusive and vicious enemy. Of the four soldiers, only three make it out alive.

Prior to Mosul’s television premiere, FRONTLINE spoke with Sarbil — a former French soldier — about building trust with the squad he was following, how he decided what risks to take and what it was like to film in the middle of a battle that’s been called the deadliest urban combat since World War II. This interview has been edited for clarity and length.

Take me back to the beginning – when and how did you first have the idea for this film? When did it start taking shape?

I first met Anmar, one of the young soldiers in the film, when I was covering the battle to retake Fallujah in 2016. When I left Iraq, we stayed in touch and I thought maybe there is a story to be done about Anmar and his men during the upcoming battle for Mosul.

To be with an assault squad on the frontline 24/7 — to eat with them, sleep with them and to follow them into combat every day, to get that kind of access — is extremely rare. It took determination, patience and respect. And actually, for me, it was never an official embed. I got that level of access through building a relationship with the commander of Anmar’s unit. It took time to get to know each other and to trust each other, and in the end he allowed me to stay as long as I wanted. When the Iraqi army would totally block access for the media, he would tell me, for example, to keep hiding with his men at the very front where the general would not see me.

As you followed them over the months of this grueling battle, what motivated the young soldiers whose stories are at the heart of this film?

They wanted to get rid of ISIS once and for all. Anmar and his men had been fighting ISIS since 2015 — in Ramadi, in Fallujah and now in Mosul, which was going to be the biggest battle of their lives.

How did you build their trust? Did you work with a fixer or a translator at all, or was it just you on the ground with your camera?

I didn’t work with a fixer or a translator, and I don’t speak Arabic. The film is truly an observational work. It was important for me to establish trust with the men and also to disappear into the background. I wanted them to forget that I was there. If I’d had a fixer or translator with me, it would have broken my connection with the characters. It would have also made me much more visible. Not speaking the same language as the people around me made me more aware of the space, and I really had to trust all of my other senses and follow my instinct.

“It was important for me to establish trust with the men and also to disappear into the background. I wanted them to forget that I was there.”

But another reason why it didn’t involve a fixer or translator was that Mosul was an extremely violent battle, and I didn’t have a timeline for this project. I didn’t know how long I was going to spend on each trip inside. I was with them on the very front line, deep inside the city, and pushing further and further — it’s a choice and a risk I could take for myself.

One of the interesting things about working alone is that it was only when I was back in London going through all the footage with a translator that I could finally understand what they were talking about. That was a really amazing moment.

Your film brings viewers inside a battle that’s been called the deadliest urban combat since World War II. Did you fear for your life as you were filming?

Of course. But the thing is, when I made the decision to cover this battle, the risk assessment was done before I got on the plane. Once I was there, I had to be disciplined, and just follow the soldiers. I trusted them, not only because they were experienced and well trained, but also because I knew them and I knew they were looking out for me.

I also had to trust my instinct. When the people I am following are being killed and wounded on a daily basis, there is no reason why I will be the only one who is spared. So I would listen to my gut, and when I felt it’s time to leave, then I would pack my gear and get out.

In some of the film’s most harrowing scenes, we see some of the other soldiers coming to terms with the death of Amjad, a young recruit whose wife is pregnant. How did his death impact the making of the film?

I was aware from the start, and throughout filming, that at any time, any of the guys I was following could be killed or injured. But it’s impossible to prepare for that. When it happened, of course it affected me emotionally. But I had to take a step back and do my job as a journalist so I just kept on filming. Usually, it hits me more when I leave the battlefield.

“I was aware from the start, and throughout filming, that at any time, any of the guys I was following could be killed or injured.”

The Iraqi army has a history of human rights abuses in Mosul, and some civilians fear the army almost as much as they fear ISIS. How did you see that playing out on the ground? Did you see these soldiers wrestling with, on the one hand, wanting to fight ISIS and take back their country, but also dealing with the fact that many ordinary Iraqis are fearful of them?

The Iraqi army has had some dark moments in the past in Mosul, and there were times where the civilian population were as afraid of the Iraqi troops are they were of ISIS. But the special forces soldiers that I was with were well trained, and on the whole I was pretty impressed by the way they dealt with the civilians. I hope people will watch the moments of interaction with civilians in the film and make a judgment for themselves.

You’ve served in the French military yourself, and you’ve filmed extensively in combat situations before. How did this time differ, and what stuck with you?

One of the things that’s stuck with me is how honest the soldiers were with us about their emotions. I was really surprised to hear them opening up and talking about their post-traumatic stress. I’ve covered a lot of conflicts as a journalist, but Mosul was by far the toughest battle I have ever been to. I’d never spent such an extended period of time on the very front line. You have to face snipers, drone attacks, suicide bombers – every day and every night. Physically and mentally, it was definitely the toughest battle I’ve ever covered.

Also, one of the hardest things for me was the isolation — being a one-man crew, completely on my own with soldiers who don’t speak the same language and I can’t really communicate with. The only thing I had to keep me company during the quiet moments were my podcasts.

The fight against ISIS is not over in Iraq, and hundreds of thousands of civilians are still displaced from Mosul. What did your experience making this film tell you about the battles still to come against the terror group?

Mosul was a big victory for Iraq, but the fight against ISIS is not over for Anmar and his remaining men. There are still areas which are under ISIS control. Also, the fall of Mosul did not destroy the ISIS ideology and that will be an ongoing battle in Iraq, and beyond.

What do you hope viewers will come away with after watching this film on FRONTLINE?

We wanted to treat the soldiers as people, just as we would with American troops. They live and they suffer just like us. I hope people will remember that the war against ISIS is a war that affects us all, and that this film is a story of Iraqi Muslims standing up for themselves to defeat an enemy of the West. But this is not a campaigning film … we wanted to show the many shades of grey. There are no heroes, and we are not trying to romanticize war. This is a complex issue that shouldn’t be reduced to a simplistic moral message. 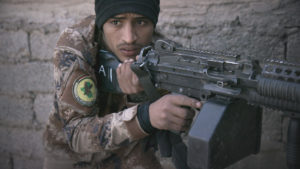