When Donald Trump took to the podium during his presidential inauguration last Friday, the speech he delivered touched on themes familiar to anyone who had attended his campaign rallies.

Just as he had during the campaign, the new president promised change, and spoke directly to the public’s fear and anger — at Washington, at the establishment, at trade deals, and at immigration.

“There is so much that scares Americans,” Republican pollster Frank Luntz says in the above excerpt from FRONTLINE’s new documentary, Trump’s Road to the White House. “And Donald Trump is the only politician who talked to those concerns and those fears. To his critics, it’s fear mongering. To his supporters, it’s truth telling.”

Drawing on new and revealing interviews with both Trump and Clinton campaign insiders, Trump’s Road to the White House examines how, despite historically high unfavorability ratings, Trump defeated his adversaries and rallied his supporters.

“Trump is a producer at heart. And when he did these rallies, he made sure that the staging was perfect,” Gabriel Sherman of New York magazine tells FRONTLINE in the above excerpt. “So we see the same elements that Trump applied in his hit TV show The Apprentice.”

Trump campaign pollster Tony Fabrizio says it was as much about Trump as it was the crowds.  “Those crowds at those rallies, they were tremendously energizing to him,” Fabrizio tells FRONTLINE, adding, “the crowd fed off of him, he fed off of the crowd.”

All the while, the former reality TV star kept his eye trained on the camera bank, according to Marc Fisher, co-author of Trump Revealed. A red light meant that networks were carrying Trump live, and, says Fisher, “He said that what he tried to do in those rallies was say whatever it took to keep the red light on.”

“It was every location. It was the same messages: ‘We’re tired of Washington lying to us,’” Trump’s former campaign manager Corey Lewandowski tells FRONTLINE. “The American people are angry, and they have a right to be. And what they see in Donald Trump is someone who’s willing to fight for them for a change.”

For more on how Trump rallied millions of supporters and defeated his adversaries — and what it suggests about how he will govern now that he’s in office — watch Trump’s Road to the White House, the newest documentary from Michael Kirk and his team. The documentary premieres Tuesday, Jan. 24 at 10 p.m. EST/9 p.m. CST on PBS (check your local station) and online. 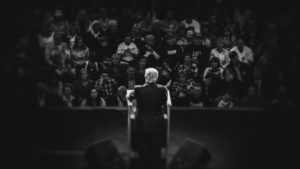 Trump's Road to the White House