WATCH: Inside an AA Meeting in Iran — A Country Where Alcohol Is Banned

In the Islamic Republic of Iran, alcohol is banned. But that doesn’t mean it can’t be found — if you call the right phone number.

That’s what a member of an Alcoholics Anonymous support group that meets in Tehran tells The New York Times’ Thomas Erdbrink, in a scene from the upcoming FRONTLINE series, Our Man in Tehran.

“You call someone who sells it and they come and deliver it to you,” the AA member tells Erdbrink, who has lived in and reported from Tehran since 2001. “They bring it in a paper bag, you pay them, and they’re off again.”

If they’re caught drinking, the consequences can be steep, another of the group’s members tells Erdbrink. “I was arrested and got 77 lashes,” he says in the above excerpt. “They use leather whips, just like with a horse. That’ll hurt, yeah. My skin was all torn apart.”

But while alcohol itself is banned in Iran, an American remedy for alcohol abuse isn’t. For use by Iranians attending AA meetings, the country’s Ministry of Information has given permission to print a book by AA co-founder Bill Wilson outlining the 12-step program.

And it’s working. One group member says he’s been sober for more than eight years; another, more than four.

This look inside an AA meeting in a country where alcohol is banned is just one of the surprising encounters that unfolds in Our Man in Tehran, a two-night, four-hour series that was filmed over four years starting in 2014. This television event gives American viewers an unprecedented look inside the closed society of Iran, as Erdbrink gets Iranians to reveal the intricacies of their private worlds — from following a young woman who decides to challenge the compulsory Islamic headscarf law, to meeting a volunteer soldier who has just come back from multiple tours in Iraq and Syria and talks about martyrdom with his wife and young children nearby.

Behind the personal stories, as tensions rise between the U.S. and Iran, Our Man in Tehran offers a serious look at whether Iran can open up to the world — and explores how its theocratic leaders’ harsh rhetoric against America often differs from the beliefs of ordinary Iranians.

“I wanted to show you an Iran different from the impression most Americans have from following the headlines,” says Erdbrink, one of the last Western journalists living in the country. “There is so much more to it than that.” 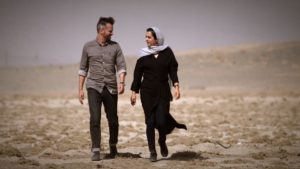