From criticizing President Donald Trump for congratulating Vladimir Putin on his re-election in March, to saying earlier this month that Trump’s comments about withdrawing from Syria “emboldened” Bashar al-Assad, Arizona Senator John McCain in recent weeks has continued to uphold his reputation as one of the Republican Party’s most vocal critics of the president.

But what was perhaps McCain’s most dramatic gesture of dissent against President Trump to date came at 1:30 a.m. on July 28, 2017.

In the opening scene from the new FRONTLINE documentary McCain, which traces the Republican Party’s evolution across McCain’s political career, and how President Trump came to see him as a foe, the six-term senator’s colleagues reveal new details from the night of his deciding vote against the GOP’s bill to repeal Obamacare.

McCain had been diagnosed with a deadly form of brain cancer just over a week before, and returned to Capitol Hill for the vote on what would have been the president’s first major legislative achievement.

“[Sen.] Lisa Murkowski (R-Ariz.) and I knew that he had reservations,” Sen. Susan Collins (R-Maine), a longtime colleague of McCain’s, tells FRONTLINE. “We were talking with him about the bill. And all of a sudden, he pointed to both of us and he said, ‘You know, you two are right.’”

Then, Collins says, she felt a tap on her shoulder. It was Vice President Mike Pence, who had come to pressure McCain to support the president.

“The vice president stood toe-to-toe with John McCain,” Sen. Angus King (I-Maine) tells FRONTLINE. “And he was in his space. It was very close. They went on for, I don’t know, it seemed like 15 or 20 minutes, back and forth, back and forth.”

Ultimately, King says, Pence turned on his heel and walked away. And then came McCain’s thumbs down vote — striking the crushing blow against a key campaign promise that had been made by a president who had criticized McCain’s Vietnam War record, called him a “dummy” and portrayed him as a symbol of the old Republican Party.

“One of the things I most admire about John McCain,” Collins tells FRONTLINE, “is he cannot be intimidated by anyone or anything.”

Building on FRONTLINE’s reporting last week in Trump’s Takeover on the battle for control of the GOP, McCain goes on to explore the Arizona senator’s complicated relationship with President Trump and his own Republican Party.

From Michael Kirk and his team, the documentary draws on both new reporting and FRONTLINE’s deep archive to explore McCain’s life and politics, and what they say about America today. The documentary includes a powerful look at McCain’s five-plus years as a prisoner of war in Vietnam, and how he went on to speak out against torture under the Bush administration. And, in an eye-opening sequence, the film examines how McCain’s choice of then-Alaska Governor Sarah Palin as his running mate in 2008 helped usher in an anti-establishment, anti-elite sentiment that continues to reverberate today under President Trump.

“I know the people around him regret it,” Matt Bai of Yahoo News tells FRONTLINE. “I would be very surprised if that didn’t haunt him from then after.” 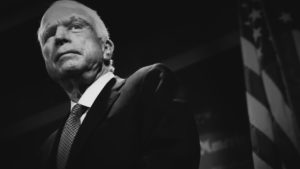