On Tuesday, Jan. 3, 2023, as a Republican majority is sworn into the U.S. House of Representatives, Nancy Pelosi (D-Calif.) will turn over her gavel as speaker of the house and exit her Democratic leadership position.

“For me, the hour has come for a new generation to lead the Democratic caucus that I so deeply respect,” said Pelosi, who will retain her seat as a U.S. representative, in November 2022. Her announcement followed both Democrats’ loss of House control in the midterm elections and an attack on her husband, Paul. “I’m grateful that so many are ready and willing to shoulder this awesome responsibility,” she said of her decision.

The FRONTLINE documentary Pelosi’s Power, which premiered on PBS and online in March 2022, examined Pelosi’s leadership over the years and how she shaped her party’s legislative agenda.

It was the first documentary on the powerful and polarizing politician who was first elected to the House in 1987 and became the first woman speaker in 2007 before reclaiming the role in 2019.

From veteran FRONTLINE filmmaker and chronicler of U.S. politics Michael Kirk and his team, the documentary traces Pelosi’s life and legacy, how she gained and wielded power across three decades, and how she navigated challenges to her leadership and to American democracy from former President Donald Trump and his allies.

The documentary draws on more than 30 in-depth interviews available to read and watch as part of FRONTLINE’s Transparency Project: with Pelosi’s family; her staffers, Congressional colleagues and fierce opponents; White House insiders; journalists and biographers who have chronicled her career; and Pelosi herself.

“Nancy Pelosi is more comfortable with power than any other person I’ve ever covered,” Susan Page, author of Madam Speaker, said in the film. “She grew up in a household where power was like electricity and running water. From the day she was born, she was in a family that was accustomed to seeking power, holding power and using power. And it’s in her bones.”

That approach would help make Pelosi “a remarkably rich target for the right wing,” author Rebecca Traister said in the documentary.

“She’s a no-holds-barred politician that was about partisan warfare 100% of the time,” former House Majority Leader Eric Cantor told FRONTLINE.

Pelosi’s Power shows how Pelosi faced off with Donald Trump over and over again throughout his presidency, including twice leading the effort to impeach him. In vivid scenes, the film traces how Pelosi responded on Jan. 6, 2021, after being targeted by the pro-Trump mob that attacked the Capitol.

The documentary also explored generational struggles over power within the Democratic party, including a challenge to Pelosi’s leadership in 2018 that was ultimately unsuccessful.

Stream Pelosi’s Power on FRONTLINE’s website, in the PBS App and on FRONTLINE’s YouTube channel, and explore more than 30 interviews from the making of the documentary, including with Pelosi herself, via FRONTLINE’s Transparency Project. 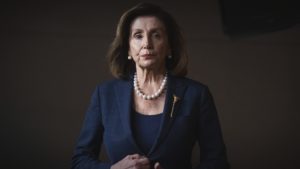