What Is a Safety-Net Hospital and Why Is It So Hard to Define?

Above, in a still image from the documentary "The Healthcare Divide," a team tends to a patient at Erlanger, a safety-net hospital in Chattanooga, Tenn.

Safety-net hospitals face a number of longstanding challenges thrown into the spotlight by COVID-19, from competition with wealthier hospitals to uneven government support.

But another challenge is even more basic: No universal definition of a safety-net hospital exists.

Because there’s no single definition for these institutions — the subject of The Healthcare Divide, a joint investigation between FRONTLINE and NPR premiering May 18 on PBS — the number of U.S. safety nets is also fluid. America’s Essential Hospitals, a trade group composed primarily of urban facilities with high levels of Medicaid and uninsured patients, counts 300 members. Other definitions put the number much higher.

Why the differences? And what do they mean for the low-income populations who tend to rely on these facilities? To begin to understand what qualifies as a safety net and how the lack of a common definition could impact patient care, FRONTLINE spoke to experts in public health, medicine and hospital administration.

What is a safety-net hospital?

Lots of hospitals consider themselves safety nets, but there’s no one definition. They can be rural or urban, public (like a county hospital) or nonprofit (like a university hospital). Almost all have a stated mission or mandate of serving a low-income population, regardless of patients’ insurance coverage, ability to pay or immigration status.

In practice, that means they won’t turn away patients who can’t pay. As a result, these hospitals usually have high numbers of uninsured and Medicaid patients whose treatment costs aren’t fully covered, which in turn means safety-net hospitals typically depend on public funding and operate on thin profit margins.

For-profit hospitals can also provide safety-net services and receive public funding. But Ge Bai, an associate professor at Johns Hopkins’ schools of public health and business, said for-profits’ choice of neighborhoods usually reflects their patient base. “For-profits are less likely to be located in a less financially advantaged area,” she said. “That’s why we are less likely to see for-profit safety-net hospitals.”

Bruce Siegel, president and CEO of America’s Essential Hospitals, prefers the term “essential” to “safety net.” “It’s important for people to understand that these hospitals do things that no one else does,” he said, such as community-health programs that target food insecurity and homelessness. He also cited care that’s expensive but not profitable: emergency trauma, burn and psychiatric care.

What’s the danger of not having a universal definition? Does it impact patients?

Paula Chatterjee, an assistant professor of general internal medicine at the University of Pennsylvania, said not having a common definition leads to financial instability, which in turn can lead to hospital closures. She points to Philadelphia’s Hahnemann Hospital, which shuttered in 2019.

“When safety-net hospitals close, a lot of the patients that are most hurt are the uninsured, because that’s what the safety net is really meant to catch,” Chatterjee said. “Uninsured patients often are dealing with a lot of delayed diagnoses and care. They might have complications from chronic conditions that are not able to be managed because of lack of access to care.”

Because hospitals are required to stabilize patients who show up at emergency rooms but are not required to treat them further, a wealthier hospital can refuse the kind of community-oriented care that many safety nets specialize in. If a safety net closes, patients who are unable to pay could be left with nowhere to go.

A clear-cut definition could help ensure clearer funding and should focus on some key characteristics most safety nets share, Chatterjee said: “who are the patients served, how are the hospitals providing services that matter for the community and how is the hospital investing in the community around them.”

What does the government say? Does the “safety net” label affect funding?

When it comes to federal and state funding, what often matters is whether hospitals serve a substantial — though undefined — percentage of Medicaid or uninsured patients. Medicaid, the largest government insurance program for low-income people, doesn’t always cover all of the costs associated with a patient’s treatment. And because Medicaid is jointly funded by federal and state governments, with states having a lot of discretion in how payments are distributed, that gap varies state by state.

To help make up the gap, Medicaid gives some hospitals supplemental funding, including something called the Disproportionate Share Hospital (DSH) payments. States must distribute some of this DSH funding to every hospital that meets one of two federal standards: either by serving a higher percentage of Medicaid patients than the state average or by having at least 25% of their patients qualify as low-income.

But states don’t have to give all of the funding to hospitals that meet the federal criteria. As a result, the congressional commission overseeing Medicaid found there’s no clear relationship between the hospitals that get DSH payments and the hospitals with the highest proportions of low-income or uninsured patients.

“We don’t have a single safety net in this country. We have 56 safety nets, 56 different Medicaid programs, including states and territories,” said Siegel of America’s Essential Hospitals. “Without a clear definition, it’s impossible to target support to those organizations that need it the most.”

According to Siegel, some of “those hospitals that are really faithful to their mission are not getting the support they need, while other organizations who may treat relatively very few Medicaid or uninsured patients still receive support.”

But safety-net funding isn’t just a question of labels. Under the current system, a universal definition would still leave states largely in charge of DSH distribution.

“It’s up to the states to come up with the formula for allocation,” said Teresa Coughlin, a researcher at the Washington, D.C.-based Urban Institute’s Health Policy Center. “In some states, you can have every hospital in the state getting the disproportionate share payment, whereas in another state you might have the public hospital get the DSH payment.”

Chatterjee said the system needs to be more transparent. The latest report on how states distribute DSH money is from 2015. That six-year lag means “we don’t have a lot of understanding of how state and local governments are deciding to support those hospitals,” she said. “Where does that funding come from? Does it change from year to year? We actually don’t know the answers to those questions.”

Before COVID-19, most safety-net hospitals already operated on thin margins, with fewer endowments and investments and smaller reserves than wealthy hospitals. Urban hospitals, with more potential clients, fared better than their rural counterparts. In the last decade, at least 136 rural hospitals across the U.S. have closed, according to an analysis by APM Research Lab and The Texas Newsroom.

According to Bai of Johns Hopkins, among 20 rural hospitals that closed in 2020, at least nine would be considered safety nets, per DSH criteria. Rural hospitals closures have been highest in states that chose not to expand Medicaid; read more about rural hospitals from our local journalism partner The Texas Newsroom.

But the pandemic exacerbated existing problems. Like all hospitals, safety nets paused many elective procedures during the coronavirus’ early months to prioritize less-profitable COVID-19 treatment, depressing already low revenues. Also like most hospitals, they had to hire more staff and to compete for expensive personal protective equipment during a nationwide shortage.

Federal subsidies were a lifeline for safety nets trying to survive the pandemic, and the Department of Health & Human Services created multiple formulas for allocating the CARES Act Provider Relief Funding — the primary form of federal relief funding hospitals don’t have to repay. Because these formulas prioritized speed, some safety nets got less funding initially, according to Coughlin, of the Urban Institute.

“That really was not helpful for the hospitals that the bulk of their patients are Medicaid, not Medicare, and the uninsured,” she said. Later rounds of CARES Act payments fine-tuned the protocol, with safety nets receiving more support. Coughlin said future public-health research should address whether early delays will lead to more hospital closures in the near future.

Moving forward, experts told FRONTLINE that safety-net hospitals must address not only financial sustainability but the mental and emotional health of their workers. Siegel fears staff burnout, which carries its own associated costs. COVID-19 “has had a very important impact on the healthcare workforce, and it’s going to last for years,” he said. 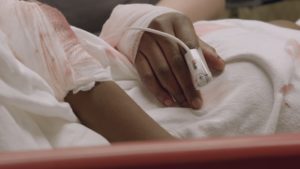