When Khadija Abdulahi Hussein thinks about her son Yasin, she remembers him dancing, laughing, helping others — and wanting the entire world to know who he was.

“But I didn’t know it would be like this,” she says in the new FRONTLINE documentary The Virus That Shook the World, her voice breaking. “I wanted them to know him as a grown man. I mean as a grown-up, with a family, and not dead.”

In March 2020, at age 13, Yasin Hussein Moyo was shot on his family’s balcony in a low-income area of Nairobi, Kenya, by a bullet from police outside, enforcing a COVID-19 curfew that had gone into effect several days earlier. He died of his injury — one of at least 20 people allegedly killed by police in Kenya in connection with the country’s coronavirus crackdown.

Yasin’s parents, Khadija Abdulahi Hussein and Hussein Moyo, speak out about his life and death in a two-night documentary special filmed in 21 countries that airs April 26 and 27, 2021.

The above excerpt features home video of Yasin dancing joyfully. “Now it’s like the gift I was given, someone came and took it away,” Khadija says of her son.

Drawing on extensive personal and local footage, The Virus That Shook the World tells the story of the Moyo family and of other people across the globe who have experienced the pandemic and its consequences in different ways — from a food blogger in Wuhan, China; to a filmmaker in a remote Indigenous village in Brazil; to a musician and puppeteer in Delhi, India.

The series shows how the impacts of the disease that has now killed more than 3 million people have overlapped and differed across cultures, races, faiths and privilege; how various governments have responded; and how the pandemic has exposed existing inequities and social problems.

In the below excerpt, Hussein and Khadija describe the events leading up to Yasin’s death. It had been a “normal” day, Khadija says, with the family gathered in their home, when Yasin summoned her to the balcony after hearing noises outside, and others in the family came along.

“People were screaming, and there was a lot of noise,” Khadija says. “We saw policemen coming towards us. I saw the torch light shining on the wall. When I turned, I heard gunshots. I told them to get down … .”

“When I saw his belly, I felt I was dreaming,” Khadija says. “That’s when I saw my child had a hole in his stomach.”

Following reports of police abuses within the first few nights of Kenya’s coronavirus curfew, including Yasin’s death, President Uhuru Kenyatta apologized for “some excesses that were conducted.” A police official and a spokesperson have described the shooting of Yasin as unintentional. A police officer who was charged with murder in Yasin’s case has pleaded not guilty and was released on bail. Amnesty International Kenya tweeted earlier this month that “Almost 1 year after this death, [Yasin]’s case had not gone into full trial.”

For more on how the coronavirus pandemic has played out in countries across the globe, watch The Virus That Shook the World. From series director James Bluemel and series producer Alice Henley, the two-part, three-hour special premieres Monday, Apr. 26 at 9/8c and Tuesday, Apr. 27 at 10/9c on PBS stations (check local listings). It will also be available to stream in FRONTLINE’s online collection of documentaries, on YouTube and in the PBS Video App. 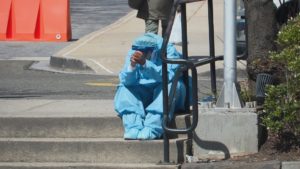