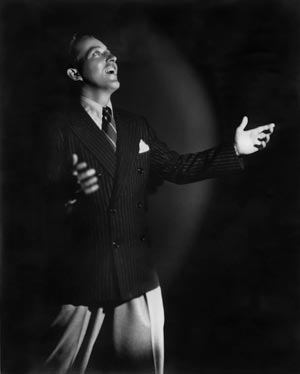 Follow entertainer Bing Crosby’s remarkable life, from growing up in Spokane, Washington, to his death after a good game of golf at a course in Madrid, Spain. He had four sons with his first wife Dixie Lee, who died at the age of 40 of cancer, and two sons and a daughter with his second wife, Kathryn.

The Crosby family moves from Tacoma to Spokane, Washington.

A friend nicknames Harry “Bingo,” later changed to Bing, for his love of an illustrated parody newspaper called “The Bingville Bugle.”

Bing is introduced to Al Rinker and joins him in the local Spokane band, the Musicaladers.

Bing and Al Rinker are now a vocal duo. They begin touring with the orchestra of Paul Whiteman, then one of the most famous bandleaders in America. 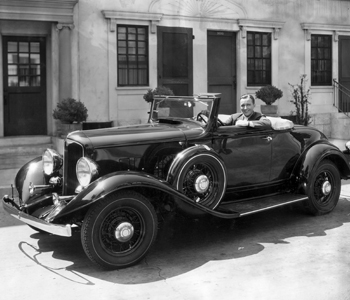 Pianist Harry Barris joins the duo to make The Rhythm Boys. They tour with Paul Whiteman and get their first hit with “Mississippi Mud.”

Nov. Bing starts work in his first film, King of Jazz, a musical revue starring Paul Whiteman. He is also arrested for drink driving and is later sentenced to 60 days in jail, but he is released under escort for filming. His sentence is eventually commuted to 40 days.

Apr. The film King of Jazz is released.

July The Rhythm Boys first appear at the Cocoanut Grove in Los Angeles; Bing is the standout favorite.

Feb. Bing plays himself in “Reaching for the Moon,” a film starring Douglas Fairbanks.

Mar. Bing signs a deal with director Mack Sennett to appear in a series of short comedic films, and signs his first solo contract, with Brunswick Records.

Nov. “The Cremo Singer” radio show premieres on WABC (CBS affiliate). Bing
records “Where the Blue of the Night” for first time, which becomes his theme song. “One More Chance” (short film) is released.

Dec. New York’s Bank of the United States collapses. It was the largest single bank failure in the country’s history. 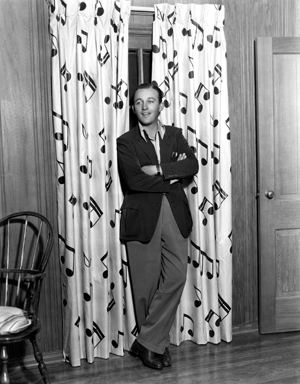 Oct. Bing meets Bob Hope for the first time and gets his first starring role as a radio singer in the musical comedy “The Big Broadcast.” His song “Please” reaches #1.

Nov. “Brother Can You Spare a Dime” reaches Number 1.

Mar. President Franklin D. Roosevelt delivers the first of his evening “fireside chats” to the public over radio.

May Bing signs a two-year deal with Paramount, which calls for two pictures a year.

Nov. The film “Pennies from Heaven” is released and the eponymous song from the film reaches Number 1.

July The Del Mar Racetrack opens in California. Bing is part owner and co-director and greets fans at the gate on opening day.

May “Dr. Rhythm” is released.

Oct. “I’ve Got a Pocketful of Dreams” reaches Number 1 on the charts and remains for four weeks.

Apr. The film East Side of Heaven is released.

Aug. The film The Star Maker is released. 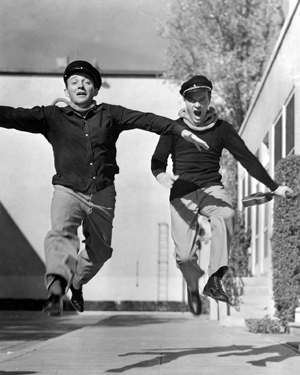 Bing Crosby and Bob Hope on the Road to Singapore (1940) film lot, between scenes.

Mar. The film Road to Singapore is released, the first in a series of Road pictures with Bob Hope which became the highest grossing franchise until the James Bond films.

Sept. The film Rhythm on the River is released. The eponymous song from the film is featured in American Masters – Bing Crosby Rediscovered.

Oct. The song “Only Forever” reaches Number 1 and remains for there 10 weeks.

Dec. Bing signs new contract with Paramount for nine films in three years for around $175,000 per film. He also signs a contract with Decca Records for five years at $60,000 per annum plus a percentage.

Apr. The film Road to Zanzibar is released.

June Submissions to the SEC indicate that Bing has the second highest income in the US behind MGM studio chief, Louis B. Mayer.

Oct. “White Christmas,” written by Irving Berlin, reaches Number 1 for the first time and stays for 11 weeks. It will become the best-selling single of all time.

Nov. The film Holiday Inn is released, featuring “White Christmas.” The song will win the Oscar for Best Song at the Academy Awards in 1943. The film Road to Morocco is also released.

Aug.-Oct. Bing is in production for the film Going My Way. 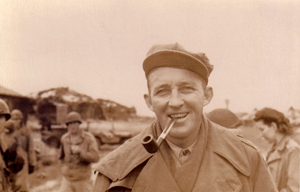 May Going My Way is released, in which Bing takes on his most famous role as Father O’Malley. The film features the song “Swinging on a Star,” by Jimmy Van Heusen and Johnny Burke, which reaches Number 1 and wins an Academy Award for Best Song.

Mar. Bing wins Best Actor for Going My Way at the Academy Awards.

Dec. Bells of St. Mary’s is released, a film in which Bing reprises his role as Father O’Malley alongside Ingrid Bergman and becomes top box office attraction for 1946.

Feb. Bing and Bob Hope appear on the cover of Life Magazine.

Mar. Road to Utopia is released.

Oct. The film Blue Skies is released, in which Bing stars alongside Fred Astaire. 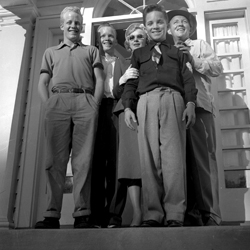 Jan.  Films Road to Rio, a film is financed by Crosby, Hope and Paramount.

Aug.  A group of investors buys The Pittsburgh Pirates, Bing now has 25% of the syndicate.

Dec. The film Road to Rio is released.

Sept. Film Here Comes the Groom is released, in which Bing is directed by Frank Capra and co-stars with Jane Wyman.

Mar. “In the Cool of the Evening,” Bing’s song with Jane Wyman from “Here Comes the Groom,” wins Best Original Song at the Academy Awards.

Sept.  The film Just For You is released, starring Bing, Jane Wyman and the young Natalie Wood.

Jan. The film Road to Bali is released. 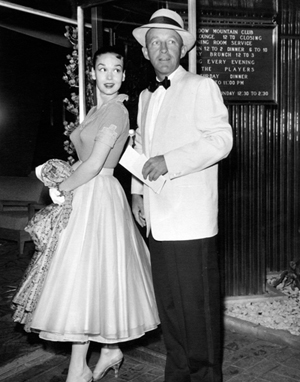 Dec. The Country Girl is released, Bing stars alongside the lovely Grace Kelly.

Mar. Bing attends the Academy Awards where he is nominated for Best Actor for his role in The Country Girl, but loses to Marlon Brando in On the Waterfront. 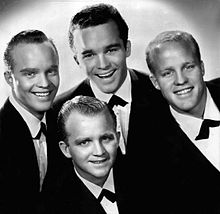 June Signs a 5-year contract with ABC to star in ten TV shows and produce another ten for $2 million.

May The film Road to Hong Kong is released. 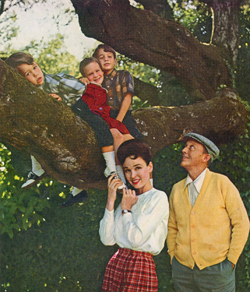 Nathaniel, Mary and Harry with their parents Kathryn and Bing Crosby

June The film Robin and the 7 Hoods is released, with Bing starring alongside Frank Sinatra, Dean Martin and Sammy Davis Jr.

1969
Dec. Bing receives a Peabody Award for services to television.

Apr. American troops withdraw from Vietnam. It’s rumored Bing’s “White Christmas” is played over the American Forces radios as a signal that evacuation should begin.

Oct. 14 Bing Crosby dies of heart attack after a good game of golf at a course outside Madrid, Spain.

Share your memories of watching or listening to Bing Crosby in the comments section, below. 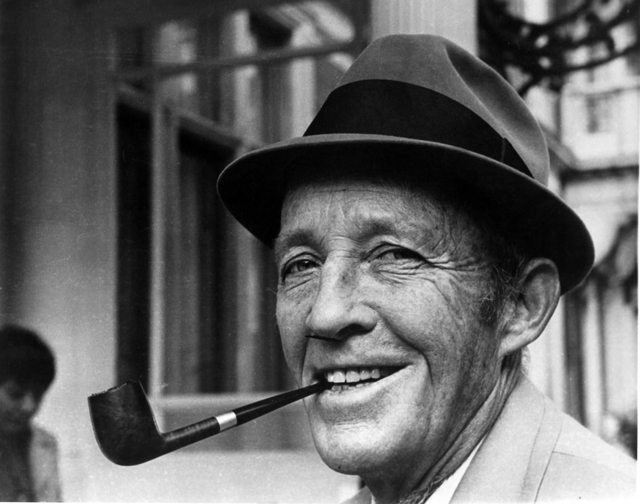