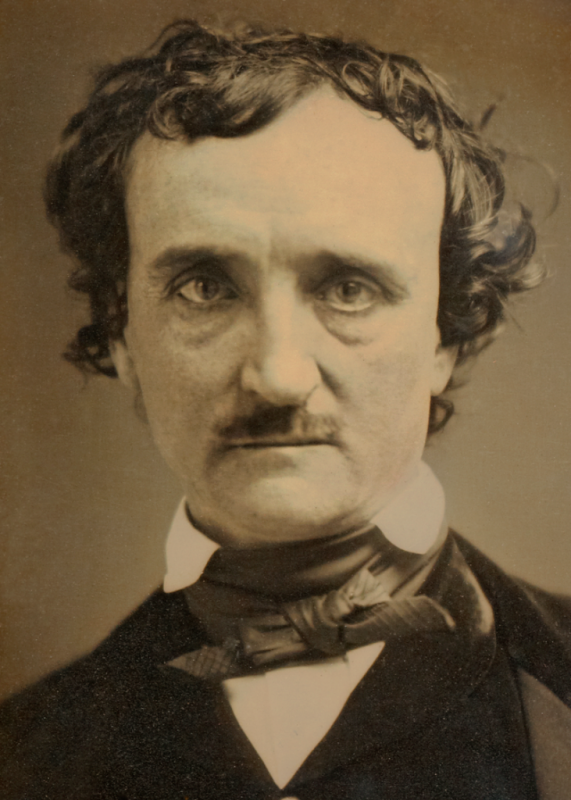 The works of Edgar Allan Poe have a recurring theme of death and mourning.

The trend of Halloween costumes is to parody a phenomenon of the moment — must we mention the Pizza Rat? But some revelers prefer pulling characters out of the vault — the dead, the undead, the classic and timeless.

To master your Halloween costume, take inspiration from any of the hundreds of creative, intellectual and hip American Masters. On your trick-or-treat trail you may get some puzzled looks from political candidates, sexy superheroes and off-the-rails pop stars, but you can take some pride in answering, “Who are you?”

For your consideration, we’ve summoned American Masters from our archive whose careers delve into essentials of the Halloween holiday: horror, fright, creepiness and costumes.

What says American Horror more than the creepy tales penned by the 19th-century writer and poet Edgar Allan Poe (Jan 19, 1809 – Oct 7, 1849)? His name conjures up images of premature burial (“The Premature Burial”), black cats (“The Black Cat”), forbidden crypts (“The Cask of Amontillado”), death by plague (“Masque of the Red Death”), and guilt-ridden insanity (“The Tell-tale Heart”). The macabre subjects of his works do nothing to marginalize his writing or damage his reputation: he is one of America’s greatest writers of lasting impact. His prolific output took place largely between 1835 and 1849 and his characters were often quite human compared to those of other Gothic writers of the 19th century (Mary Shelley portrayed a scientist and monster in Frankenstein; Bram Stoker fleshed out a blood-thirsty vampire in Dracula).

If you want a wingman for your costume party, try going with a raven — the unsympathetic presence that repeats the word “Nevermore” in Poe’s poem, “The Raven.” 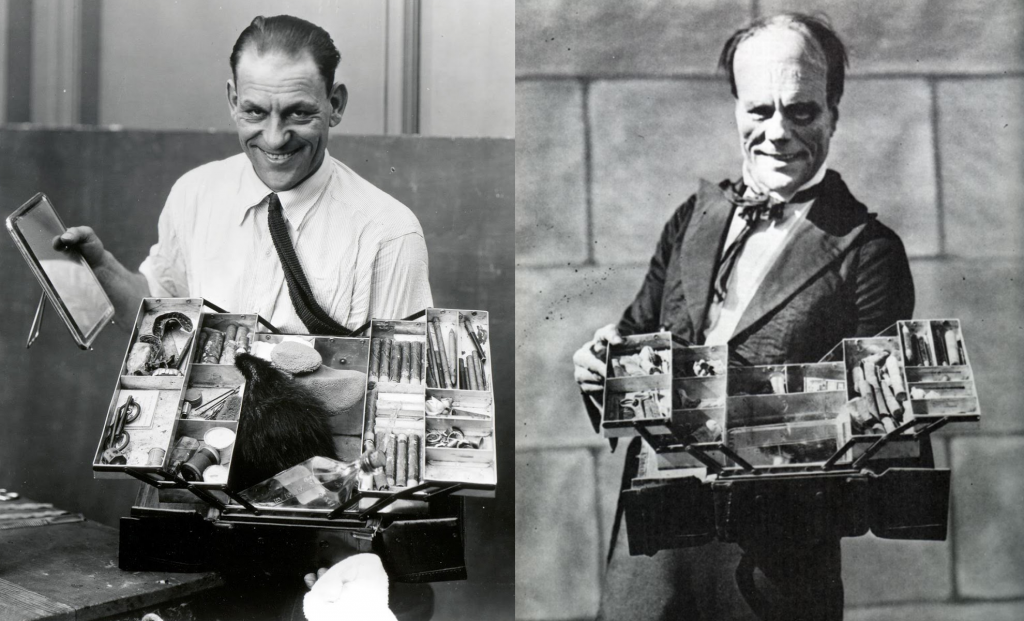 If anyone deserves Best Costume award it’s Hollywood actor Lon Chaney (Apr 1, 1883 – Aug 26, 1930), “the man of a thousand faces,” who went through considerable physical discomfort to portray characters with a variety of physical challenges and disfigurements.

Chaney created his most frightening and grotesque face as the phantom (Erik) in Phantom of the Opera (1925). Kenneth Duran wrote in the Los Angeles Times, “It’s a face beyond nightmare, beyond imagining, one of the most terrifying images ever put on-screen, instantly recognizable on everything from rock concert posters to postage stamps. It’s a face that expresses fury and despair, pleading and rage, that radiates emotions we have no names for and don’t really want to know exist.”

Chaney was paid well for his horrible looks — he made 158 films in Hollywood. His shape-shifting roles ranged from Chinese shipwreck survivor (Shadows 1922) to Fagin in Oliver Twist (1922), to Quasimodo in the Hunchback of Notre Dame (1923), to tough Marines sergeant (Tell It to the Marines 1926), to circus clown (Laugh, Clown, Laugh 1928).

In the year 2000, Chaney’s makeup kit and other artifacts were on display at the Los Angeles Museum of Natural History. In an article on Chaney and a superfan of his, makeup artist Michael Blake, The Los Angeles Times spoke to the museum: “We have about half a million objects in the museum’s collection, and the Chaney makeup kit is definitely one of the top five in terms of items we get queries about,” says Beth Werling, collections manager for the museum’s history department.

Writer Ray Bradbury — interviewed in American Masters – Lon Chaney: A Thousand Faces — stresses that Chaney’s acting was not just a physical feat: “He was someone who acted out our psyches. He somehow got into the shadows inside our bodies; he was able to nail down some of our secret fears and put them on-screen.”

If you can’t pull off the balding pate, jowled neck, perma-frown and stout silhouette of film director Alfred Hitchcock (Aug 13 1899 – Apr 29, 1980), you can mine his many thrillers for costume material.

American Masters – Hitchcock, Selznick and The End of Hollywood looked at Hitchcock films produced in collaboration with David O. Selznick. These included the psychological thrillers Rebecca (1940) — Hitchcock’s first American project — and Spellbound (1945). If not a costume idea, Rebecca does provide a warning about costume parties. 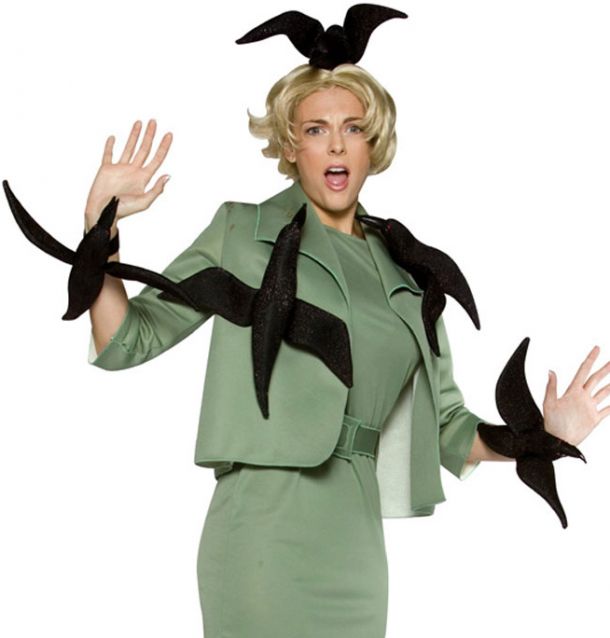 Costume: Tippi Hedren in The Birds, directed by Alfred Hitchcock. You can use construction paper to make crows.

The premise of the film is that a young woman marries a widower she barely knows. His seemingly “perfect” first wife Rebecca is a source of great insecurity for her. For a costume party, the devious housekeeper tricks the woman into wearing the same costume Rebecca did shortly before she died. Needless to say, the costume choice did not go over well with the husband.

We’ve seen some great prop-based costumes that pay homage to Tippy Hedren in The Birds (1963), using prop or paper crows as accessories. 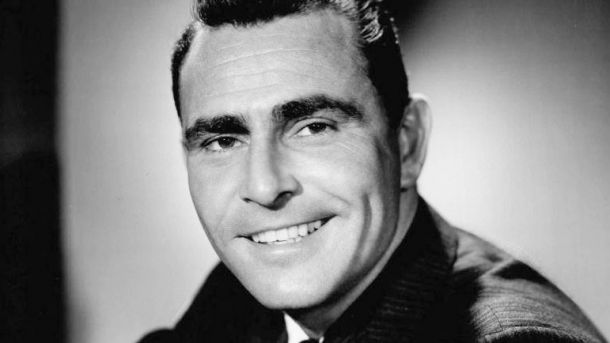 Screenwriter and television producer Rod Serling (Dec 25, 1924 – Jun 28, 1975) is best known for his groundbreaking and Emmy Award-winning series The Twilight Zone (1959 – 1964). Serling narrated the programs and his voice was always a creepy reminder of a world beyond our control.

Through an ingenious mixture of morality fable and fantasy writing, he was able to circumvent the timidity and conservatism of the television networks and sponsors. His goal was to investigate the moral and political questions of his time. By cloaking controversial subjects in a veil of fantasy, Serling said, “I found that it was all right to have Martians saying things Democrats and Republicans could never say.” 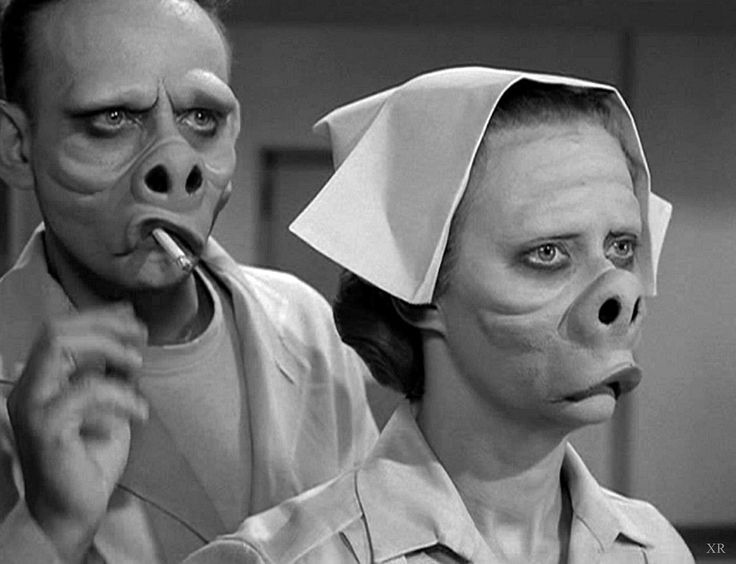 Screenshot from The Eye of the Beholder episode of The Twilight Zone, written by Rod Serling

For the ultimate rebuke to sexy Halloween costumes, consider Serling’s characters in the famous and often parodied Twilight episode “Eye of the Beholder” (1960). Costumes based on the pig-nosed humanoids have proven popular over the years. Any Planet of the Apes costume is also an homage of sorts to Serling, who co-wrote the film with Michael Wilson.