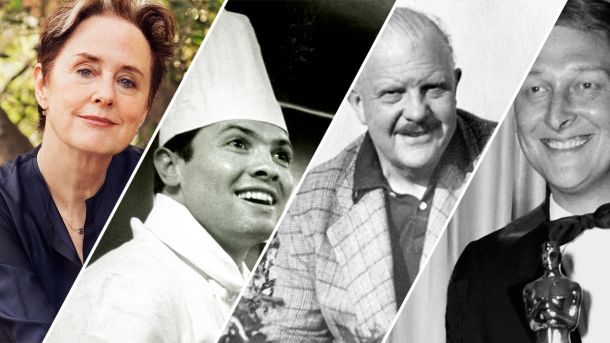 This month, we’ve gathered a selection of documentaries on celebrated chefs, plus we’re giving you one last chance to watch Elaine May’s documentary about her former comedy partner Mike Nichols.

James Beard: America’s First Foodie tells the story of the celebrated chef who pioneered the farm-to-table movement and promoted seasonally driven dining. Jacques Pépin: The Art of Craft is the definitive story of one of the nation’s most beloved and revered food icons (who taught Americans how to make an omelet). In case you missed Alice Waters and Her Delicious Revolution last month, there is still time to learn about one woman’s mission to change how America thinks about its food. Mike Nichols: American Masters explores the 50-year career of the performer and director, and features interviews with Meryl Streep, Steven Spielberg, Tom Hanks, Dustin Hoffman, Alec Baldwin, and many others.

Enjoy these films now streaming for a limited time below, and on the PBS Video app.

Alice Waters and Her Delicious Revolution

Jacques Pépin: The Art of Craft

It’s an only-in-America story: A roguish young immigrant with movie-star looks, a charming Gallic accent, a populist sense of anything’s-possible optimism, and an ability to raise humble kitchen techniques to a breathtaking art form becomes one of the nation’s most beloved and revered food icons. Jacques Pépin’s story—which encompasses his contributions to the profession of cooking, food television and the very way we eat today—is a tale even his legions of devoted fans may not be familiar with. Today he is known as a kitchen supernova, a working whirlwind of creative energy even at 80 years old, who crisscrosses the country teaching, cooking, speaking, consulting and enjoying the celebrity generated by 13 successful television cooking series, nearly 30 cookbooks, and accolades ranging from a national Emmy Award (for his series co-hosted with Julia Child) to the French Legion of Honor. But in telling his own story in this documentary profile, he acknowledges that the very notion of being a “celebrity chef” was not only unplanned—it was virtually unthinkable in the profession and world in which he grew up.

James Beard: America’s First Foodie tells the story of the Portland, Oregon native, who had the first cooking show on television (1945); who was the author of 22 cookbooks along with a syndicated newspaper column and countless magazine pieces; and who ran an acclaimed cooking school out of his townhouse in New York City. James Beard introduced Julia Child to New York, boosting her place as a culinary grande dame. Child in turn once said, “I may have brought French cooking to America, but Jim brought American cooking to America.” He was a pioneer of the farm-to-table movement, consulting on menus for iconic restaurants such as The Four Seasons, promoting seasonally driven dining.

Winner of an Oscar, a Grammy, four Emmys, nine Tonys, three BAFTAs and many other awards, director, actor, writer, producer and comedian Mike Nichols (November 6, 1931 – November 19, 2014) was an artistic trailblazer. As the legendary comedy duo Nichols and May, Nichols and his partner Elaine May revolutionized comedy in the late 1950s and early 1960s. Now, May has directed the first documentary about her former partner, Mike Nichols: American Masters.