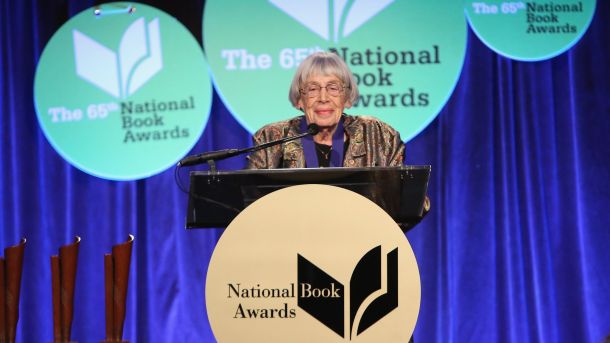 American Masters — Worlds of Ursula K. Le Guin is a finalist for the 2020 Hugo Award in the category of “Best Related Work.”

Directed by Arwen Curry and produced with Le Guin’s participation over a decade, the film is an intimate journey through the writer’s worlds, both real and fantastic.

Likened to the Academy Awards, The Hugo Awards are one of the most prestigious honors for science fiction and fantasy literature. First awarded in 1953, recipients have included the likes of Neil Gaiman (“American Gods,” “The Graveyard Book”), J. K. Rowling (“Harry Potter and the Goblet of Fire”), and Frank Herbert (“Dune”). It is awarded annually at the World Science Fiction Convention and chosen by its members. Ursula K. Le Guin herself won twice for her novels “The Left Hand of Darkness” in 1970 and “The Dispossessed” in 1975.  Interested in reading Le Guin’s work? Check out where to start from recommendations by American Masters fans.

This year’s ceremony will be held virtually at ConZealand and hosted by George R. R. Martin on August 1st.

To honor her nomination, we interviewed director Arwen Curry. She shared what it was like working directly with the acclaimed author, her favorite Le Guin novels, and her thoughts on the role of science fiction today.

Q. What surprised you most in working with Le Guin over the years?

A. I was always surprised by Ursula’s level of energy, intellectual and otherwise. She rested when she needed to, particularly toward the end of her life when she was in her mid to late 80s, but when she was on, she was really on — always listening and making connections. It was such a pleasure to have a conversation with her, even about something like the weather, because she was always noticing things people ordinarily don’t see.

Q. Which is your favorite Le Guin novel? Did that change while making the film?

A. Le Guin is best known for her masterpieces “The Left Hand of Darkness,” “The Dispossessed,” and of course the “Earthsea” books. I have a soft spot for her 1971 novel “The Lathe of Heaven,” in which a man’s dreams change reality, but only he knows (at first). I also want to give a plug to her many collected speeches and essays, which are delicious to read — they are so sharp, witty, and spot-on, and they display the breadth of her engagement with ideas and the world.

Q. In the 1976 introduction to “The Left Hand of Darkness,” Le Guin reflects, “Science fiction is not predictive; it is descriptive.” What are your thoughts on the role of science fiction in culture?

A. It’s hard to argue now many of the tropes central to science fiction — things like post apocalyptic scenarios, flying cars, robots, clones — are fringe concerns. But more important is the very premise of science fiction as a laboratory where writers conduct thought experiments — about the possible forms of families and societies, in Le Guin’s case. This is essential to our survival as a species as we face climate change, a global pandemic, and cultural and political upheaval. Before we can change the way we organize ourselves, we first have to imagine it.

Ursula K. Le Guin, groundbreaking author of the “Earthsea” fantasy series and “The Left Hand of Darkness,” transformed American literature by bringing science fiction out of the margins. Through her influential work, Le Guin opened doors for generations of younger writers like Neil Gaiman, Margaret Atwood, Michael Chabon and David Mitchell — all of whom appear in the film — to explore fantastic elements in their writing.

Directed by Arwen Curry, who is also a co-producer with Jason Andrew Cohn and Camille Servan-Schreiber.

Major support for American Masters – Worlds of Ursula K. Le Guin is provided, in part, by the National Endowment for the Humanities, bringing you the stories that define us. Additional support for is provided by: California Humanities, Berkeley Film Foundation, Alex Borstein, Kent Rasmussen & Celia Ramsay, Paul D. Jarman, Mary Kay Kare, and others.