Unlike mere pop stars, Bob Marley was a moral and religious figure as well as a major record seller internationally. 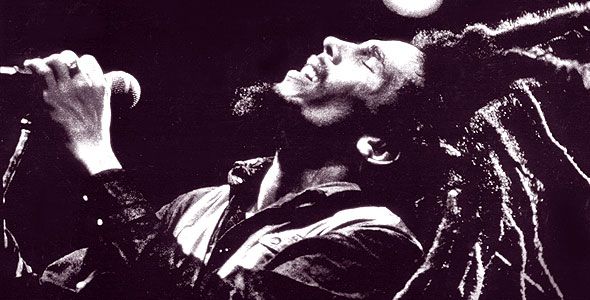 Music raises the soul of man even higher than the so-called external form of religion…That is why in ancient times the greatest prophets were great musicians. – Hazrat Inayat Khan, “The Mysticism of Sound and Music”

Without doubt, Bob Marley can now be recognized as the most important figure in 20th century music.

It’s not just my opinion, but also, judging by all the mainsteam accolades hurled Bob’s way lately, the feeling of a great many others too. Prediction is the murky province of fools. But in the two decades since Bob Marley has gone, it is clear that he is without question one of the most transcendant figures of the past hundred years. The ripples of his unparalleled achievements radiate outward through the river of his music into an ocean of politics, ethics, fashion, philosophy and religion. His story is a timeless myth made manifest in this iwah, right before our disbelieving eyes.

There will come a day when music and its philosophy will become the religion of humanity…If there remains any magic it is music.

Unlike mere pop stars, Bob was a moral and religious figure as well as a major record seller internationally. To whom does one compare him? In a recent Sunday New York Times Arts and Leisure lead story, Stanley Crouch makes a compelling case for Louis Armstrong as the century’s “unequaled performer,” excelling not just in his instrumental inventiveness but in his vocal style as well, transforming the way music was made and listened to, and influencing performers of all stripes right down to this very day. But you don’t see thousands of Maori and Tongans and Fijians gathering annually to pay honor to Louis Armstrong; you don’t witness phalanxes of youth wandering the world sporting Louis Armstrong t-shirts. In fact, big as the Beatles were, you hardly see any Beatle shirts around anymore, except for those few featuring John Lennon’s sorrow-inducing visage. Can you imagine an image of Elvis sewn onto the sleeve of an armed guerilla? When was the last time you saw a Michael Jackson flag or a Bob Dylan sarong or Madonna rolling papers? All of these exist in Marleyite forms, his iconography well nigh a new universal language, the symbol, as Jack Healey of Amnesty International continues to tell people, of freedom throughout the world.

That music alone can be called real which comes from the harmony of the soul, its true source, and when it comes from there it must appeal to all souls…Music alone can be the means by which the souls of races, nations and families, which are today so apart, may one day be united…The more the musician is conscious of his mission in life, the greater service he can render to humanity.

Most of the pop stars thrown up over the past hundred years had entertainment as their first and foremost goal. Not so Marley. He was conscious of his role as the bringer of the message of Rastafari to the consciousness of the outside world. He cared nothing for earthly trappings, and loved nothing better than lying on Jah’s cool earth at night watching the heavens revolve above him, rock stone as his pillow. He was here to call people to God.

So we can’t compare Marley to other well-known musical figures. As for politics, he eschewed them, although his actions caused him to be perceived (and sometimes feared) as a profoundly radical political leader too. But his were the anti-politics of salvation through love and love alone, an unshakeable knowledge of the oneness of all humankind.

Music is behind the working of the whole universe. Music is not only life’s greatest object, but music is life itself…Music being the most exalted of the arts, the work of the composer is no less than the work of a saint.

As for innovation, Marley was a multi-talented synthesizer of new ideas and rhythms, beginning with his precocious “Judge Not” solo debut at the dawn of the ska era, right up through his ongoing experiments with gospel, r&b, rock, folk, jazz, Latin, punk, scat, disco, and even (in unpublished form) bossa nova. Bob understood that reggae had the magnificent capaciousness to absorb all other influences and anchor them solidly to the drum and bass underpining that is its essential element, the sweet seductive secret of its success.

Actually the real secret is that Marley’s music is about something. It has value. Bob’s art is life transforming, answering our highest needs. It answers in a positive way, the question that Carlos Santana says we must always ask before we begin any activity in life: how is this going to make the world a better place? Although Bob became a commercial artist, he was not making commercial art. His art transcended pop fluffery. Many are there who swear that his music literally saved their lives.

The use of music for spiritual attainment and healing of the soul, which was prevelent in ancient times, is not found to the same extent now. Music has been made a pastime, the means of forgetting God instead of realizing God. It is the use one makes of things which constitutes their fault or their virtue.

It is in the vast amount of adherents that Bob’s work continues to lure, that we begin to sense his obvious immortality, even from this early point of focus. Elvis Presley may have been the biggest single rock icon of all time, but are his songs (none, incidentally, penned by him) really saying anything beyond mere pop cliche? Bob Dylan may be the most respected poet of his generation, but his often deliberately obfuscatory lyrics stand in the way of clear translation, and limit his appeal to the non-English speaking audience. Marley, on the other hand, refined his lyric art to a steely perfection, using the language of the streets to attain the stars. His words were so perfectly simple that they achieved eloquence. Today, his elemental stories can be related to and understood by people anywhere who suffer and love and long for salvation. In other words, just about every one of us.

Marley’s ready embrace of herb, and the flaunting of his startling mane of locks that grew more ferocious as the ’70s wound down, contributed to his image as a rebel for all seasons, treated like a deity among defiant youth and seasoned revolutionaries alike, who recognized him as one of their own, embracing him in Harare during Zimbabwe’s independence, and sending him messages of solidarity from Peruvian jungles to Himalayan hideaways.

So it appears, at least to this writer, that Bob Marley has the clearest shot at being recognized as the Artist of the 20th Century, at least as far as music is concerned, and probably a lot more. I hereby predict with reckless confidence that hundreds of years into the future, Marley’s melodies will be as prevalent as those of any songwriter who has ever lived. “No Woman No Cry” will still wipe away the tears from a widow’s face; “Exodus” will still arouse the warrior; “Redemption Song” will still be a rallying cry for emancipation from all tyrannies, physical and spiritual; “Waiting in Vain” will still seduce; and “One Love” will be the international anthem of a coffee-colored humanity living in unity, in a world beyond borders, beyond beliefs, where everyone has learned at last to get together and feel all right.

(Man) loves music more than anything else. Music is his nature; it has come from vibrations, and he himself is vibration…There is nothing in this world that can help one spiritually more than music.

In his true heart of hearts, Bob Marley heard the harmony of the heavens, and shared that celestial sound with the god-seeker in each of us. Thus it is not surprising that the N.Y. Times, seeking one video to epitomize the past century, preserved in a time capsule to be opened a thousand years hence, chose “Bob Marley Live at the Rainbow, London, 1977.” Or that the same “newspaper of record” called Marley “the most influential artist of the second half of the 20th century.”

We are all ennobled by our proximity to Marley and his art, his eternal songs of freedom.

Roger Steffens is an actor, author, reggae historian and curator of the current exhibition at the Queen Mary in Long Beach, California called “The World of Reggae featuring Bob Marley/Treasures from Roger Steffens’ Reggae Archives,” on view through Sept. 30.

For information about the Queen Mary exhibition: theworldofreggae.com 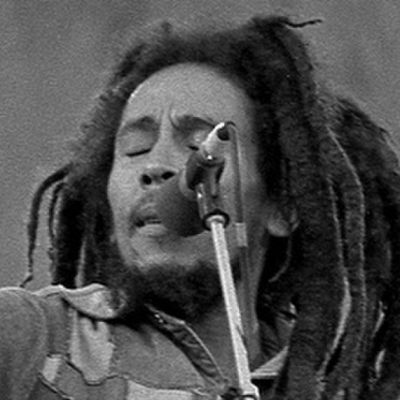