Explore the life of Flannery O’Connor whose provocative fiction was unlike anything published before. Featuring never-before-seen archival footage, newly discovered journals and interviews with Mary Karr, Tommy Lee Jones, Hilton Als and more.

A devout Catholic who collected peacocks and walked with crutches due to lupus, O’Connor’s illness, religion and experience as a Southerner informed her provocative, sharply aware stories about outsiders, prophets and sinners seeking truth and redemption. With her distinctive Southern Gothic writing style and characteristic wit and irony, the film investigates how O’Connor didn’t shy away from examining timely themes of racism, religion, socioeconomic disparity and more. Over the course of her short but prolific writing career, she published two novels, 32 short stories, numerous columns and commentaries, and won many awards, including the National Book Award and three O. Henry Awards, the annual award given to short stories of exceptional merit.

“As one of the best short story writers the nation has ever produced, O’Connor holds a mirror up to our contemporary moment, navigating the issues of racism, religious faith and disability that still haunt us today,” said co-director Mark Bosco, S.J.

“O’Connor managed to see the humor and the ridiculousness of society while documenting its injustices and imagining moments of redemption,” added co-director Elizabeth Coffman.

American Masters: Flannery is the winner of the first Library of Congress Lavine/Ken Burns Prize for Film. Ken Burns called the film, “an extraordinary documentary that allows us to follow the creative process of one of our country’s greatest writers.” 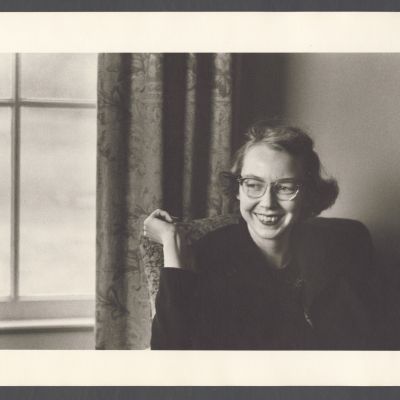 Flannery is a production of Long Distance Educational Media in association with THIRTEEN’s American Masters.

Major funding for Flannery is provided by The Better Angels Society, National Endowment for the Humanities, The Joan and Bill Hank Center for the Catholic Intellectual Heritage, Virginia Wellington Cabot Foundation, Patrick and Becky Cipollone, Jesuit Community of Loyola University Chicago, and William and Maureen Runzel.

- One critic called her perhaps the most naturally gifted of American novelists: Flannery O'Connor.

- Everything That Rises Must Converge.

- She's one of the best writers of the 20th century.

I've read everything that she's written.

- Flannery O'Connor is one of the writers least afraid to look at the darkness.

- 'We've had an accident!' the children screamed in a frenzy of delight.

- You think it's this bitter old alcoholic who's writing these really funny, dark stories, and then you find out she's a woman and that she's devoutly religious.

- You get someone who's writing out of a specific time, civic set of manners.

What she found was mystery.

I think that a serious fiction writer describes an action only in order to reveal a mystery.

- How was she going to find the stories?

Cause she knows she needs to tell.

and how is she going to tell them?

(light music) (typewriter clicking) - I do not want to be lonely all my life, but people only make us lonelier by reminding us of God.

- It was the illness that made her the writer that she is.

I feel that the grotesquity of my own work is intensified by the fact that I'm a servant and a Catholic writer.

- She ignored the disapproval of her religion.

She ignored the disapproval of her fiction.

She just saw the mystery of the craziness.