Explore the inner life and works of the activist, playwright and author of "A Raisin in the Sun," Lorraine Hansberry. Narrated by actress LaTanya Richardson Jackson and featuring the voice of Tony Award-winning actress Anika Noni Rose as Hansberry.

On March 11, 1959, Lorraine Hansberry’s A Raisin in the Sun opened on Broadway and changed the face of American theater forever. As the first-ever black woman to author a play performed on Broadway, she did not shy away from richly drawn characters and unprecedented subject matter. The play attracted record crowds and earned the coveted top prize from the New York Drama Critics’ Circle. While the play is seen as a groundbreaking work of art, the timely story of Hansberry’s life is far less known.

The documentary Lorraine Hansberry: Sighted Eyes/Feeling Heart is the first in-depth presentation of Hansberry’s complex life, using her personal papers and archives, including home movies and rare photos, as source material. The film explores the influences that shaped Hansberry’s childhood, future art and activism. Filmmaker and Peabody Award-winner Tracy Heather Strain (Unnatural Causes, I’ll Make Me a World, American Experience: Building the Alaska Highway) crafts the story of one woman who believed, like many of her generation, that words could change society. Family, friends and colleagues, including Sidney Poitier, Ruby Dee, Harry Belafonte, her sister Mamie Hansberry, Lloyd Richards, Amiri Baraka and Louis Gossett, Jr., share their personal memories of Hansberry, offering an intimate look at a woman who was, as Poitier says in the film, “reaching into the essence of who we were, who we are, and where we came from.”

Narrated by acclaimed actress LaTanya Richardson Jackson (The Fighting Temptations, A Raisin in the Sun) and featuring the voice of Tony Award-winning actress Anika Noni Rose (A Raisin in the Sun, Dreamgirls) as Hansberry, the documentary portrays the writer’s lifetime commitment to fighting injustice and how she found her way to art—the theater—as her medium for activism at a crucial time for black civil rights. Lorraine Hansberry: Sighted Eyes/Feeling Heart also explores her concealed identity as a lesbian and the themes of sexual orientation and societal norms in her works. The film title comes from Hansberry’s view that “one cannot live with sighted eyes and feeling heart and not know or react to the miseries which afflict this world.” 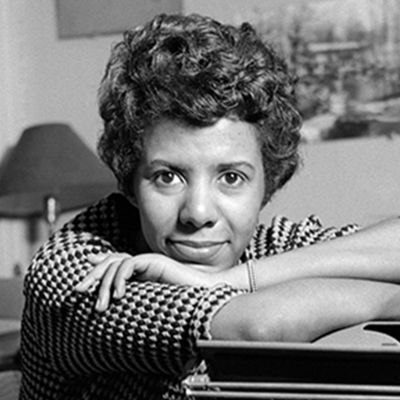 Serious drama - serious drama - drama that has at least the objective of making a larger statement about life, I think sooner or later has to become involved in its time.

Lorraine Hansberry is hugely important for having written 'A Raisin in the Sun,' the most celebrated play by an African American author, considered one of the great plays of the 20th Century.

Looking in the mirror this morning, I'm thinking I'm 35 years old, I'm married 11 years, and I've got a boy who has got to sleep in the living room because I've got nothin', hey?

Nothing to give him but stories!

She was reaching into the essence of who we were, who we are, where we came from.

It isn't as if we got up today and said, 'What can we do to irritate America?'

Lorraine was a very political person.

Her plays - that to me is her jumping-off place.

She's fighting the oppression of women.

Lorraine was a left-wing radical.

It really doesn't matter whether you're talking about the oppressed or the oppressor.

An oppressive society will dehumanize and degenerate everyone involved.

Among all the women I knew, she was the most exciting.

As a middle-class black woman, Hansberry was supposed to live a conventional life.

And certainly in her early years in New York, she was not living a conventional life.

She's living this kind of parallel life and writing about it.

Lorraine became a part of my consciousness.

She seemed to know something about everything.

She was a profound thinker.

Lorraine was this new moment on the horizon.