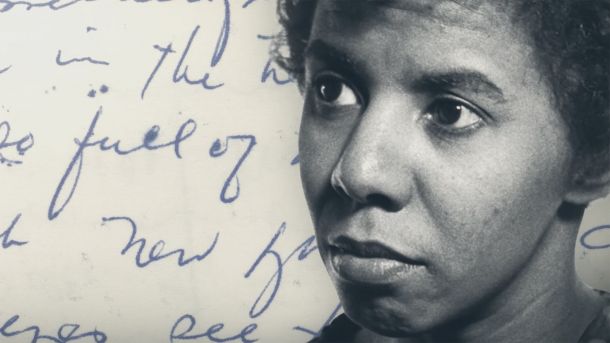 Lorraine Hansberry believed that words could change society. As the first-ever black woman to author a play performed on Broadway, she did not shy away from richly drawn characters and unprecedented subject matter. Actor Sidney Poitier says in the American Masters film Lorraine Hansberry: Sighted Eyes/Feeling Heart that Hansberry was “reaching into the essence of who we were, who we are, and where we came from.”

1) “All which I feel I must write has become obsessive. So many truths seem to be rushing at me as the result of things felt and seen and lived through. Oh, what I think I must tell this world.”

Lorraine Hansberry was born and raised in the South Side of Chicago on May 13, 1930. At the time, the city’s African American population was burgeoning, a result of the Great Migration. As a result, she grew up seeing people from all walks of life coming together and struggling together in the same place and time. Her father was an avid anti-segregationist and a notorious real estate mogul, giving Lorraine the social and economic liberty to pursue writing as a career – one that was rare for black women at the time. Growing up and living through the trials of racism and sexism that afflicted the world she lived in, her natural gravitation towards writing gave her no choice but to express those experiences through her talents.

2) “You are young, gifted, and black. In the year 1964, I, for one can think of no more dynamic combination that a person might be.”

By the time she had reached her early 30s, Lorraine had found fame and success as a playwright, but she had also grown incredibly ill with pancreatic cancer. Despite her declining health, she spent much of her dwindling energy speaking out about the issues that had always been close to her heart. On May 1, 1964, she left the hospital to speak to six teenage winners of a national creative writing contest in New York City. Following the above quote, Lorraine went on to encourage those teenage writers to write about the world as it is, to work hard at it, to care about it, and to tell the story of their people. On that day she had summoned enough strength for the sole purpose of speaking to the future writers of the African American experience, and this was, if nothing else, a skill and a function that she felt was critical in their movement out of the shadows of racism and discrimination.

3) “One cannot live with sighted eyes and feeling heart and not know or react to the miseries which afflict this world.”

In 1938, the Hansberry family moved to Washington Park, an all-white sub-division in Northwest Woodlawn. When black families did buy or rent in white neighborhoods, they often faced violence – including having their cars lit on fire, rocks thrown through their windows, and physical assault. Soon after moving, the Hansberry’s experienced an angry mob outside their home, where a rock was smashed through their window. It is important to note that Carl Hansberry moved to make a political point, as an attempt to challenge the legality of a “restrictive covenants” that protected segregated areas through the power of collective homeowner action. Despite heroic efforts, the Hansberry’s faced severe legal backlash when Woodlawn homeowners fought the sale in state court and won, forcing the family out of their home. Hansberry, convinced his cause was just, took his case to the Supreme Court. Hansberry v. Lee (1940) found the Washington Park covenant was found illegal due to a technicality, but it was not deemed unconstitutional. It was the continuous indifference and discrimination, by both white citizens and American law, that overshadowed small victories of men like Carl Hansberry. The constant backlash against positive change weighed on men like Mr. Hansberry, a weight that Lorraine suspected led to his early death.

4) “I have come to maturity, as we all must, knowing that greed and malice and indifference to human misery, bigotry and corruption, brutality and, perhaps above all else, ignorance abound in this world.”

Lorraine Hansberry was committed to radical honesty about the state of the world. She was not just a leftist, but a radical. Focused primarily on the black working-class struggle, she drew from her experience coming of age in a time defined by the dreams of the Great Migration. In her short lifetime, Hansberry witnessed the violent Birmingham riots, lynchings, segregation, sexism, and an anti-communist scare that could have destroyed her life. The brutality and hatred that she experienced in her lifetime provided enough material to write about forever, but she focused on ignorance above all. For Hansberry, the proliferation of ignorance was the problem and ending it was the solution. In her most notable play, “A Raisin in the Sun,” Hansberry shined a light on the black community in Chicago, forcing audiences both black and white to leave their ignorance about race at the theater doors. She focused on informing through storytelling and words, and encouraged other young black writers to do the same.

5) “Eventually it comes to you: the thing that makes you exceptional, if you are at all, is eventually that which must also make you lonely.”

Lorraine carried multiple identities with her throughout her life – she was black, a woman, a lesbian, and an artist. While the concept of intersectional identity is taken for granted today, in the 1950s and 60s when Lorraine was really juggling these different parts of herself there was no completely inclusive community for her. Hansberry recognized that while she was exceptional for having the perspective of so many marginalized communities, this gift was a curse in the sense that she never felt truly at home with any one of them. She was a pioneer not just in her many firsts, including being the first black woman to write a Broadway play, but also in her real acceptance of her position in American society and her willingness to stand alone, to be “lonely,” if it meant being true to all of the controversial parts of her existence.