Filmmakers Robert Gordon and Morgan Neville were kind enough to answer some questions about their film.

Q: What first got you interested in doing a film of Muddy Waters?

Robert Gordon: I was writing Muddy’s biography for Little, Brown and, in order to get closer to Muddy, I began hunting up film and video performances and interviews. The more I found, the more apparent a documentary became, especially when considered with all the interviews I was conducting. I was four years into the book and not really seeing the end, and couldn’t take on a documentary by myself. I’d met Morgan when he came through Memphis making the Sam Phillips documentary, and the Muddy documentary grew from our mutual interest.

Morgan Neville: Robert had been working on his Muddy Waters book for a few years and had been telling me how well the story would work in a documentary. We got together in Memphis one Labor Day weekend and watched old Muddy Waters videos and talked about the possibilities for a film. After that, we were decided, this documentary had to be made.

Q: When did you first become aware of Muddy Waters?

RG: I came to Muddy late in his career, 1977, when his comeback began. I’d been into blues for several years by that point, but being Memphis-based, I was into Memphis and Mississippi Delta blues. I didn’t follow the music up to Chicago until I had a good grounding here, and Muddy was my exposure to Chicago blues. I fell for him big, and saw him over a dozen times.

MN: I had long been a fan of Muddy’s music, but I didn’t know much about the man until Robert started telling me stories. I knew much more about Howlin’ Wolf and John Lee Hooker. Musically, each of those artists seems to have a distinctive take on the blues. However, Muddy’s music IS the blues, if that makes sense. It strikes me as the most seminal and purest articulation of the music.

RG: I researched Muddy for six years for the film and the book, and there were lots of surprises. He wasn’t from the town he said he was from, he wasn’t the age he said he was-these biographical details were new. But also learning about the man-from his granddaughter whom he raised, from his brother who stayed in Mississippi, from his mistresses-some of whom still loved him and some of whom most definitely did not. I guess I was surprised by how many different things he was to different people. A complicated man.

MN: I always like learning the small details about a subject. In Muddy’s case, I love to know that he sat around watching Chicago White Sox games and eating Grape Soda mixed with Cherry Walnut ice cream. Muddy’s music tells you so much, so those details seem like the only thing left to fill in.

MN: Making this documentary was an incredibly interesting experience. We probably drove close to 4,000 miles making this film, zigzagging the south. We went WAY off the beaten path to find both interviewees and locations. At various times we found ourselves flying across Mississippi in cropdusters, hunting for interviewees for days on the streets of Chicago’s South Side, and sharing a beer with Keith Richards at his New England mansion. You can’t beat that.

RG: It was 3300 miles in 11 days-and that was just one field trip. It took us from Chicago to Gainsville, Florida-including a 50 degree temperature change in one driving day.
One of my favorite interviewing moments was at Keith Richards’ house. Just after we arrived, he marched us outside, showed us where he’d had two statuettes built into the side of his house-Muddy Waters and Robert Johnson. (I also liked the sign on his library door: “Rehab is for quitters.”)
We knew we were documenting something that was disappearing-the original blues players who made the migration north-but it was shocking to see the world disappearing before our own eyes. For example, we filmed Jimmie Lee Robinson on Maxwell Street, and he walked and drove among the buildings that were left and told us what used to be. Next time, ALL the buildings were gone, and the visit after that Jimmie Lee was gone too. Those sorts of instances gave the show an added urgency.

MN: Muddy’s power was in his music and the multitude of ways in which it resonated with emotions, with history, with place. Muddy himself was not one to elaborate on his craft, or for that matter, much of anything. We knew from the start that the power of our documentary would have to come from the same place that Muddy’s power came from, the music. Muddy’s personal story-from Mississippi sharecropper to underappreciated Northern blues act-was in many ways archetypal. We didn’t want to dwell too deeply in facts, because if you were to tell Muddy’s story with just facts, he would disappear.

RG: Exactly. We knew a strictly chronological, biographically linear approach would kill our story. And in a way, too, we knew being too musical would hurt us-note that we don’t dwell too much on musical stories, instead letting the music speak for itself. We decided on a capsule approach to storytelling, listing the major topics we wanted to cover, and dividing our material into these capsules. It let the sections of Muddy’s life become more vivid and strong, a better representation of the compartmentalization of his life.

MN: Frankly, money was the main obstacle. We started this film as a labor of love (i.e. we had no funding). That meant that we had to work on this while we did our more gainful work. It took us four years to make, but we stayed pure to our goal. We had decided to put every dollar we had for the film on the screen. We made our cut of the film without thinking of rights or budgetary issues. In the end, we didn’t have to lose anything because of money.

RG: Instead of having a narrator, we decided early on that we’d find enough interviews with Muddy-audio and video-to have him tell his own story. To our surprise, there were not a lot of very clean sounding interviews. Print journalists who did great interviews with Muddy seemed to have decided as a group to use the cheapest, lowest fidelity tape recorders. So it was a very time-consuming hunt in the US and UK for good quality interviews with Muddy.
We also had the ongoing problem of people dying on us. I’d been fortunate enough to get a great audio interview with Jimmy Rogers, Muddy’s guitarist, just before he got sick and died. We’d loved to have included him in the show-or Little Walter or Otis Spann or Junior Wells-but these people were not well documented in their lifetimes. Fortunately, the surviving bandmembers were excellent characters themselves, and we had no problem including them.

Q: Please describe your background credits, how maybe they led to this film.

MN: I have made many documentaries about American popular music, including “Hitmakers,” about pop songwriting in the Brill Building, and a film about Sam Phillips and Sun Records (“The Man Who Invented Rock”). I was shooting that last documentary in Memphis in 1998 with our mutual friend and (great music writer) Peter Guralnick and he introduced us. Robert lives in Memphis, the gateway to the Mississippi Delta. I love Memphis and just being there affects one’s outlook. A sense of place is instrumental to everything. I think that helped inform our decisions. We decided early on that we had to make people feel the places Muddy lived.

RG: I was born and raised in Memphis, got exposed here not only to blues music but to the people who made the music. In high school, I regularly brought a pint of Ten High bourbon to Furry Lewis’s house, and didn’t know that was unusual until I moved away for college. My first book, “It Came From Memphis,” was about how race, economics, and geography created Memphis art. My first documentary, from 1990, was about Memphis blues; “All Day and All Night” featured B. B. King and Rufus Thomas. I spent most of the 1990s writing and making shorter videos (my music videos have appeared on MTV, BET, and CMT-I’m proud of the range), but I was real glad to get back into the longer form. 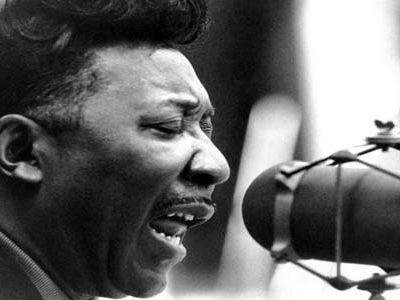