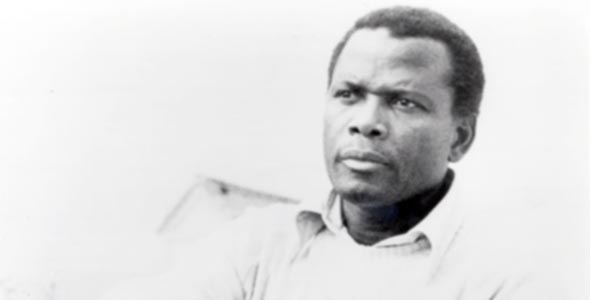 More than an actor (and Academy-Award winner), Sidney Poitier is an artist. A writer and director, a thinker and critic, a humanitarian and diplomat, his presence as a cultural icon has long been one of protest and humanity. His career defined and documented the modern history of blacks in American film, and his depiction of proud and powerful characters was and remains revolutionary.

Born in 1927 in Miami, Florida, Sidney Poitier grew up in the small village of Cat Island, Bahamas. His father, a poor tomato farmer, moved the family to the capital, Nassau, when Poitier was eleven. It was there that he first encountered cinema. Even at a young age, he recognized the ability of cinema to expand one’s view of reality. At the age of sixteen, Poitier moved to New York and found a job as a dishwasher. Soon after, he began working as a janitor for the American Negro Theater in exchange for acting lessons.

While working at the American Negro Theater, Poitier was given the role of understudying Harry Belefonte in the play “Days of our Youth.” Filling in for Belefonte one night, Poitier made his public debut. This led to a small role in the Greek comedy “Lysistrata.” Though nervous and unsure of his lines, Poitier was a big hit. He continued to perform in plays until 1950, when he made his film debut in NO WAY OUT. NO WAY OUT, a violent tale of racial hatred, made him a hero back home in the Bahamas. The colonial government deemed it too explosive and censored it. The subsequent protest that erupted gave birth to the political party that would eventually overturn British rule.

Throughout the fifties, Poitier made some of the most important and controversial movies of the time. Addressing issues of racial equality abroad, he made CRY, THE BELOVED COUNTRY, about apartheid in South Africa. He later took on problems closer to home in BLACKBOARD JUNGLE and especially THE DEFIANT ONES, about two escaped prisoners who must overcome issues of race in their struggle for freedom. For his role in THE DEFIANT ONES, Poitier was nominated for an Academy Award.

In 1959, Poitier returned to the stage with a stirring performance of Walter Lee in Lorraine Hansberry’s play “A Raisin in the Sun,” the first play by a black playwright to show on Broadway. It was an insightful and moving reflection of black family life, and it had great popular appeal. Poitier would reprise his role for the Hollywood adaptation in 1961. It was not, however, until 1963, for his role in LILLIES OF THE FIELD, that the movie industry saluted Poitier with its greatest award. In an era where Martin Luther King, Jr. won the Nobel Prize and Thurgood Marshall was appointed to the Supreme Court, Sidney Poitier was the first black man to win an Academy Award for Best Actor.

Poitier followed up this triumph with an electrifying performance as a black detective from the north trying to solve a murder in a southern town in Norman Jewison’s IN THE HEAT OF THE NIGHT. Having concerned himself with elucidating the problems of racial inequality in many of its manifestations, Poitier tackled one of the great taboos of the time. With PATCH OF BLUE and GUESS WHO’S COMING TO DINNER, he focused on interracial romance. GUESS WHO’S COMING TO DINNER was the first Hollywood movie about interracial romance not to end tragically. By the time of its completion in the late sixties, Poitier was one of Hollywood’s most popular stars.

In the fallout from the assassination of Martin Luther King, Jr. and Malcolm X, Poitier became the target of criticism from segments of the black community. Accused of being too passive in a scathing article in the NEW YORK TIMES, Poitier retreated to the Bahamas to reassess his life. When he re-emerged, he shifted his energies from acting to directing. Beginning with BUCK AND THE PREACHER, Poitier directed a series of highly entertaining films, including UPTOWN SATURDAY NIGHT, LET’S DO IT AGAIN, and the classic comedy STIR CRAZY, starring Gene Wilder and Richard Pryor.

After a decade away from acting, Sidney returned to the screen in 1988 for SHOOT TO KILL. Returning to apartheid-free South Africa nearly fifty years after CRY, THE BELOVED COUNTRY, Poitier played one of the great heroes for racial equality, Nelson Mandela. In the 1997 television docudrama MANDELA AND DE KLERK, Poitier returned triumphantly to a theme he has dealt with throughout his career. After half a century in show business and fifty-five roles, Sidney Poitier’s indomitable strength and commitment shine through in everything he does: “I was saying to an audience, this is who I am; look at me.” 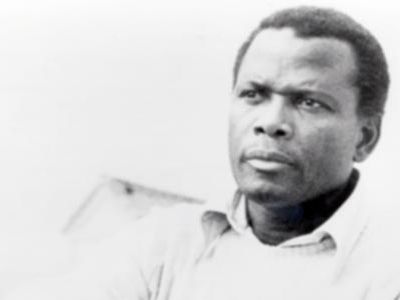 Jack Paar: As I Was Saying . . .
Yours For a Song: The Women of Tin Pan Alley
The Unknown Chaplin
Edward R. Murrow: This Reporter
George Stevens: A Filmmaker's Journey
Pete Seeger: The Power of Song