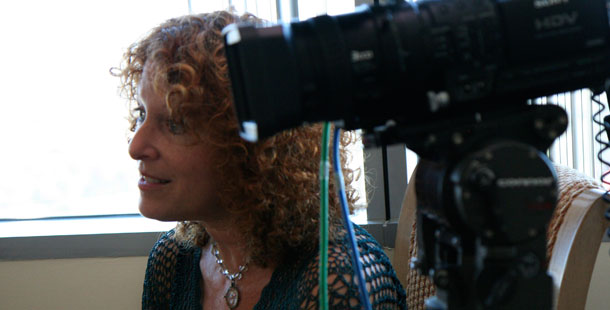 July 25th 1958 was an especially hot day.  I was called into the office of the summer camp I was attending for a call from my father.  As I stood listening to the news of my Grandpa Harry’s passing a thud happened in my universe. I could feel myself grabbing for fond memories that were turning from color to black and white without the presence of my grandfather in them.

Harry Warner was the benevolent patriarch of our family as well as Warner Bros. studio.  He helped create a most caring, solid foundation on which I stand.  I was deeply influenced and inspired by his presence in my life.

At the end of the windy road, and after what seemed like hours of sisterly squabbles and some carsickness, there was the serenity of grandpa’s ranch waiting for us.  We’d start out first thing in the morning and arrive in time for brunch, as there was no freeway from Los Angeles to his beloved ranch in the San Fernando Valley.  Pepper trees lined the mile-long driveway leading up the hill where ol’ Prince, the St. Bernard, greeted us with his massive clumsy, furry body and wet kisses.

After successfully stuffing myself with the usual brunch goodies of lox and bagels, potato pancakes with apple sauce, cole slaw, pickled herring in sour cream and onions, fresh fruit salad, and, of course, most importantly the desserts — poppy seed cake, assorted breakfast rolls, beautifully molded jello, and frosted lemon cake, I’d excuse myself to go and mount my favorite life-size deer.  She rested on her hunches with her legs tucked looking out at the panorama. As I stared with her at the racetrack, the barn and the gentleman farm below, I truly felt immortal, definitely privileged, and without borders or boundaries. Reflecting like this became something I cherished and learned to do well.  By the time I had fully indulged in this form of personal dessert, my food had digested so that I could get permission to swim.

The mention of going to the stables with Grandpa to go riding assisted greatly in getting us out of the pool.  Grandpa’s pride came shining through as he walked us down the hill or drove us on his tractor pointing things out as he went.  His pride and joy were his sleek racehorses in their immaculate stalls.  He’d stick around and make sure that we learned to stay in the saddle by gently yelling instructions as we trotted around him on old nags that were always saddled up and waiting.

I’ll never forget how honored I felt when Grandpa showed me a prize colt and told me he had named her after me.  She was the most beautiful creature I had ever seen.  Putting his arm around me as we both admired her, he told me that he KNEW she was going to be “a winner”–a moment that remains as vivid as if it happened yesterday, and a constant reminder of his belief in me.

His love and reverence for Nature and his land was mystical. His love for his animals and growing vegetables and collecting eggs, and showing us how well his fruit trees were growing were all part of knowing his kind soul.

He was the undisputed boss at the studio, but in a crowd he’d pass for a retired businessman living on a modest income.  Nothing about his appearance, manners, habits or conversations suggested a motion picture magnate.  He was described as being “folksy, without pretensions, somewhat self-conscious, sober, willful, conservative, proud, shrewd, a devoted family and a great dreamer.”  He was constantly preoccupied with his own thoughts.  He loved music, and was expressly devoted to opera. He never went in for athletics, but he was extremely fond of dancing.

The last time I saw him he laid on a perfectly starched bed in an antiseptic smelling bedroom.  A mysterious force drew me to him as if he were a candle in the dark.  It was a gentle force.  His eyes were opened and moved to take me in.  A slight smile came across his lips.  I watched his hand start to slowly move across the sheet toward mine.  My hand immediately wrapped around his.  The enormously kind look in his eyes embraced me as it always did.  I felt his grip strengthen, transmitting and sealing an important request–something of great value was being entrusted to me.  I squeezed back.  A promise was made!  It’s taken me many years to understand the magnitude and meaning of that moment.

The feeling is I was given a beautiful, strong seedling to plant, and it’s now a tree full of delicious fruit.  In other words, my understanding of my family has bore many a delicious meal.  My search for who these brothers really were, and how and what they created and why began over 40 years ago.

Brother Albert was three years younger than Harry.  He was massive, genial, but not very articulate due to him being self-conscious about his lack of education, but he carried himself like the Lord of the Manor.  He was 6’2” and over 200 pounds. He was a conservative dresser, he loved horses and he shunned personal publicity.

Early on, he worked as a soap salesman.  His idea of giving one bar of soap free for every five ordered revolutionized the business.

In 1903, he saw his first motion picture, and realized that, “If these pictures have such an appeal for me that I never miss one, I thought, it ought a be a pretty good business to be in.”  When Sam and Harry had the same idea the whole family pooled their resources, and their father pawned his watch and ol’ Bob, the horse who pulled his meat delivery wagon to buy their first projector.

In a Screenland article dated 1928, it states the Warner slogan was:  “One for all and all for one.”  They quote Albert stating, “I attribute our success absolutely to the fact that we brothers have stuck together, a mandate that our father taught us early on.  One of us always managed to work and supply the rest with money while the others were digging something up.  We landed in Youngstown, Ohio, in the 1890’s.  Father was a shoemaker, and Harry and I learned the trade with him.  None of us brothers finished public school.  We had to help keep the home fires burning.”

He was the Vice-President and in charge of sales and distribution and was known as “Honest Abe.”  He liked to think of the studio as “The Ford of the movies.”

Brother Sam was four years younger than Albert.  At ten years old he sold papers, and later worked as a fireman on the Erie Railroad.

At the age of 16, he obtained the position of manager of an amusement company that played “The Great Train Robbery”, the famous one-reeler of its day, which inspired him to get into motion pictures.

He was a “charming personality with self-sacrificing qualities,” and was known for his fair business dealings and geniality.  Sam had always been “the plunger.”  He was reckless.  He had ideas.  He could visualize empires.  He saw what could be done, but sometimes he couldn’t get his plans beyond dreams.  His biggest contribution to the quartet was his visionary quality.  It was said, “he needed his brothers as stabilizers.”

He was six feet tall, a snappy dresser, was a great hit with the girls, an idea man with a wild sense of humor, and the best-read of the clan.  He was charming, self-sacrificing, fun loving, and managed to keep the peace between Jack and Harry until his untimely death.  He was “the dreamer who could grab a handful of clouds and weave them into a magic rug.  He never talked big, but his mind was like a periscope.  He could look around corners and see things coming.”

And then there was baby brother, Jack, who was four years younger than Sam.  Bitten by the showbiz bug, at the age of twelve he earned $12 a week as a boy soprano singing illustrated song-slides in a nickelodeon and later joined a vaudeville troupe for $18 a week.  He warbled with an adolescent trill, thus making him an effective crowd-chaser between acts.

Jack said, “Music must’ve been the catalyst that brought out the ham in me.  I clowned, sang, danced, and talked.  My mother once became so exasperated with my behavior that she offered me two bits if I would keep quiet for five minutes.”  He said singing helped keep him from becoming a full-time hood. He was a member of a gang in Youngstown, Ohio, a teenage mob led by a junior Dillinger whose name was “Toughy McElvey.”

He was always tan, physically strong, and very conscious of himself, which he tried to cover up by making jokes. He has been called “a frustrated standup comic and a notorious prankster hiding an inordinate sensitivity behind a clown’s mask,” as well as “a tragic character in Macbeth.”

He looked at making movies like it was any other kind of factory production requiring discipline and order rather than temperament and talent.  His job was to make 60 pictures a year.  His specialty was hitting budgets on the nose.  His philosophy was “Let’s compromise.  Let’s do it my way.”

The richness of these characters, their dreams and the difference they made in communicating through film lives on.

–Cass Warner Sperling authored the book, The Brothers Warner formerly known as, Hollywood Be Thy Name: The Warner Brothers Story, and is President of her independent film company, Warner Sisters.