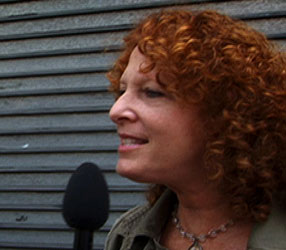 Q: What first got you interested in doing a film on the Warner brothers?

A: Several reasons: My grandfather, Harry Warner, was very much around the first 10 years of my life as we spent almost every weekend on his ranch just out side of Los Angeles. He was very much a family man and patriarch. He impacted my life greatly and was a key figure– someone I knew deeply cared about me and whom I greatly admired. My father, Milton Sperling, was a write/producer and worked on the Warner Bros. lot and shared dramatic stories of him refereeing between my grandfather and his youngest brother, Jack. Then there was going to the studio lot, and seeing what a bustling creative city was going on, and being fascinated and puzzled by how these brothers were privately bitter enemies but were able to be a phenomenal team when it came to business. I, also, didn’t see anyone in the family interested in telling or recording their tale which I knew was important to preserve and know.

Q: When did you first become aware of this story?

A: As a child realizing who my family was and discovering my grandfather’s trophy room, and loving to hear him tell stories of their history and looking at photos from his enormous scrapbooks.

A: Very much so! It’s been a most personal journey full of deep understandings of the inner workings of my family–their trials and tribulations, their personalities and philosophies; and why they created the films they did. From this I have learned total respect for their creative integrity and their ability to stand up to adversity and solve huge problems that could’ve easily prevented them from reaching their goal. Like prize fighters they never quit despite the odds against them to succeed. They gambled everything many times to make their dream a reality. This was truly amazing to me.

Q: Are there any interesting anecdotes about the filming of the interviewees?

A: When I was researching and trying to find people who knew the family for my book in the early 1980’s, I discovered that I had a Great Aunt Lina–Sam Warner’s young starlet wife. I immediately called her, and she agreed at the age of 80 to leave her Great Danes behind and drive her station wagon in to New York City from Wheeling West Virginia to meet me at a hotel. I jumped on a plane and when I entered the cafe at the hotel, all I saw was a crowd of waiters around a table. There she was successfully flirting with them all– literally batting her fake eye lashes in her elegant way. We ended up staying up all night talking like school girls in her room. She was a treasure of information as no one else was still alive who knew Sam nor had witnessed what had gone on in the mid-1920’s when the brothers gambled everything on Vitaphone and “The Jazz Singer.” It was a priceless experience!

Q: Describe your approach to the film.

A: Being from the world of independent film making and starting out with a written, detailed script was what I was used to. In making a documentary, I discovered that it’s the material–the answers, and the visual material that gives you your story choices. I learned the art of asking questions, and being able to solicit answers to create the script I had in mind. It was like making a collage with liquid material. My approach was to allow the audience to get inside the skin of the brothers, to correct history, and to inspire film makers today with my family’s example of film choices reminding those responsible for making media that there is an enormous ability “to educate, entertain and enlighten”–the brothers’ original motto for their studio.

A: What I learned from my family’s way of overcoming obstacles is the ability to turn a barrier or stop into an incentive to do the next thing. My biggest challenge was narrowing down the choices in which to cover over 50 years of their life. I felt as if I had this beautiful slab of priceless clay to sculpt with. I had to trust that the clarity and quality of the communication would come through as we molded things together. With the assistance of my magnificently able editor, Kate Amend, the film surpassed my original vision in the end.

Q: Describe my background credits, how maybe they led to this film?

A: Being born into and surrounded by the film making business all my life, I consider a nice background credit. My father, Milton Sperling, as a writer/producer would often work from home and allow me to sit in on his story meetings. Even though I was a child, I felt excited by being included and seeing what fun writing was. I studied acting under Robert F. Lyons and Milton Katselas, and took screen writing class with the likes of Howard Koch of “Casablanca” fame. Being the family private investigator, meeting characters who knew the family I wrote about in my non-fiction book, “Hollywood Be Thy Name: The Warner Brothers” now titled “The Brothers Warner” was great research and, definitely, inspired my dear documentary.