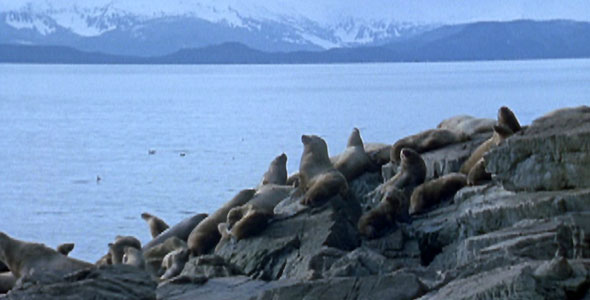 Wildlife filmmaker Shane Moore has been documenting the natural world for nearly three decades, sometimes hauling his equipment halfway around the world. But NATURE’s A Mystery in Alaska marks the first time that Moore has played a leading role in one of his own films — in this case, leading viewers through the thicket of often conflicting explanations for why Alaska’s once booming Steller’s sea lion population has fallen on hard times. He stepped into the role only after the show’s planned host, a veteran biologist, died unexpectedly.

The experience, he says, gave him “a new appreciation of just how hard it is to decide what you want to say and be sure that what you are saying is correct. It was remarkably stressful … but we felt we needed someone to lead people through the story.”

In 2003, Moore spoke with NATURE from Wyoming, where he was working on a new film about grizzly bears.

How did you get interested in the sea lion mystery in Alaska?

Well, I had worked in Alaska a lot, and when I heard about the sea lion’s [decline], it was devastating. Something pretty drastic was going on.

My love of sea lions started when my wife Lybby and I made a film in Alaska in the early 1990s. We wanted to film sea lions in the water, but people up there try to avoid sea lions like the plague, because they can really scare you when you are underwater. They seek you out. So, I thought I was going to be torn to shreds. The animals were pulling on my [diving] fins, jostling me, pushing on my camera. But I was really taken with them. And after diving with them quite a lot, I got taken with them even more.

Eventually, I went out [with scientists] on several capture trips, where we would try to put instruments on sea lions. Once we went for three weeks and didn’t have much luck. So we started talking about how we could catch them relatively easily underwater. It took several years to get all the permissions, but now they can go out and catch a dozen sea lions in a day. [As a filmmaker] who feels like I pester scientists a lot, it was nice in this case to be able to help out a little.

Researchers have put forth a number of theories for the sea lion decline. How did you deal with that debate without getting sidetracked or leaving viewers confused?

It’s a huge challenge to treat the science fairly, but keep a foot rooted in the audience’s world. If we just did talking heads and scientific debate, that would turn off a lot of people. So we had to weave our way through that.

We had planned to have Walt Cunningham, who had worked as a biologist and a fisherman in Alaska, narrate the film, and lead us through all the complexity. But toward the end of our filming, Walt was killed in a diving accident. That was a real setback. We searched for other [narrators], but couldn’t find one. So that task fell to me. And we felt it important that at the end of the film that we offer an opinion of what was happening. We had looked through maybe 50 pounds of scientific papers, and traveled all around the state. So we made some conclusions at the end of the film.

When we started, I was fairly convinced that these huge [pollock] fisheries [caused the decline]. But as we went along, I realized it was pretty complicated. The bulk of the initial decline could have been a natural cause [such as climate change]. And these cycles may have been going on for thousands of years, and we’re just starting to look into them. Also, pollock stocks appear to be increasing all over the state so the pollock fishery doesn’t appear to be playing the major role. It looks like the herring populations play a bigger role.

Now, some people may not agree with my take that the pollock fishery isn’t responsible [for the sea lion declines]. But that explanation doesn’t seem to fit the evidence.

Is working off Alaska difficult?

One of the first things we realized is that chartering boats in Alaska can cost upwards of $1,000 a day. So we knew we couldn’t afford to make a film that way. And the weather can get bad, so often you are stuck on an anchor for a week at a time. So we decided to buy our own boat — an old trawler — and live on it for a year. That was an adventure. I had never run a substantial boat before. But it allowed us a lot more time in the field. We sold it at the end.

What were some of the hardest shots to get?

The filming of the fish [and sea lions and birds feeding on fish] took months. We had a good depth sounder on the boat, but we would also take a lot of our cues from the wildlife, for instance looking for birds feeding. We spent many hours cruising around looking for the slightest signs, and a lot of time in the water. We had to use rebreathers [diving equipment that doesn’t produce bubbles] because the fish are afraid of bubbles. Still, getting shots of [predators] feeding on the herring was really difficult. We’ve even donated some of our footage to scientists who are studying how sea lions and birds feed on herring.

Where do you enjoy working the most?

The High North is really my favorite place, Alaska and the Canadian Arctic. Most of the places we go to film, we’re working in a pocket of wildness in a sea of humanity. It’s a bit distressing to film isolated patches of wildlife that are often in trouble. We often crop out all the problems and show some idyllic bit of nature or some behavior. But Alaska is the opposite — it’s phenomenal wildness with pockets of humanity.

Will your film influence the debate over what to do about the sea lion decline in Alaska?

My hope is that, at the very least, we help create a general awareness about this issue. The bulk of the public doesn’t have clue that this problem exists. People know about [threats facing] the spotted owl or wolves. But this is a story that has gotten hardly any attention.