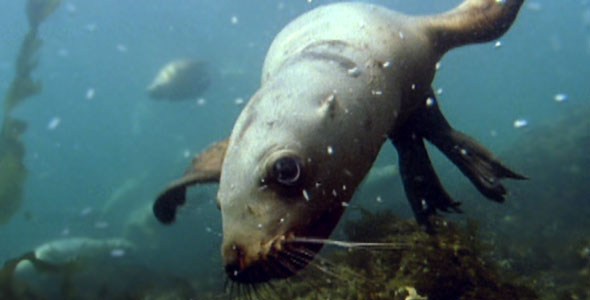 In making NATURE’s A Mystery in Alaska, filmmaker Shane Moore consulted with an array of scientists who have been studying different facets of the issue. One is Gary Thomas, a fisheries scientist who spent more than a decade examining how fish, their food, and their predators — including sea lions — interact in Prince William Sound in southeastern Alaska.

Thomas says his team’s work, which included surveying fish populations using sonar and documenting night-time behaviors of fish-eating wildlife with infrared cameras, has helped highlight the important role that herring play as a food source for sea lions, particularly in the brutal winter months when other food is scarce.

In 2003 NATURE spoke with Thomas, now a professor at the University of Miami, about his work.

How did you get involved in the mystery in Alaska?

I went up to Prince William Sound after the 1989 Exxon Valdez oil spill to study plankton, fish, and wildlife populations using an ecosystem approach. I’ve always worked on protecting wild fish stocks, but one reason we’ve had trouble sustainably managing stocks is that we simply don’t know how many fish we have. I was interested in developing some better ways, using acoustic and optical systems, to measure population sizes and relate them to changes occurring in the ecosystem.

What did you find?

One thing that fell out of it all was that herring are a key winter food fish for many fish and wildlife species. The herring populations aggregate in the sound over the winter, until spawning time in the spring. We used underwater sound to repeatedly monitor the fish populations, and in winter we found over 90 percent of the sound’s population of herring concentrated in less than one percent of the area in which you would find them in the summer. We also observed many predators around the herring, such as sea lions, humpback and killer whales, and birds. After a decade of surveys, it was clear that many fish predators [including sea lions] aggregate around the herring.

Beginning in 2000, we used [infrared cameras] to document that, during winter, the sea lions and other predators primarily hunt the herring at night. The herring swim up to within 30 feet of the surface at night, while most of your other fish species are out in much deeper water. So you’ve got one of the most desirable fat-rich forage fish in the Pacific Ocean coming in close to the shoreline — it makes sense that it is going to be a target for most of the fish eaters.

Particularly in the winter, when food limitation is a problem and these animals are most stressed, herring is critical food to sea lions. Every place where we’ve looked at herring aggregations in the winter, we have found that these places are hotbeds of fish predators. It’s not the whole picture on sea lion foraging, but it’s a big part of it. The major problem is that herring is also an important commercial fish, so you need a reliable way to manage catches. Traditional methods used to predict herring abundance don’t work very well. The [population] predictions can be so far off, it’s like playing Russian roulette with your herring stocks to use them to set harvest limits. Sometimes the errors are so great that it allows the fisheries to take the bulk of the spawning stock, and sometimes they are only allowed to harvest a small part of what is available.

Well, I think we’ve shown you can use [sonar-based] methods to make accurate population estimates in the late winter or early spring. And if you use those estimates to set your harvest, you could protect the spawning stock.

Has that idea caught on?

Some people are experimenting with it. But sometimes it takes a while for the management to catch up with the science.

What has been the effect of the herring fishing ban? And what comes next?

The [herring] stock is recovering but [only] after reaching precariously low levels of less than 5,000 metric tons two winters ago. The mammal and fish predators can easily take that much in a year, so recovery was in doubt. Last year was the first positive recruitment and this year looked even better.

If they allow these young fish (3 and 4 year olds) to mature and grow for a few years without a fishery, say until they are 6 and 7 years of age, they might be able to sustain a fishery again. But I would probably favor the elimination of purse seining [catching fish by using a type of encircling net]. Purse seiners are so effective at catching herring, and they handle such large quantities of both small and large fish, that they are difficult to manage. Also, the seiners tend to “high grade,” or repeatedly seine up small fish in order to catch the more illusive and valuable larger fish. High grading is extremely tough on the small fish and there is good evidence to suggest it can damage the population. [Once the ban is lifted,] I would have the fishers use gillnets, which are much more selective for size of fish and less likely to catch more than the quota.

You’ve recently moved to Florida — what are you working on now?

I’m looking to set up coastal fisheries monitoring programs around the world using the approach and techniques we developed in Alaska. We showed in Prince William Sound that we could learn a great deal about how the ecosystem [operates] by studying some major populations. Other people and places could benefit from that approach too.

Equus "Story of the Horse" | Episode 1: Origins
The Good, the Bad, and the Grizzly
Sharkland
Running With The Herd: A NATURE Short Film
Natural Born Rebels | Episode 1| Hunger Wars
The Elephants of Africa